Disgraced German soccer referee Robert Hoyzer, who has admitted accepting bribes to manipulate matches, was arrested by police on Saturday amid fears that he would try to flee the country. 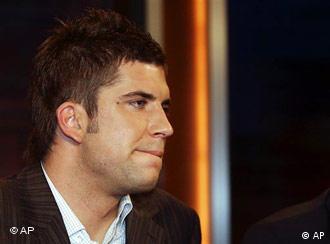 Berlin prosecutors confirmed a warrant for Hoyzer's arrest had been issued on Thursday and that he was taken into custody in the German capital two days later.

State prosecuter Michael Grunwald justified the arrest by claiming new evidence had come to light that could persuade the official to go on the run.

Hoyzer, 25, has admitted fixing four matches between May and October of last year and two Croatian brothers with strong mafia ties have been arrested in connection with the scandal.

However, new evidence suggests Hoyzer had actually been involved in manipulation prior to 2004 working in collaboration with other parties besides the Croatian mafia.

Hoyzer fears for own life

Hoyzer admits he fears for his life if sent to jail, insisting the Croatian mafia are very unhappy about his willingness to disclose details.

"I am afraid of jail as I know the Croats are dangerous," he told Bild tabloid. "I have thought of committing suicide."

Hoyzer was paid a "finder's fee" by a Croatian mafia circle in Berlin, according to Focus magazine. He is reported to have banked €10,000 ($12,850) for corrupting a Bundesliga referee with €5000 the purse for performing a similar task on a lower division official.

How many referees Hoyzer corrupted is uncertain but three officials, Felix Zwayer, Dominik Marks and Jürgen Jansen are under investigation for rigging matches.

Jansen is a Bundesliga referee while Zwayer and Marks officiate matches outside the top-flight.

"I protested my innocence at the beginning," Hoyzer said. "But I really am surprised that the others can handle the pressure."

A mass police raid on the premises of 19 football match-fixing suspects has uncovered more proof of manipulation, the Berlin public prosecuter's office confirmed on Wednesday. (Feb. 2, 2005)

Opinion: A Shadow Over German Soccer

German soccer has struggled recently. As Bundesliga teams flounder in Europe, the national side is trying to rebuild after a devastating Euro 2004. German referees were the only thing considered world class. Not anymore. (Jan. 31, 2005)

Robert Hoyzer, the referee in the middle of Germany's biggest soccer scandal for 34 years, admitted match-fixing on Thursday, a day after suspicions of mafia involvement were raised in the case against him. (Jan. 27, 2005)