An Italian family from Sardinia pays a visit to the German capital – two adults, three children, 10 days, and thousands of ways to experience what Berlin has to offer. 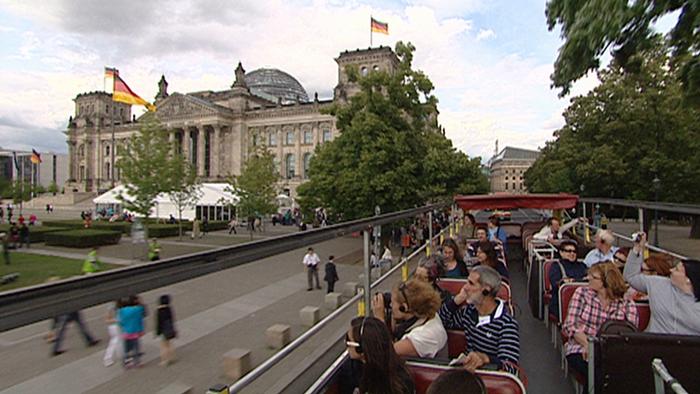 On their first day, the Pinna family sets off on their exploration with a tour of the city on a double-decker bus that passes by many of the city's famous landmarks, including Brandenburg Gate, the Unter den Linden boulevard, and the East Side Gallery, which is the longest surviving stretch of the Berlin Wall. On the way, they pay a visit to the AquaDom, which is the world's largest cylindrical aquarium, and a museum that shows what life was like in the former East Germany. When night falls, the Pinnas take in a musical at the Theater des Westens.

Hamburg’s centrally located harbor date back to the Middle Ages and is a major economic center linking the North and Baltic Seas. Today the city is also Germany’s capital of musical theater. (22.10.2012)

With its mountains, valleys, and caves, the Fränkische Schweiz or Franconian Switzerland is a natural paradise. It can be viewed at leisure on an old steam locomotive running between Ebermannstadt and Behringersmühle. (18.10.2012)

Cobblestone streets, narrow alleys, and stairs can be serious obstacles for travelers with disabilities – but Erfurt, one of Germany’s largest medieval cities, is trying to improve accessibility. (15.10.2012)