A rare painting by legendary musician David Bowie, found at a thrift store and initially bought for just a few dollars, has sold for tens of thousands at an auction. 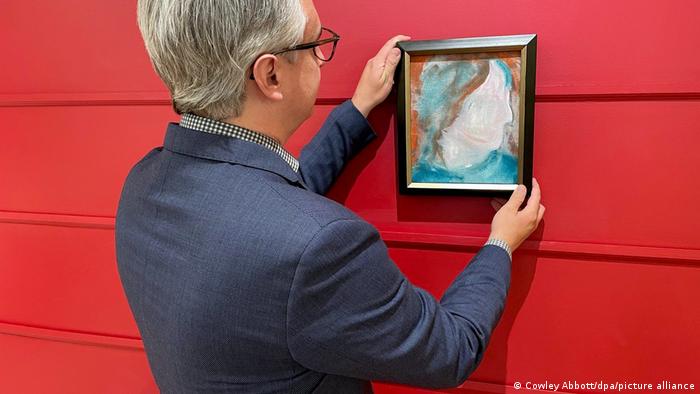 The painting bought for a few dollars is likely to sell for more than 10,000 times that amount

David Bowie was an exceptional artist. Besides influencing generations of musicians, he created his own fashion aesthetic, acted — and painted.

Between 1995 and 1997, he created a series of 47 paintings, which he called Dead Heads or DHeads. Portraying band members, friends, acquaintances and himself, each piece included a non-sequential Roman numeral. The series was most likely inspired by his Ziggy Stardust phase.

And now, DHead XLVI sold for a handsome price.

The vibrant red-and-blue acrylic portrait is painted in neo-expressionist style.

It remains a mystery as to how the 20 to 25-centimeter painting ended up at a donation center for household goods just outside the town of South River in Ontario, Canada.

An anonymous buyer found it among the various household items and paid just CDN$5 ($4/€3), and was astonished to discover Bowie's signature on the back, signed in 1997.

The buyer then contacted the Canadian auction house Cowley Abbott, who had specialists to confirm the painting's authenticity. "We were very excited when we discovered that the artwork was original and genuine," auctioneer Rob Cowley told the AFP news agency.

"We are fans of Bowie's work and are delighted to bring a piece of his art to the market." This DHead painting is said to have been sold through Bowie's official website in 2001 or 2002.

Though the work was originally estimated to sell for between CDN$9,000-$12,000, bidding quickly surpassed this estimate on the very first day of the auction itself.

Bowie himself was an avid collector. "Art was quite seriously the only thing I ever wanted to own," he said in an interview with The New York Times in 1998. He was never concerned with the material value, but rather with the beauty of the works.

His private collection included paintings by Renaissance painter Titian as well as by Erich Heckel, Francis Picabia and Damien Hirst. Some of them have already been sold for record sums.