DHL Plane Struck by Missile in Baghdad | Europe | News and current affairs from around the continent | DW | 22.11.2003

An Airbus jet belonging to the German courier service DHL makes an emergency landing in Iraq after being fired upon by a surface-to-air missile. 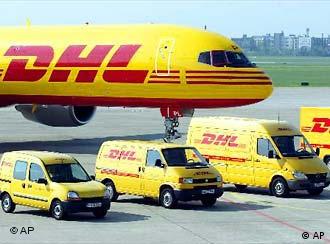 DHL was the first company to bring commercial package delivery to postwar Iraq.

The U.S. military confirmed Saturday that a shoulder-fired missile struck a jet operated by express courier service DHL over Iraq. The plane’s engine caught fire and it was forced to make an emergency landing at Baghdad International Airport. None of the jet’s crew were injured in the incident.

An official said the civilian Airbus 300 cargo plane was struck by a SAM-7 ground-to-air missile shortly after takeoff on a flight between Baghdad and Bahrain. The plane’s engine was visibly burning and it left a massive trail of smoke as it landed at the airport.

"At approximately 6:30 GMT this morning, a DHL aircraft, an Airbus A300 freighter, departing from Baghdad to Bahrain, had to return to Baghdad and effect an emergency landing," company spokeswoman Patricia Thomson said.

Later on Saturday, DHL, which is owned by Germany’s former postal monopoly, Deutsche Post, said it would temporarily suspend flights to Baghdad.

"DHL has made the decision to suspend all flight operations to Iraq for at least the next 48 hours," spokeswoman Patrician Thomson told the news agency AFP.

The Jordanian carrier Royal Wings, the only commercial airline offering passenger service into Baghdad, also suspended its flights on Saturday.

Authorities said they have launched an investigation into the attack, which marks the first time a civilian plane has been forced to land as the result of violence in postwar Iraq. There have been eight reported instances of ground-to-air missiles being fired at civilian aircraft in Iraq, but this was the first incident to force a plane down.

"Pending the finding of the investigations, as well as the full assessment of the security situation, DHL will then be in a better position to conduct a further review on how to continue any operations in Iraq," Thomson said, adding that the company did not want to put its employees at risk.

Many observers said it was only a matter of time before a incident like Saturday’s would occur. In recent weeks, a number of military helicopters have been shot down with similar weapons, a propaganda coup for Iraqi groups resisting the country’s U.S.-led occupiers.

Missile attacks have long been anticipated, and pilots flying into Iraq use a special spiral landing technique designed to stave off attacks. Pilots reduce their altitude to 4,500 meters above the airport and immediately begin a circular landing pattern that involves sharp banking turns and brings them to the ground within 4.5 minutes. Because the missiles travel faster than the jets, they also require more space to maneuver, so the landing pattern makes it much harder for a missile to hit its intended target. The maneuver, however, cannot protect planes at the time of take off or when they prepare to begin the landing procedure.

With flight in Iraq still wrought with peril, most people traveling into the country come by ground. There are charter planes for workers affiliated with non-government organizations and journalists, but most fly into Amman and finish the remainder of the 880-kilometer journey by bus or other ground transportation.

The threat of missile attacks has thus far kept officials from reopening Baghdad Airport for commercial passenger service, despite interim Transport Minister Behnam Polis’ request that it be opened for traffic.

Managing the logistics of occupation

Nonetheless, the U.S. military has relied heavily on DHL’s fleet of Airbus A-300, Antonov AN-12 and Boeing 727 aircraft to deliver equipment, mail and other essentials to Iraq. DHL is one of the largest mail and supplies delivery contractors for the U.S. military in Iraq, with multiple daily flights into Baghdad carrying as much as 50 tons of daily letters between soldiers and their families.

There are currently 110 flights into Baghdad each day – 70 official or military and 40 civilian or cargo jets, according to the news wire Agence France Presse.

German airline LTU became the first western carrier to resume non-stop flights to Afghanistan in August. But a German pilots' group says the flights are reckless because the planes are exposed to shoulder-fired missiles. (Sept. 1, 2003)

Terrorism experts say Thursday's attack in Kenya used a weapon that was "cheap, nasty and easy to use." It certified fears that a similar attack could occur on European soil. (Nov. 22, 2002)