Germany's football association, the DFB, has crowned Reinhard Grindel, the only candidate to succeed Wolfgang Niersbach. Despite some murmurings of discontent before the vote, he was elected overwhelmingly in Frankfurt. 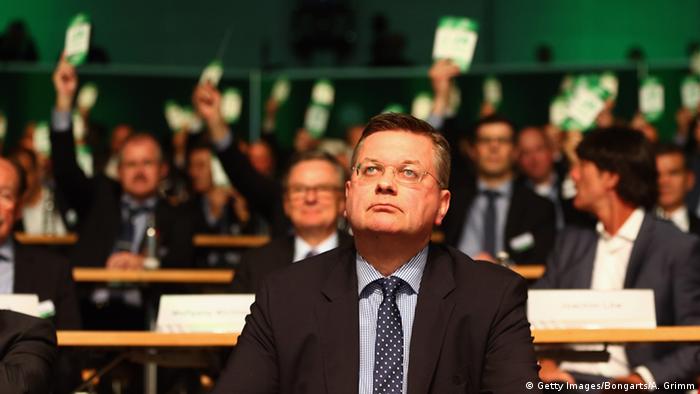 Grindel was elected the DFB's 12th president in Frankfurt on Friday with 250 votes in favor, four against and one abstention. Grindel, a conservative career politician from northern Germany and relative latecomer to the football world, formerly served as the DFB's treasurer.

The 65-year-old takes the reins at a difficult time for German and international football, following Niersbach's resignation amid allegations of impropriety in Germany's successful 2006 World Cup bid. Friday's "extraordinary" DFB congress - meaning simply that it was unscheduled - was called in the wake of Niersbach's resignation to temporarily choose a successor. Grindel will also need confirmation in a vote at the scheduled annual congress in November. 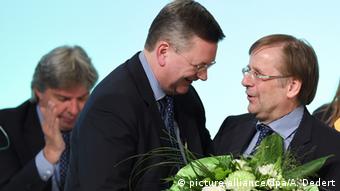 Grindel is giving up a Bundestag seat to head the DFB

"There are tasks which are more important than we are: such as ensuring that football has a bright future, both in the Bundesliga and in the Kreisliga," Grindel told delegates, referring to semi-professional and amateur lower leagues in Germany. He was speaking at conference room in the Frankfurt Congress Center named "Harmonie" (Harmony), a fitting venue given the tensions within the DFB and world football.

Grindel, also a politician in the German government, will give up his role as a member of parliament in the German Bundestag to avoid any conflict of interest at the DFB.

"With his journalistic and political experience, Reinhard Grindel will keep the DFB on course," de Maiziere said, urging further progress from the DFB in clearing up allegations surrounding the 2006 bid. "Good collaboration between the amateurs and the pros should also be a priority for the DFB."

Resistance to Grindel's appointment in the run-up to the vote seemed to hail from the Bundesliga clubs and the professional element of the DFB's congress. The pros are drastically outnumbered by the amateur members of the federation, and the president of the German Football League (DFL), Reinhard Rauball, had been particularly vocal about his concerns. 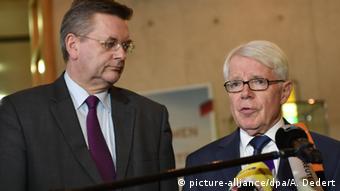 On Friday, the DFL boss said he was pushing for changes to the format of the German Cup. He sought to make the suggestion appealing to the new DFB boss, in charge of the German national team, by saying that the pros needed more time, "perhaps also so that they can be a better advertisement for German football on international duty in the summer."

Grindel also told the assembly on Friday that he would continue to chase a key target for the DFB for 2024.

"League and amateur members alike, we will collectively pursue our primary goal - bringing the 2024 European Championships to Germany," Grindel said. To do this, he warned, any remaining 2006 skeletons would need to be aired.

Clearing up this issue "thoroughly and sustainably" would be the necessary precondition "in order to be able to apply for this tournament with UEFA with renewed integrity," Grindel said.

On Friday, the DFB also chose Stephan Osnabrügge to replace Grindel as treasurer. Friedrich Curtius was unanimously voted in as secretary general.

According to the German FA's interim president Rainer Koch, 54-year-old Reinhard Grindel will be confirmed as Wolfgang Niersbach's successor in April. Grindel has the unanimous backing of the DFB's delegates. (03.03.2016)

DFL throws support behind Grindel, use of video

Germany's professional football clubs have agreed to support the German FA's treasurer as its next president. They have also agreed that the Bundesliga should take part in the testing of the use of video replays. (11.02.2016)