Deutsche Welle is continuing its restructuring process. The strategy focuses on changes to DW's language offerings and TV magazines as well as the introduction of dialogue- and comment-based formats. 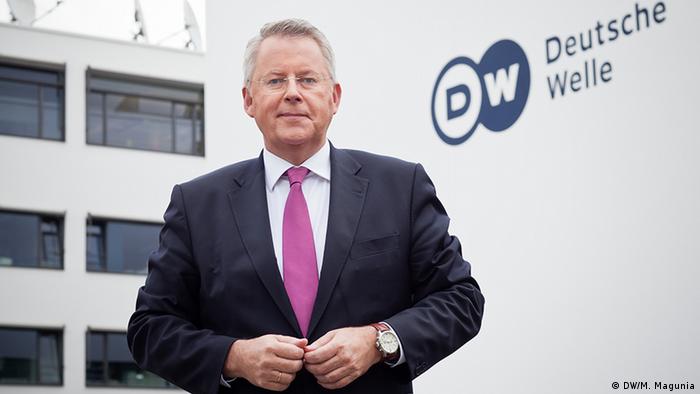 "In order to reach our goals for the coming four years, we have to create the right conditions in our departments now," DW's director general, Peter Limbourg, told staff in Berlin and Bonn on January 20. On January 17, the broadcaster's leadership agreed on a series of reforms. "They will create the framework in which we can realize our concept of creative and modern journalism and position ourselves as a global information provider based in Germany," Limbourg commented.

The proposals concentrate on content in English as well as in languages that have proven successful for DW. English is intended to become the journalistic "flagship" language, meaning the English department's offerings will be expanded to make it internationally competitive. A core goal for DW is more successfully reaching its target audience of decision makers and political opinion leaders worldwide. Meanwhile, the German-language TV channel will be changed to feature more news content and clearer programming structures. "German remains an important language for DW," said the director general. A German-language community will be built up on dw.de, and Deutsche Welle's German courses will be expanded.

Limbourg announced that DW will redirect its finances internally so as to reach the areas that are being prioritized, a process that is set to begin step by step this year. "We aren't making a clear cut. Instead, we've developed a responsible and smart concept that will allow us to achieve our goals and maintain DW's excellent regional and language competencies," he said.

The plans are designed to strengthen DW’s English content within the international media landscape. The broadcaster's regional focus will be on Afghanistan, China and Iran in Asia, as well as Africa, the Arab World, Russia, Latin America, Turkey and the crisis zones within Europe.

Based on these decisions, the linear TV and online content will be heavily expanded in English. DW's TV news coverage is set to increase significantly, and the news will be broadcast more frequently. DW will reduce the number of shows it produces, while elevating the quality of the remaining formats. In all of its target areas, DW plans to continue offering regionalized content and to increase the number of relevant programming segments. Within the offerings for Asia and Africa, programming will emphasize certain topic areas - for example, there will be a business show for Asia. The necessary regional competence will be secured by retaining journalists from language departments that are being cut or reduced. DW's social media activity in English will be intensified, and its English-language radio production limited to shows intended for African FM partner broadcasters.

DW will continue to offer original content on television and online in German. However, the expenditures in this area will be reduced, while cooperation with German national public broadcasters ARD, ZDF and Deutschlandradio will be increased. With its German-language offerings, DW offers a key service for all those who live abroad and speak German, including for German nationals and those with German roots.

Within its online offerings for regional target languages, DW will switch to a personalized blog format featuring dialogue and comment functions that will also be optimized for mobile devices. "We're after successful journalism that takes a stance, and we're seeking a direct interaction with our target audiences," said Director General Peter Limbourg. The current thematic breadth of DW's online content in these editorial departments, which currently produce comprehensive news and background material, will be left behind in favor of strong commentary pieces from a German perspective.

"In many countries, wide-ranging information is available about Germany, but what's lacking is context and commentary. That's what people there expect from Germany's international broadcaster. We will provide our target users with pointed commentaries on relevant global, regional or bilateral events and developments, communicating German positions on issues and entering into dialogue with them," the director general said. He added that DW will remain anchored in the respective target areas as a journalistic brand and that its offerings can be flexibly expanded - for instance, when a regional crisis demands it. The regional expertise in the existing foreign language editorial departments is set to remain intact and will be channeled into offerings in English.

The journalists covering European affairs in individual departments will be grouped into a single European editorial department. It will create regionalized content for European crisis regions, and, at DW's headquarters in Bonn, it will also produce an emotional and visually expressive TV magazine dealing with European politics. This magazine will serve as a template for adaptation into all of DW's European languages.

In its global target regions, DW will adapt its activities region by region and change its offerings accordingly.

Departments not set for restructuring

Numerous language departments at DW will remain essentially untouched by the structural changes. However, further work will be undertaken to increase the quality of their offerings and the number of users within the target audience. For example, social media activities will be further developed, and more videos and mobile content will be offered. This goes for editorial departments in the following languages: Dari, Pashto, Farsi, Chinese, Kiswahili, Hausa, Amharic, Arabic, Spanish, Portuguese for Brazil, Russian, Ukrainian, Turkish, Greek and Polish - the budgets of which will remain largely unchanged.

Several language departments face structural changes: Online offerings in Albanian, Bosnian, Bulgarian, Croatian, Macedonian, Romanian and Serbian will be switched to a personalized, dialogue-based blog format with comments. The European TV magazines in these languages will be maintained, but radio broadcasts in Albanian and Croatian will end.

In the future, DW will address its target groups in India and Pakistan primarily in English. Manthan, a science magazine format for TV in Hindi, will continue, but the Hindi website will be shut down. Radio offerings in Urdu will focus on the educational Learning by Ear program, and Urdu-language evening radio broadcasts will be preserved for the time being. Both the radio broadcasts via shortwave and the website in Urdu will shut down.

The Indonesian science magazine for TV, Inovator, will initially continue, and checks will be undertaken to see whether parts of the new English TV channel can be subtitled in Indonesian. The Indonesian website will also be reduced to a personalized, dialogue-based blog format with comments. The same goes for the French for Africa website. Production of radio broadcasts in French will be switched back to FM formats for selected partner broadcasters in Africa.

The management at DW also put all of the TV shows that DW produces and broadcasts up for scrutiny. The major criteria were the extent to which the TV magazines enhance DW's profile and what their potential scope is. As a result, the decision was made to end the shows PopXport, Agenda, World Stories, Germany Today, Insight Germany, People and Politics, Kino and Talking Germany in the future. This applies to the editions of these shows in all four languages in which DW broadcasts linear TV, namely German, English, Spanish and Arabic. The topics covered in those programs will be explored in other content. The business magazine Made in Germany and the talk show Quadriga will be fundamentally reworked and restructured.

The programs Euromaxx, Tomorrow Today, Global 3000, In Focus, In Good Shape, Drive it!, Shababtalk, On the Pulse, Discover Germany, Shift, Kick Off! and Kick Off! Countdown, Europe in Concert, European Journal, Arts.21, Business Brief, The New Arab Debates, Claves, Treasures of the World, Close up and Faith Matterswill continue to be produced in all their current language versions.

Deutsche Welle will strive to bolster its TV offerings by introducing interactive formats and a talk show that will further enhance the broadcaster's reputation. Consideration will be given to which ideas developed by DW staff members could be put into practice for the TV station.

The cornerstones of the new strategy and the measures necessary to put it into place will be included in Deutsche Welle's planning from 2014 to 2017. At the latest, their implementation will begin once the Broadcasting Board has formally approved the plans.

In the coming weeks, DW will clarify in more detail what the proposed measures will mean financially and in terms of personnel. In some areas, such as the English department, staff numbers will increase. It cannot yet be determined to what extent jobs will be lost, because it remains unclear how much of a grant the German federal government will provide to DW. The broadcaster's management will do all it can to retain as many of its employees as possible.