Germany's main railway operator can now drop threats to sue two of its rolling stock manufacturers: Siemens and Bombardier have agreed to design new axles for its fleet of ICE-3 trains. 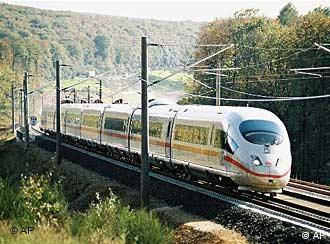 All ICE-3 trains will be fitted with new axles

After months of negotiations, German rail company Deutsche Bahn has reached a deal with manufacturers Siemens and Bombardier to replace the axles on its fleet of high-speed ICE-3 trains.

The old axles were deemed faulty after an accident in July 2008, when a cracked axle caused a train to derail as it was leaving Cologne station. No one was hurt in the accident, but the frequent safety checks that ensued disrupted Deutsche Bahn's high-speed train service for months, and cost the company an estimated 350 million euros ($520 million).

Deutsche Bahn threatened to sue Siemens and Bombardier if they refused to share the cost of replacing a total of 1,200 axles. The three companies are refusing to say just how the costs have been split in the deal they've reached. German newspaper Die Welt quoted an insider as saying the costs would be spread in such a way that no single company loses face. 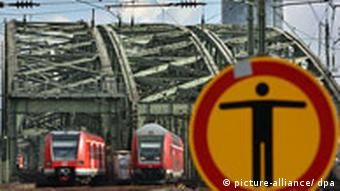 A cracked axle caused a derailment in Cologne

It will be several years before all the existing axles have been replaced, an unnamed source confirmed to Die Welt. Until then, the fleet will continue to undergo ultrasonic maintenance checks five to 10 times more frequently than planned when the trains first entered service. That means customers will continue to feel the effect of having fewer or shorter trains in service.

Meanwhile, Deutsche Bahn is continuing negotiations to replace the axles on its fleet of tilting ICE-T trains, which were discovered to be faulty in October 2008. In this case, however, the company has to deal with French manufacturer Alstom.

"The negotiations with Alstom are proving to be much more difficult than they were with Bombardier," a Deutsche Bahn manager said. Until further progress can be made, the tilting technology on the ICE-T fleet will be deactivated.

According to Die Welt, Siemens and Bombardier agreed to shoulder some of the cost of the axle replacement as they stand to gain from future lucrative contracts with Deutsche Bahn. This year, the railway operator is expected to announce its partners in the IC-X contract, which foresees a total modernization of its IC (Inter-City) train fleet.

In another damaging blow to the credibility of German rail operator Deutsche Bahn, the company has admitted that it had secretly and illegally monitored the health records of some of its employees. (05.08.2009)

Ruediger Grube - whose experience includes Daimler and EADS - set to take over Germany's rail company, Deutsche Bahn. His first task will be to get beyond the company's ongoing spying scandal. (03.04.2009)

Agreement was reached late Saturday in negotiations over pay and other issues for 142,000 employees of Deutsche Bahn, according Norbert Hansen, a top personnel official at German rail. (01.02.2009)