North Korea likely has the technical ability to create and detonate a hydrogen bomb. But whether or not the country has just done so is something the general public will not find out any time soon. 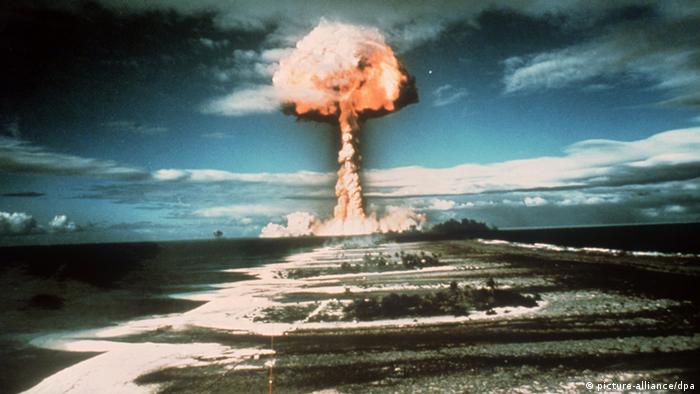 Detonating a thermonuclear bomb, known colloquially as a hydrogen bomb, is a two-step process.

First, inside the bomb, a traditional atomic explosion occurs. This involves shooting a slug of highly enriched uranium or plutonium into a larger lump of the same substance, setting off an atom-splitting chain reaction and a powerful nuclear explosion.

That primary explosion, when placed inside a thermonuclear bomb a short distance away from hydrogen isotopes, generates enough heat and pressure to start phase two: Nuclear fusion.

"This two-stage thermonuclear weapon has explosive yields far greater than can be achieved with fission weapons," says Tariq Rauf, the director of the disarmament, arms control and non-proliferation program at the Stockholm International Peace Research Institute (SIPRI).

"Thermonuclear fusion stages can be ignited in sequence to deliver any desired yield."

Fusion involves merging two atoms into one, in this case the hydrogen isotopes deuterium and tritium.

Inside a thermonuclear device, the fusion reaction releases large quantities of neutrons and helium atoms, ultimately generating up to 1,500 times the energy of a traditional, fission-based atomic weapon. 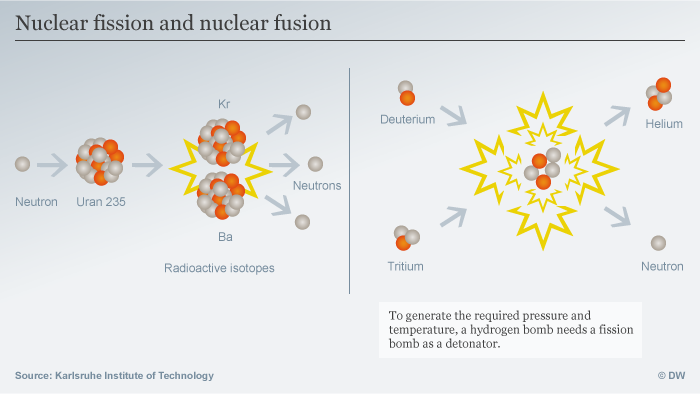 But thermonuclear detonations don't necessarily have to be that big.

Rauf says these weapons "can be smaller and lighter than fission weapons, but technologically more complex."

So was it a thermonuclear device in North Korea? "Well, we won't know for some time," Rauf says.

Though monitoring sensors throughout the world will soon be able to tell us whether there are noble gases such as xenon in the air, as well as a few other fission products, this will only tell us that a traditional, fission-based nuclear device has exploded. That could mean that it was the primary charge for a small hydrogen bomb. Or it could mean it was a traditional atomic bomb.

"The US has a WC135 'sniffer' plane for this purpose, as well as China, Russia and Japan," Rauf says, adding that North Korea has thus far ineffectively attempted to hide its underground tests by creating a series of up to nine consecutive "J-shaped" tunnels, one after the other, so that as little of the test materials enter the environment and atmosphere as possible.

Whether the US or other countries have the ability to sniff out thermonuclear explosions is not known.

But Rauf cautions against assuming North Korea's statements are propaganda.

Though Western sources are currently voicing skepticism about the country's nuclear weapon capabilities, they did so as well in 2006, 2009 and 2013, he points out - only to grudgingly acknowledge later that the DPRK indeed had carried out nuclear tests.

And as the former head of the verification and security policy for North Korea and other countries at the International Atomic Energy Agency, Rauf says the country is in fact capable of obtaining the components for a thermonuclear device - and that inspectors have always been impressed with the technical expertise of the North Korean nuclear technicians.

"It's a big mistake," he says, "to underestimate the DPRK’s nuclear weapons program."

The UN Security Council is reportedly planning an emergency meeting after North Korea said it had tested a nuclear bomb. Pyongyang's claim that the device was a hydrogen bomb has, however, been met with skepticism. (06.01.2016)