Lingering colonial legacies: The study of skin is too white | Science | In-depth reporting on science and technology | DW | 15.02.2022

Lingering colonial legacies: The study of skin is too white

The historical lack of racial representation in dermatology textbooks isn't just a problem in countries with majority white populations, but across the globe. 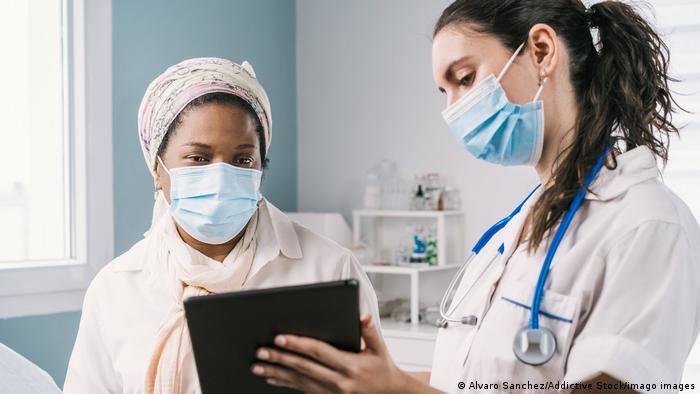 Just 3% of working dermatologists in the US are people of color, studies show

When Seye Abimbola was training to become a doctor in Nigeria in the early 2000s, all the images in his textbooks featured white skin.

Most of his textbooks came from the US or the UK, where Caucasian medical illustrations are the norm.

When it came to dermatology, Abimbola couldn't translate what he saw on the page to his reality. Nearly the entire population of Nigeria is Black, he and his classmates were Black, and his teachers were Black.

"I went and bought an Indian textbook, because I just couldn't transfer in my head what a lesion looked like in white skin [to] what it looked like in black skin…there was just no reference point," Abimbola told DW.

"But it was easier with the Indian textbook. I didn't think much of it at the time," he added.

Dermatologists in South Africa and Uganda reported similar experiences during their studies.

When South African dermatologist Ncoza Dlova was completing her training, nearly all the images in her textbooks featured white skin, she said. Dlova finished her training in the late 1990s, shortly after apartheid ended in South Africa, becoming one of the country's first black dermatologists.

"That was difficult for us to comprehend because… most of our patients are Black," she said.

"Someone with psoriasis would be described as having a salmon-colored skin patch, and we would wonder: 'How does that look?' As it did not fit what we were seeing in our Black patients," said Dlova.

Conditions that were very common in Black skin, like keloid scars and albinism, were not given enough attention, she said, and when they were featured in coursebooks, the content was brief and inadequate for diagnosis.

South African dermatologist Cebi Sibisi's university experience was similar. Around 95% of the images she encountered in her courses featured white skin, she said.

"Skin of color suffers a lot from hyperpigmentation issues — facial lichen planopilaris, dark inner thighs, dark elbows — which are day-to-day issues that we see in our clinics and don't know how to deal with because these were never dealt with [at university]," Sibisi told DW.

A German study published in late September 2021 evaluated over 5,300 images from 17 dermatology textbooks recently published by German doctors using the Fitzpatrick framework, which classifies skin color. They discovered that  91% of the images featured white skin, around 6% featured medium/olive-colored skin and less than 3% featured brown skin. The darkest shade, Type 6, was only featured in one image.
A  US textbook analysis published in 2021 had similar findings: Just 14% of the images featured dark skin.

While Dlova rarely saw images of Black skin in her textbooks, she said it wasn't uncommon to come across them when studying sexually transmitted diseases, which often manifest first in the skin.

Black people were exploited in early US research on syphilis, one of the most common sexually transmitted diseases. In the 1930s, doctors from the US government's Public Health Service enrolled hundreds of Black men in the now-infamous  Tuskegee Study to track the progression of the disease. When the experiment started, it had no known treatment.

Over the next 15 years, medical researchers discovered penicillin could be used as a treatment for syphilis but did not offer it to the men — the doctors wanted to watch the disease follow its course until the end of their lives.

By the time a reporter made the experiment public in the early 1970s, more than two dozen men had died preventable deaths from syphilis, and many others had passed it on to their children and families.

The impact of knowledge systems

While the Tuskegee Study was being facilitated in the US in the late 1940s, the first medical school was founded in Nigeria by the British, said Abimbola, a health systems researcher and senior lecturer at the University of Sydney's School of Public Health in Australia.

"It was during colonial rule. The founders were very explicit about what the curriculum was meant to be like. And what they wanted were doctors who could practice in the UK," Abimbola told DW.

This meant that doctors were trained to treat diseases and ailments specific to the UK, rather than Nigeria.

This logic played a key role in how Nigerian medical school programs were run, even after the country gained independence in 1960, Abimbola said.

Abimbola is the appointed editor-in-chief of BMJ Global Health, which is part of the British Medical Journal. It aims to cover global health issues that often go unacknowledged in journals that focus on one region.

"The job of a local journal is to service local people. So some of the problem arises when we expect, for some reason, the British Medical Journal to serve the needs of people in Lagos, or Accra," Abimbola said.

While visiting a European dermatologist, Dlova saw first hand the lack of experience with skin conditions common in Africa.

The dermatologist had a patient from Congo, and the staff wanted to do a biopsy to determine a diagnosis.

Dlova recognized it immediately — sarcoidosis, a serious disease that can cause a rash with red or purple bumps, skin lesions, discoloration, and growths under the skin.

"I just said to them, this is sarcoidosis. You don't have to do a biopsy."

Medical journals need to invite experts from Africa to write about these skin conditions, said Dlova.

"[They should] not get someone who's not familiar with the conditions — let's say an American or European dermatologist — they must get Africans who know these conditions, who have studied them," she said.

Things have slowly started changing since Dlova, Abimbola and Sibisi were in medical school.

Dlova published the book Dermatology: A Comprehensive Handbook for Africa in 2017, and she was part of an international team that in 2019 discovered a gene that helps explain why many Black women experience hair loss.

In December 2021, Nigerian medical student Chidiebere Ibe's drawing of a Black baby in a mother's womb went viral. People from across the world responded to the image saying it was they'd seen their skin color represented in a medical illustration.

Last month, Ibe announced plans to illustrate a new online dermatology textbook Mind the Gap, which launched in the UK in 2020.

It's one of the first online resources dedicated solely to depicting how skin conditions present in Black skin.

France is returning artworks acquired in colonial times to Benin. Germany is also open to restitutions. How are other European countries addressing the issue?

Is black not beautiful? Rwanda cracks down on skin bleaching products

Millions struggle with tropical diseases causing blindness and other disabilities. DW talks to expert Martin Kollmann about getting vital drugs to the communities that need them the most - amid war, famine and unrest.

The costly price of beauty