The Democratic Party has voted against an amendment to its platform that would oppose the Trans-Pacific Partnership (TPP) trade agreement. The discursive move is a nod toward one of President Obama's projects. 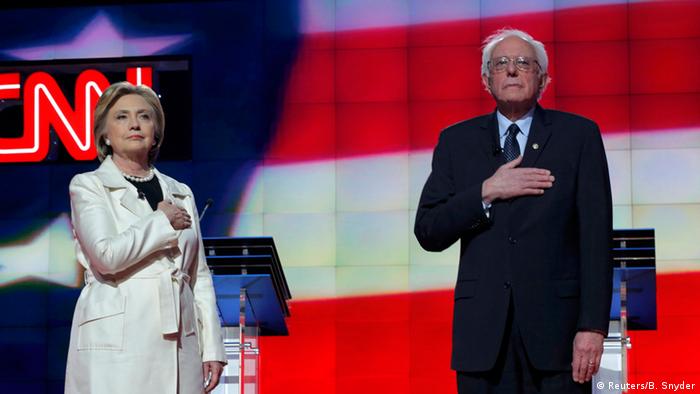 The initial proposal - made by Rep. Keith Ellison, D-Minn. - to oppose the controversial trade deal was rejected by members of the Democratic National Convention's drafting committee, which is briefed with coming up with the party's platform for the Philadelphia convention in July. It backed a measure that said "there are a diversity of views in the party" on the TPP.

It also reaffirmed that Democrats want any trade deal "to protect workers and the environment."

The original text for the party's program had rejected the Pacific Rim trade pact, which has also been opposed by presidential candidates Hillary Clinton (above L) and Bernie Sanders (above R).

Both Clinton's and Sanders' aides reportedly went through the 15,000-word draft of the platform line by line after long hours of policy discussions between the two campaigns and the Democratic National Committee.

"This platform is an aspirational document that speaks to what the Democratic Party stands for," the panel's chairman, Rep. Elijah Cummings of Maryland, said.

TPP in the balance?

The TPP is a trade agreement among 12 Pacific Rim countries signed in February, with measures to lower trade barriers, such as tariffs, and establish an investor-state dispute settlement mechanism.

The Obama administration considers the TPP to be a companion agreement to the proposed Transatlantic Trade and Investment Partnership (TTIP), a broadly similar agreement between the US and the EU.

The issue plays into themes related to managing the domestic effects of globalization, US competitiveness and notions of what the state can and should do.

These cut across party lines, although the left - epitomized most clearly by Sanders, but also pulling Clinton leftward with him - tends to see free trade as a means of undercutting collective bargaining and workers' rights.

Clinton - for long a free-trade supporter - is looking to encourage Sanders' supporters to vote for her in November. On the other hand, neither the party nor the party's candidates want to be seen as undermining Obama's legacy.

Obama has promoted the TPP despite opposition from rank-and-file Democrats, and members of the panel said it would be wrong to undercut the outgoing president in the platform.

"What I don't want to do is leave this place disregarding the position of the president of the United States," said Rep. Luis Gutierrez, D-Ill., a Clinton supporter who noted his opposition to trade deals.

A nod to the left?

However, not all on the left are happy with the textual tweakings, perhaps a harbinger of conflict to come within the party.

Dr. Cornel West, a civil rights leader and Sanders supporter, for example, said it was important for the party to take a stand against the trade deal. "Our beloved president is on a different side from you and I. We can agree with him on some things and disagree with him on others. I think he's wrong on this issue," West said.

The panel approved language calling for the abolition of the death penalty, calling it "a cruel and unusual form of punishment which has no place" in the nation.

The platform also called for the expansion of Social Security. It reportedly said Americans should earn at least a $15 (13.2 euros) an hour, referring to the current minimum wage of $7.25 an hour as a "starvation wage," a phrase the Vermont senator - who this week said he would vote for Clinton, without endorsing her - often uses.

The committee also said the convention text would include passages that support a "variety of ways to prevent banks from gambling with taxpayers' bank deposits, including an updated and modernized version of Glass-Steagall."

Sanders supports reinstating the Depression-era Glass-Steagall Act that prohibited commercial banks from engaging in investment banking activities. Clinton has not been a supporter of reinstating the law. So far.

US Presidential hopeful Bernie Sanders has said a Donald Trump presidency would be a 'disaster' for the country. But the senator from Vermont stopped short of endorsing his Democratic rival. (24.06.2016)

The Democrats are starting to unite and it is only a matter of time until Bernie Sanders throws in the towel. Expect Hillary Clinton to move to the left to pick up Bernie's supporters, says DW's Miodrag Soric. (10.06.2016)