The House Judiciary Committee says the report reveals the "culture of lying" at the White House. The committee wants to see the uncensored report before Attorney General Barr testifies before Congress. 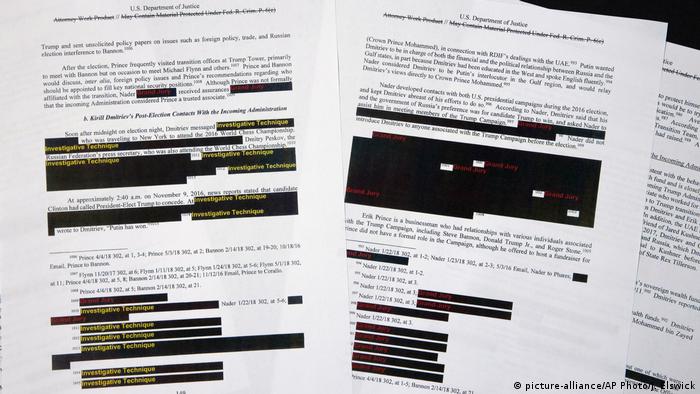 Democrats in the US House of Representatives issued a subpoena on Saturday, demanding they be given access to an unredacted version of the Mueller report. The Department of Justice called the move "unnecessary."

Speaking with broadcaster ABC, the House Judiciary Committee chairman, Jerry Nadler, argued that the report proves there is "a culture of lying at the White House," and that his committee had the right to know the full contents of the document.

The 488-page report states that the two-year investigation could not find any direct conspiracy between Russian agents and the Trump campaign. However, it found that Trump's camp had welcomed attempts by Russia to destabilize the public discourse in the US ahead of the 2016 election.

Special Counsel Robert Mueller's report also states that it could not definitively say whether or not President Donald Trump had obstructed justice since taking office.

This latter finding particularly irked Democrats after they were told previously by Attorney General William Barr that the report  did not contain convincing evidence of collusion by the president or his team.

Sanders: Lies were 'slip of the tongue'

She said that her incorrect statement that "countless" FBI agents told her they had lost confidence in former agency chief James Comey was a "slip of the tongue" made "in the heat of the moment."

The subpoena gives a deadline of May 1 for the full report to be handed over to the Judiciary Committee, one day before Attorney General Barr is due to testify before Congress.

If the Justice Department refuses to cooperate, officials could be held in contempt of Congress.

Senior House Democrat: Mueller report the beginning, not the end

Representative Jerrold Nadler has called the report a roadmap for further congressional investigations. He also accused Attorney General William Barr of undermining the Department of Justice to protect the president. (18.04.2019)