Democracy gets off to peaceful start in Egypt | World| Breaking news and perspectives from around the globe | DW | 29.11.2011

Democracy gets off to peaceful start in Egypt

Despite worries of violence, the first election in Egypt since the fall of strongman Hosni Mubarak has so far gone smoothly and has seen a large turnout. 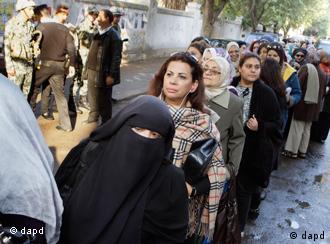 A week ago it appeared unthinkable that the parliamentary elections in Egypt on Monday and Tuesday would even take place. Demonstrations quickly turned into bloody clashes with security forces and dozens were killed or injured.

By Tuesday evening, polling stations had closed amid general satisfaction that voting had been peaceful and fair. "The people have passed the democracy test," read one headline from the independent daily newspaper Al-Shorouk, as voting came to an end.

UN Secretary General Ban Ki-moon praised the "generally calm and orderly" election process. A spokesman for the UN leader said that he congratulated the Egyptian people "for their contribution to the overall democratic transformation in North Africa and the Middle East." 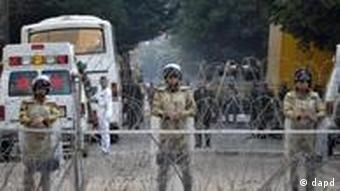 Egyptian soldiers were out but not violent

The hope of free and fair elections - without security troops and fraudulent votes - mobilized more voters than ever before. The numbers of people trying to cast their ballot meant that polling stations had to stay open two hours longer than planned on Monday. Following the bloody clashes of the past days, thousands of soldiers were present, but peace prevailed at Cairo's Tahrir Square and at other opposition gathering-places in the capital.

The head of the ruling military council, Hussein Tantawi, was shown on state TV at several polling stations receiving information on how the vote took place. Bloggers were at work reporting during the entire day, with some speaking of individual scenes of violence and attempts to influence voters before they cast their ballot.

For Thomas Demmelhuber, Egypt expert at the University of Erlangen-Nuremberg, despite the individual scenes of violence, the election is enormously important, because it "serves as a political vent for pressure that has been building up for over nine months."

The most likely victor is the "Democratic Alliance," an umbrella constellation that comprises eleven parties. The leading voice here is that of the Freedom and Justice Party, the political arm of the Islamist Muslim Brotherhood. In order to distinguish itself from other, more radical parties from the Islamist spectrum, the Muslim Brotherhood has tried to get over to the media a democratic and pluralist position. According to Mohamed Saad Katatni, the secretary general of the Muslim Brotherhood, there are a number of Christian candidates on its election list.

Katatni dismissed fears of Christians that they will be repressed if the Muslim Brotherhood takes power. In an interview with Al Jazeera, the Doha-based Arab broadcaster, Katatni blamed the atmosphere of distrust and hatred between Muslims and Christians on the "old regime" of deposed leader Hosni Mubarak.

It is difficult to gain an overview of the political landscape in Egypt. Apart from the Islamists, there is not only a Social Democratic Party, but also a Party for Equality and Development and an Awareness Party.

There is also the Egyptian Revolutionary Party, which advertises "revolution" on its election posters, but in actuality was founded by former members of Mubarak's national NDP party and serves to preserve the power of the elite rather than the popular revolution taking place on Tahrir Square.

Freedom is the other keyword that is being used by a range of parties. The names of the "Free Egyptians Party," the "Egyptian Freedom Party," or "Free Egypt Party" are almost identical. And many of the new parties which signed up for the election are so underfunded that they will have to struggle to survive the coming year, said political analyst Emad Gad of the Al Ahram Center for Political and Strategic Studies in Cairo.

If any of these new "freedom" parties survives, it will most certainly be the "Free Egyptians Party." The figurehead of the party, founded in April, is the Coptic businessman Naguib Sawiris - who sees his party as the antipode of the "Freedom and Justice Party" of the Muslim Brotherhood.

Sawiris' party, with 130,000 members, is seen by observers as financially sound and well organized, and champions itself as the advocate of Western democratic ideals such as human rights and the equality of all Egyptians.

Over half of Egypt's 85 million people have been called to elect the 498 representatives in Egypt's parliament. The vote will take place in three stages: the residents of Cairo, Alexandria and seven other administrative districts can cast their ballots until Tuesday. Immediately thereafter the results of the direct candidates will be published. 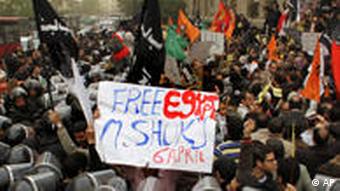 The 2010 Egyptian election was plagued by protests

In December and January two further stages will be held in which the residents of Egypt's 18 other provinces will cast their votes. In each stage there is the possibility of a runoff, if no candidate receives an absolute majority. Two-thirds of the seats are reserved for party lists, and the final results of the entire election are expected in mid January.

For Thomas Demmelhuber, this election system lacks transparency - and brings back the unpleasant memories of the manipulated vote in 2005.

"The Muslim Brotherhood won 88 seats - the majority in the first round of voting. In the remaining rounds, Mubarak's helpers made sure that the Islamists no longer played a role."

In 2010, parliamentary elections were held on one single day - so as to comply with changes to the country's constitution made in 2007. This vote, too, was manipulated and widely condemned as fraudulent.

Nevertheless, the fact that the ruling military council has returned to the earlier election system has worried many observers, who fear that it will not help on Egypt's road to democracy.

For most Egyptians, the parliamentary elections are the first truly democratic polls in their lives. For decades, results had been manipulated. Now, there's hope for a change, says DW's Bettina Marx. (29.11.2011)

Egypt faces major challenges as historic election gets under way

For the first time since the ouster of former leader Hosni Mubarak, Egyptians are casting their ballots for a new parliament. The outcome of the election will decide the future of Egypt's fragile, nascent democracy. (28.11.2011)

Egypt's ruling military council has agreed to form a new government that will prepare a presidential election to be held before next July. But the concessions were swiftly rejected by protesters in central Cairo. (23.11.2011)