Decision due on controversial Irish fish farm | Environment| All topics from climate change to conservation | DW | 26.03.2013

The Irish government is proposing one of the largest salmon farms in the world. Activists and locals are raising environmental concerns though, including the possibility the farm will make other local fish turn pink. 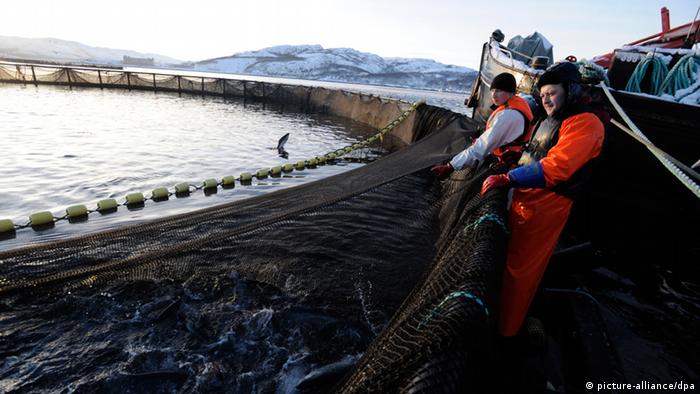 For over 3,000 years people have followed fish and game to the small, rocky island of Inis Oirr. Fishers, farmers, pirates and pilgrims have all migrated to the three square kilometer island at various times of strife on the Irish mainland.

Now, with the country's economy still sputtering in recession, it's the Irish government that is looking towards Inis Oirr to help spur job growth on the west coast of the country. Bord Iascaigh Mhara (BIM) is the government agency that oversees the seafood industry, including environmental protection. BIM chief executive Jason Whooley has described the country's new fish farm project to the Irish Times as "extremely significant" to improving the economy.

The plan is to raise 15,000 tons of organically raised salmon about 1.5 kilometers off the coast of Inis Oirr. The roughly 3.6 million salmon are projected to generate some 100 million euros ($128.74 million) in exports. Demand for organic salmon in the European Union and the United States is high and prices are at a premium.

The government would own the farm and lease it out to a private company. BIM hasn't disclosed what company would run the salmon farm. A decision on whether the planned fish farm will go ahead at all is expected shortly from the Irish government. 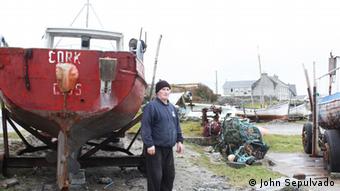 Many of the 270 people that live on Inis Oirr see the salmon farm not as a potential economic driver, but rather as a possible environmental nightmare that could fatally harm the island's tourism sector. During the summer, the island's population swells to about a thousand as people come to the island to enjoy the temperate weather and scenic beaches.

60-year-old Padraic Mailer has lived on Inis Oirr his entire life. He's concerned waste from the salmon farm will pollute the island's beaches. Several studies have shown waste from farms can travel long distances and wash ashore, polluting the land.

"I know people that are friends of mine, and they say they're not going to come here, if there's a fish farm there, because of the bad name it has," Mailer says.

Part of the location's appeal is that expensive filtering equipment isn't needed, as it would be if the farm was located in shallower water or on land. During public meetings on the island, Mailer says the government assured residents the farm would be far enough away for waste to dilute.

"It's only a mile off there, and I reckon that's an insult to us, saying that's offshore. It might be offshore from Dublin or Brussels, but it's definitely not too far from us," Mailer says.

Inis Oirr is part of the Aran chain of islands that sit at the mouth of Galway Bay. They are often imagined in the public mind as a simple place trapped in the past where men still ride donkeys to the docks and families speak Irish around the dinner table. Yet, while the islands are an ingrained part of the national identity, and other proposed developments on the islands have been widely unpopular, the point against the salmon farms that have galvanized the public has been the prospect of pink fish. 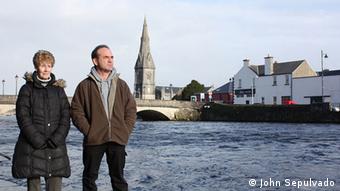 Josephine Egan, along with her son Christopher, believes fish farms would damage the environment

"If the salmon farm is open, it is very possible those fish could become pink," Egan told DW.

Farmed salmon are often naturally white in color, as they consume fish food instead of eating smaller fish. In order to produce the pink color so desired by consumers, farmed salmon are often fed colored pellets, explains Roz Naylor, the Director of Stanford University's Center on Food Security and the Environment in the US.

"For example, if a producer is really hoping to have a dynamo red salmon, the feed manufacturer will actually put that die into the feed and that's the big pigmentation the farmed salmon will have," Naylor says.

Because the farm will be so large, Christopher Egan says other white fish will migrate towards the free food available at the salmon farm.

Although public opinion appears to be turning against the salmon farm, Stanford's University Roz Naylor says fish farms and other aquaculture ventures will supply most of the future demand for seafood. 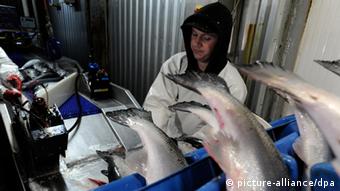 Currently, about half of all seafood consumed by people are raised through aquaculture.

Naylor sees Ireland's willingness to utilize the country's vast ocean resources as a good step forward for the economy.

However, she would like to see the country start with a smaller farm that would be easier to control and maintain. If a large environmental problem is caused by this massive farm, it could further erode public support and halt future aquaculture developments.

"The world will be watching, especially the environmental community, and any mistakes are going to be magnified," Naylor adds.

Currently, the total area of all Ireland's fish farms are the size of a soccer field, according to the Irish Farming Association (IFA). The expectation is that if the proposed farm is successful, the government will approve others to be owned by private enterprises.

Richie Flynn heads the IFA's aquaculture lobbying arm. He is is calling on the government to put in "fair and transparent" regulations to govern aquaculture projects to boost public confidence in the operations. 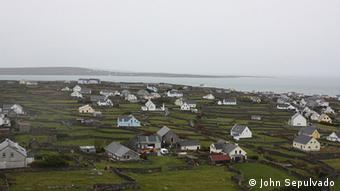 Inis Oirr, the smallest of the Aran Islands, is located at the mouth of Galway Bay

Flynn points out that conventional agriculture has about a five thousand year head start on fish farms, and there has to be operations to develop best practices. Yet, the concern for many Inis Oirr residents is that development will come at their expense.

"It would not take much now to scare the tourists off," Inis Oirr resident Padraic Mailer says. "Pollution or pink fish? That would do it."

Vibrio bacteria are usually found in warm waters, but new research has found them in the cold Baltic Sea as a result of rising temperatures. Controlling the spread will be hard. (25.07.2012)

Tuna made Hagen Stehr a multi-millionaire. But its plight forced him to conclude that the industry needed to change. The first to breed bluefin tuna in captivity, Stehr's breakthrough may save the species in the wild. (04.05.2012)