Death by fire: Self-immolation in the Arab World | World | Breaking news and perspectives from around the globe | DW | 09.03.2011

Death by fire: Self-immolation in the Arab World

As the political upheaval that began in Tunisia spreads from Egypt to Libya, dozens of people across the Arab world have publicly set themselves on fire. Are these self-immolations acts of despair or political protest? 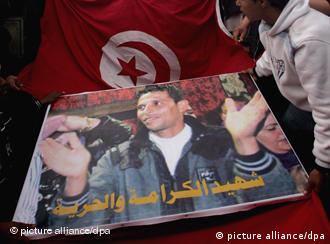 Last December, a young unemployed street vendor named Mohamed Bouazizi doused himself in paint thinner and set himself on fire outside of the municipal building in the remote Tunisian town Sidi Bouzid. He died of his self-inflicted wounds weeks later.

As revolutionary fervor engulfs the Arab world, dozens of people from Morocco to Yemen have lit themselves on fire in front of municipal buildings, parliaments, and presidential palaces. Are these gruesome suicides acts of personal desperation triggered by hopeless social conditions, or are they a form of political protest designed to expose societal injustice and incite popular uprisings?

Life not worth living

Werner Ruf - an expert on North Africa with the University of Kassel in Germany - told Deutsche Welle that although Bouazizi's suicide focused international attention on self-immolation, the practice had become increasingly common in Tunisia prior to his death. According to Ruf, up to 15 percent of the patients in the special clinic for burn victims in Tunis are victims of self immolation.

"The fundamental problem is that there's no way to live with human dignity there," Ruf said. "Consider that every day hundreds of people drown trying to cross from Algeria, Tunisia and Morocco on one side to Spain on the other. These kids know how dangerous that is, that they have a 5 percent chance of surviving the journey."

"But their lives are no longer worth anything to them," Ruf continued. "Either I get out, or I die. Whether I drown in the ocean or die at home doesn't matter. With this kind of despair, self-immolation is just one more way to end an undignified life without prospects for the future."

In Bouazizi's case, the 26-year-old street vendor set himself on fire after a run in with the authorities. A police officer tried to confiscate Bouazizi's produce cart because he lacked the appropriate permit. When Bouazizi refused to cooperate, the officer slapped him. Ruf believes that Bouazizi's public humiliation at the hands of the state pushed him and the Tunisian people over the edge.

Bouazizi's quickly became a martyr to the political opposition. Protesters rallied around him as a symbol of the need for change as they took to the streets. Public pressure even forced then President Ben Ali to visit Bouazizi at his hospital bedside. Ultimately, the pressure became so great that Ben Ali fled the country.

Although Bouazizi's suicide became an important symbol, Adam Lankford of the University of Alabama does not believe the street vendor had a political motivation. Lankford, who began to examine self-immolation after investigating the psychology suicide bombers, told Deutsche Welle that activists later interpreted Bouazizi's suicide as an act of protest.

"In these kinds of tumultuous times people want heroes," said Lankford, a professor of criminology. "Frankly, they would prefer to see Bouazizi as a hero, as someone who is willing to sacrifice himself for the greater good rather than the reality which may be that he was a tragic victim."

But Michael Biggs, sociology professor at the University of Oxford, believes that Bouazizi thought about more than his own despair. Biggs, who studies self-immolation as an act of protest, says Bouazizi at least implicitly sent a political message when he lit himself on fire in front of the town municipal building.

"Talk is cheap," Biggs said. "There are lots of protests and causes out there, people saying that things are unjust. But if you're willing to die that gives you a very credible signal that this isn't just talk about injustice but that this is something that I think is so terrible that I'd rather die."

Since Bouazizi's suicide, dozens of people from Morocco to Yemen have lit themselves on fire in public places. These self-immolations usually occur in front of government buildings or other public places and are often carried out by financially strapped people who have been denied services by indifferent bureaucracies.

In Egypt, a restaurant owner lit himself on fire in front of the parliament building in Cairo after being denied subsidized bread. A lawyer did the same a day later to protest rising prices. An Algerian woman in a small town southwest of Algiers tried to set herself in flames in front of a municipal building after being denied housing aid. And in the West African country of Mauritania, a man tried to light himself on fire in front of the Senate and presidential buildings in protest against poor governance.

These incidents - and many others - all happened within days of each other in January as the political unrest, which began in Tunisia, began to spread across North Africa. Sociology professor Biggs attributes the spate of self-immolations to Bouazizi's suicide in December and the subsequent successful revolution in Tunisia.

"One single person's action can make a huge difference," Biggs said. "If we could go back and stop Bouazizi from killing himself then I'm sure there would have been no subsequent suicides or self-immolations in North Africa."

"It was precisely because his action was spectacular and spectacularly successful. It seemed to bring about a train of events that led to the overthrow of the regime."

According to Bigg's, the practice of self-immolation has traditionally been uncommon in the Muslim world. Islam has a strong prohibition against suicide and desecrating the human body, both of which occur during self-immolation. Yet Muslims continue to set themselves onn fire. As recent as late February, the Algerian newspaper El-Watan reported that a 25-year-old man burnt himself to death in a town east of Algiers to protest problems with his identity card. 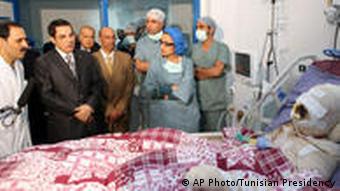 "These religious sanctions are being overruled by perhaps desperation or a belief that their political regime is intolerable," Biggs said. "And of course that will in some sense change the culture a little bit. Maybe it will become a more common form of tactic in the Middle East."

How can this spate of self-burnings, which contradict both religious and secular conventions, be explained? Lankford, the criminal justice professor, says that ultimately the answer is in the eye of the beholder.

"Really regardless of what the individual motivation is, it's fine for us to find them tragic, inspiring, or moving or anything else," Lankford said. "That's legitimate, regardless of the intention."

Arab world: 'The genie is out of the bottle'

Fortress Europe? The EU continues to battle for a united asylum policy

The European Union has being trying to harmonize its asylum and immigration policies for several years, and the situation in Lampedusa highlights the EU’s weaknesses and differences between member states. (16.02.2011)

'If young people don't get jobs, this is not going to go away'

The US strategy toward the Middle East was too heavily focused on terrorism and Islamism, argues a former US ambassador to Yemen. Instead, the emphasis should be on improving the economic conditions for young people. (03.03.2011)