Germany's interior minister has called for new anti-terror measures. Media report that some of Thomas de Maiziere's plans could take effect without the approval of the upper house of parliament. 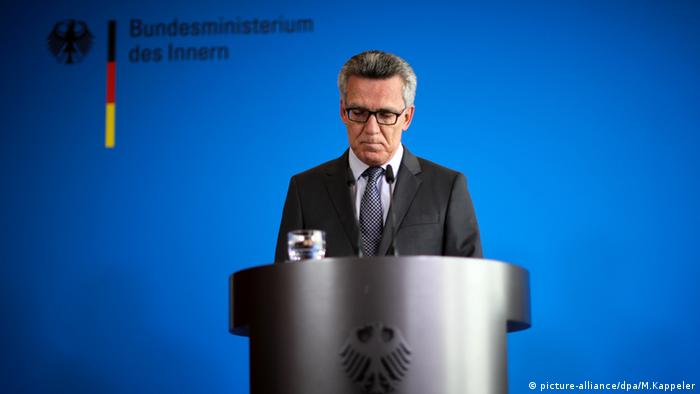 German newspapers report that Interior Minister Thomas de Maiziere intends to present new measures that he says will - and could take effect without the approval of the Bundesrat, the upper house of parliament. According to the Kölner Stadt-Anzeiger and the national broadsheet Bild, de Maiziere wants to speed up deportations of rejected asylum applicants and loosen privacy protections.

Maiziere plans to institute "threat to public safety" as a ground for deportation, Bild reported on Wednesday.

According to Bild, Maiziere also wants to work with the Health Ministry to water down patient confidentiality to allow doctors to report people whom they believe to be potential threats to public safety.

On Tuesday, newspapers reported that Maiziere and state interior ministers from the Christian Democrats (CDU) and Christian Social Union (CSU) were looking to introduce massive changes to the legal system. The ministers would also deploy up to 15,000 more police officers' by 2020 and arm them more heavily, as well as affix them with body cameras and increase video surveillance of public places and transit.

They would also introduce a ban on burqas, the full-body garments worn by some Muslim women, and an end to dual citizenship, which they consider "a great hindrance to integration." Germans with more than one nationality who are found to have fought for terror organizations would lose their citizenship.

"We reject these split loyalties," the ministers announced in a joint statement. "We suggest that those who want to engage in the politics of foreign governments leave Germany."

The plan also calls for harsh punishment for religious leaders of foreign extraction who make inflammatory statements: "We call for the prompt deportation of non-German hate preachers."

De Maiziere and his regional CDU-CSU counterparts will meet on August 18 in the nation's capital to sign the "Berlin Declaration," which they have put together via teleconferences. These changes, however, would require the approval of the Bundesrat.

For the first time ever, the Bundeswehr is preparing joint exercises with the police to face terrorist scenarios in Germany. But despite conservative pressure, this decision will not require a constitutional amendment. (29.07.2016)