David Miranda: "I was subject to psychological torture"

David Miranda, the partner of Guardian journalist Glenn Greenwald, was detained at London Heathrow Airport for nine hours. In an interview with DW, he raised serious allegations against the British authorities. 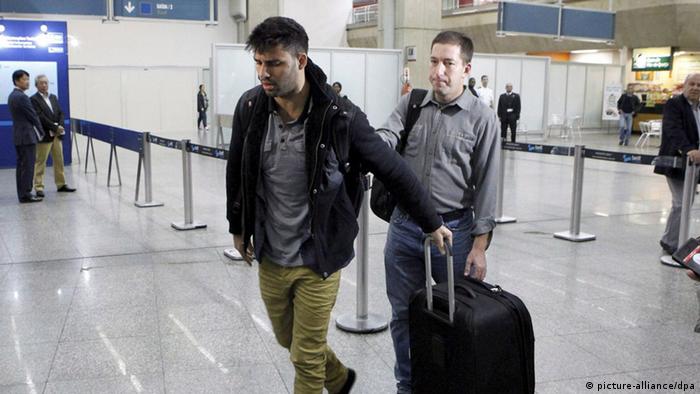 Miranda accused British security officials of abusing him during questioning. "I was subject to psychological torture," Miranda told Deutsche Welle. He said he was even threatened with a nine-year detention in Guantánamo.

In the interview, Miranda said: "They told me loud and clear: 'If the US or Great Britain arrests someone in connection with anti-terrorism laws, there are no limits for them. They can arrest people from any country, put them on a plane and send them to Guantánamo. And they'll stay there in detention for nine years without a trial, without anything.' That's why it's intimidating when they talk about the anti-terrorism laws. They threatened to arrest me if I refused to co-operate. That's what they kept emphasizing."

Asked whether the interrogation had shaken his belief in democracy, he said: "The US and Great Britain still think they can control us here in South America. It's some sort of imperialism. It was the same thing when Bolivian President Evo Morales was recently forced to land in Vienna. They treated me the same way when they detained me for eleven hours, nine inside a locked room, and two outside of it."

In reference to the planned legal action against Great Britain, Miranda told DW: "I have three demands. The court should make it clear that the anti-terrorism laws were wrongly applied. I also want my confiscated personal belongings back. What is most important to me, however, is that none of the data on my laptop, mobile phone and external hard drive is copied and passed on."

At the same time, he criticized the Brazilian government: "It was good that Minister of External Relations Antonio Patriota reacted immediately, but in my opinion, his response wasn't sufficient. Because there is a decisive difference between having a clear position and simply saying 'I don't want this to happen again.' I hope that my country's government adopts a position that prevents another Brazilian from being involved in such an incident."

The original interview in Portuguese

The interview in German