The German book publishers' association has awarded Israeli author and peace activist David Grossman one of Europe's most prestigious prizes in the arts, along with a 25,000-euro endowment. 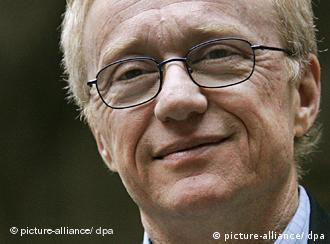 Grossman's work includes the novel 'To the End of the Land'

The prize's awarding committee gave high praises to Grossman, 56, calling him "one of Israel's foremost authors and an active supporter of reconciliation between Israelis and Palestinians."

"His books show that the spiral of violence, hatred and displacement in the Middle East can only be ended through listening, restraint and the power of the word," they said in a statement. "In his novels, essays and stories, Grossman has consistently sought to understand and describe not only his own position, but also the opinions of those who think differently."

Grossman's work includes the epic novel "To the End of the Land," telling the story of a woman's journey through Israel. He wrote it after his son was killed in the 2006 war between Israel and Hezbollah.

The prize includes an endowment of 25,000 euros ($30,000). He is to officially receive the prize at an awards ceremony on October 10 at the Frankfurt Book Fair.

Marcel Reich-Ranicki is Germany's best known literary critic. His long career and definitive pronouncements have earned him the irreverent nickname "the pope of German letters." On June 2, he turns 90. (02.06.2010)