Almost 20 million children worldwide missed their vaccinations in 2018, the report said. Misinformation led to many parents avoiding the vaccines as the "anti-vaxx" movement soured public perception. 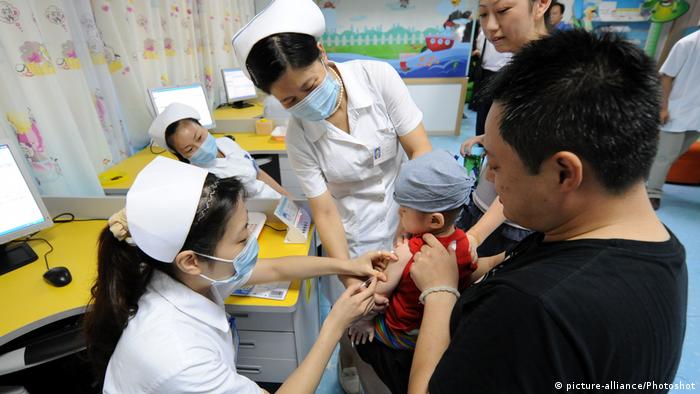 Nearly 20 million children were not vaccinated against life-threatening diseases in 2018, a new report has warned.

The annual report, by the World Health Organization (WHO) and UN health body UNICEF, said that the resurgence of measles has highlighted "dangerous" gaps in efforts to combat preventable illness.

The report said that 19.4 million children did not get fully vaccinated from preventable diseases, an increase of 700,000 on 2017. The UN agencies said there had been a "dangerous stagnation of global vaccination rates, due to conflict, inequality and complacency."

The report further warned that 2019 could present an even bigger crisis. Initial data suggested the number of measles cases had increased by 300 times since the first quarter of 2018.

Read more:Why measles is so deadly and vaccination so important

WHO director general Tedros Adhanom Ghebreyesus said "vaccines are one of our most important tools for preventing outbreaks and keeping the world safe."

"It's often those who are most at risk – the poorest, the most marginalized, those touched by conflict or forced from their homes - who are persistently missed," he added. "Far too many are left behind."

A previously almost eradicated illness, measles, has been sharply on the rise, the report detailed. Cases of the measles disease more than doubled since 2017, to 350,000. Cases had before fallen by 80% between 2000 and 2017.

The report also said other preventable diseases, like tetanus and diphtheria, had not been vaccinated against sufficiently.

Read more:Anti-vaxxer mentality is better tackled through empathy, not facts

WHO have partially blamed the "anti-vaxx” movement for the increase in diseases such as measles, senior figures at WHO have said. The movement alleged wrongly that vaccines were linked to an increase in conditions such as autism.

The director of WHO's vaccines department, Kate O'Brien, said in Geneva that the UN was "concerned about the proliferation of misinformation (and) outright false information," online.

The German Federal Center for Health Education said in April they worried about the effect misinformation was having on adults and children and their decisions to take vaccines or to miss it. The government plans to make a measles vaccination compulsory.

The report did also detail some positives. Polio, it said, has almost been eradicated across the world, with only Afghanistan, Nigeria and Pakistan seeing endemic levels of the disease.

US could lose measles elimination status over outbreaks

The United States has recorded its highest tally of measles cases in 27 years. If the US cannot control the outbreaks, it may lose its status of having eliminated measles. (31.05.2019)