Dacic: 'The results are what counts'

On July 23, Ivica Dacic is going to take office as Serbian prime minister. In an interview with DW he talks about the Serbian approach to Europe, his stance on Kosovo and why his political past is nothing to worry about. 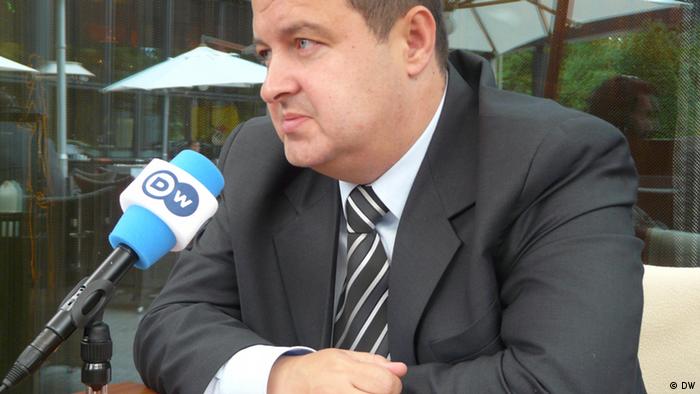 DW: Regarding your own political past and your former role as spokesperson for Slobodan Milosevic - have you experienced any criticism due to that in Europe?

Ivica Dacic: I survived politically, despite Milosevic's attempts to bully me out of the party. I was elected as chair of the leading committee of the party, even though Milosevic was against it. And even though Slobodan Milosevic's family supported the other candidates, I became the party leader. 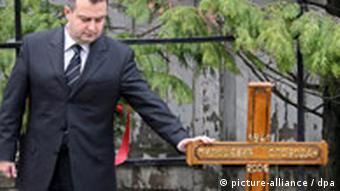 Ivica Dacic, touching a wooden cross at Milosevic's grave in 2007

So why should anyone talk about my political past? Policy making and the results are what count. If there is anyone who has something to say about that - well, by all means. But the Ministry of the Interior, under my leadership, was the most successful ministry of the Serbian government, according to our citizens. And that's the only thing that counts.

The Serbian government - under its ruling coalition between ex-nationalists and socialists - doesn't have a good reputation among other governments in Europe. How capable is it to lead Serbia into the European Union?

Believe me, nowadays President Nikolic is a far bigger euro-fanatic than many other politicians in Serbia; and that's what other European politicians are saying. Indeed, many foreign ambassadors in Serbia approach him to then complain about my governance. I believe Nikolic had positioned himself in the eyes of the international community rather well for a victory in the elections. Probably Boris Tadic [and his way of governing the country] has helped him with that. And that's why Tadic now really shouldn't complain.

What does Serbia have to do in order to get a date for accession talks by the end of the year?

Open questions only remain on the subject of Kosovo. There, we have to finish what we had promised last December. We have to implement our agreements, finalize talks on the new telecommunications law and on energy, and make it possible that EULEX and KFOR can operate throughout all of Kosovo. Besides, we should begin with the political dialogue; Serbian president Tomislav Nikolic said that from the Serbian side there's interest in pursuing this dialogue on the highest political level. We have to organize our situation regarding Pristina in a way that doesn't jeopardize our moves towards the EU, and in a way that Serbia isn't forced to recognize Kosovo and Metohija as an independent state.

I was always of the opinion that we shouldn't act against our own interest. There had been many situations where I, as deputy prime minister, had to leave an international conference, only because someone was present from the Kosovo administrational area, who had been introduced as an official representative of the Republic of Kosovo. 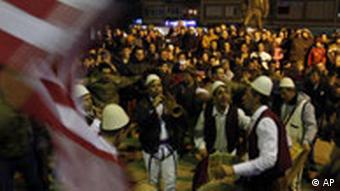 That, however, had been a practice of the [former] government, which was headed by the Democratic Party.

But some people's idea still prevails - that Kosovo should be divided?

Yes, for me that idea is still valid. But the question is: how pressing is that issue for the international community and the [Kosovo-] Albanians? So I suppose this is rather my own idea, for which I can't find the necessary Serbian support. And a separation of Kosovo is not as important as a normalization of the situation. We don't want any further quarrels, terror and attacks - we want normalization, peace and stability.

He was spokesman for the infamous Serbian President Slobodan Milosevic in the 1990s - now Ivica Dacic is back at political center stage - as the new prime minister in Belgrade. (30.06.2012)

An international group has declared Kosovo a sovereign state. The former Serbian province will soon run its own government, but peacekeepers will stay to diffuse tensions between ethnic Serbs and ethnic Albanians. (02.07.2012)

Serbia's newly-inaugurated president has said in an interview that the 1995 massacre at Srebrenica amounted to war crimes, but not genocide. (02.06.2012)

KFOR peacekeepers are "closely monitoring the situation" amid the worst tensions between Serbia and Kosovo in a decade, sparked by a row over car registration plates.