A major German opera house has pulled a contentious opera ahead of its second planned showing. The adaptation of Wagner's Tannhäuser featured graphic Nazi imagery and prompted public protests on opening night. 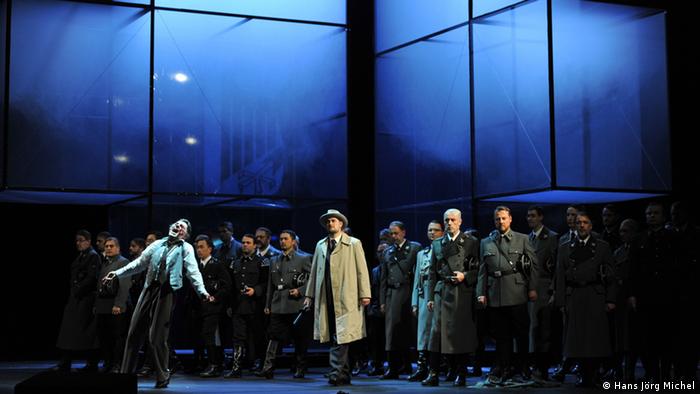 The Düsseldorf opera house announced that Thursday's second planned showing of its Tannhäuser opera would be performed only as a concert, with the on-stage dramatization cancelled after a profoundly critical reception on opening night.

Saying that they were aware of the dramatization's potential for "controversy," the Deutsche Oper am Rhein (German Opera on the Rhine) said it had underestimated the effect of the display.

"We react with the greatest of concern to the fact that some scenes, especially the very realistic depiction of execution at gun point, led to such a strong physical and psychological impact on numerous visitors, that they had to seek medical attention afterwards," the opera house said in its statement published on Wednesday evening. Another contentious scene appeared to depict execution in gas chambers.

"In an intensive discussion with the director Burkhard C. Kosminski we talked about the possibility of changing some individual scenes," the opera house said. "He refused to this on artistic grounds. Obviously we are legally obliged to respect the artistic freedom of the director."

The scandal surrounding Russian singer Evgeny Nikitin's reputed swastika tattoo and the ensuing cancellation of his Bayreuth Festival contract shows how touchy the subject of Bayreuth's relationship to Nazi ideology is. (24.07.2012)

As a result, the show would continue only as a concert, with people welcome to exchange their tickets if they were no longer interested in the Tannhäuser performance.

'The most turbulent evening I have experienced'

There had been no official call to cancel the show, although the local "Rheinische Post" spoke of a "Nazi scandal" on its front page after the Saturday premiere. The director of Düsseldorf's Jewish Community Michael Szentei-Heiser called the dramatization "tasteless," but said he would not ask for the show to be stopped. Although Wagner was an "ardent anti-Semite," Szentei-Heiser said he had nothing to do with the Holocaust. Wagner's music was adopted and used by the Adolf Hitler and his Nazi party, 50 years after the musician's death.

"All these very different people - young and old - were visible in glass chambers, behind glass walls; suddenly smoke, steam, fog streamed in, and they were all lying on the ground. The image of the gas chambers was certainly very strongly present, and you noticed immediately how the tension mounted in the room, how the people found this image very trying," the opera critic explained.

The summary execution of a family by the protagonist Tannhäuser, who wore a Swastika armband, appeared a depiction of the killing of Jewish deportees, Gondorf said: "At that point, for the first time, the whole evening was really on the brink."

This scene was set without any music, and Gondorf noted this unusual attempt to stop the audible element of an opera betrayed the fact that Kosminski, Mannheim's theater director, had never dramatized an opera before.

"I believe this, at the latest, should have served as a clear indication of a beginner at work," Gondorf said on WDR3.