Cup of Nations kicks off in South Africa

The 2013 Africa Cup of Nations soccer tournament has kicked off in Johannesburg. Host South Africa drew 0-0 in an error-strewn opening match against the debutant Cape Verde Islands in persistent rain. 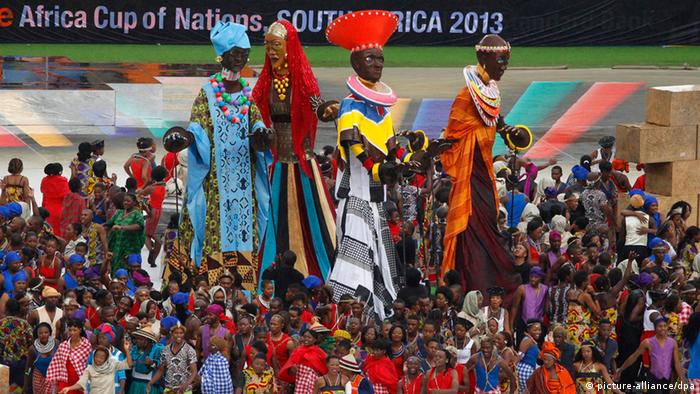 The 29th Africa Cup of Nations opened in South Africa's First National Bank Stadium on Saturday, with traditional dancers taking to the pitch in a rainbow-colored ceremony amid rainy weather.

Hundreds of children grabbed colorful balls and threw them on the pitch to form a giant South African flag, with fans blaring vuvuzelas in excitement.

South Africa was held to a 0-0 draw by newcomers Cape Verde in the tournament's first match before a sellout mostly home crowd of 90,000.

Cape Verde earns one point for its defiant first game at a major tournament and almost scored a goal at the 13-minute mark.

South Africa, which on Saturday seemed lackluster, last won the African Cup in 1996.

Over the coming month, 16 teams - 10 of them former champions - will compete for Africa's continental crown.

South Africa stepped in to host the tournament just a year ago, after the Confederation of African Football (CAF) decided to move the competition from Libya, which is still gripped by instability in the aftermath of the 2011 overthrow of dictator Moammar Gadhafi.

"I think South Africa as hosts have done an amazing job considering the time they had to prepare for this tournament after it was moved from Libya," said Hicham El Amrani, secretary general of African soccer's ruling body.

South African soccer has been marred by allegations of corruption, though. Just months before the 2013 Africa Cup, a FIFA investigation uncovered a match-fixing scandal dating back to the run-up to the 2010 World Cup. South African Football Association officials allegedly colluded to fix four matches, among them two friendlies in which South Africa played against Guatemala and Colombia.

The investigation into the allegations has been postponed until the Africa Cup finishes on February 10.

Starting this Saturday, 16 nations meet in South Africa hoping to become the soccer champions of Africa. (17.01.2013)

The Africa Cup of Nations is often a time for European club coaches to curse and fret, as key players run off to represent their countries mid-season. This year's tournament, however, barely impacts on the Bundesliga. (13.01.2013)