Many Cuban doctors work in Brazil, but the lion's share of their salaries are kept by Havana. Out of protest, one doctor has applied for asylum, putting Brazil in an embarrassing situation. 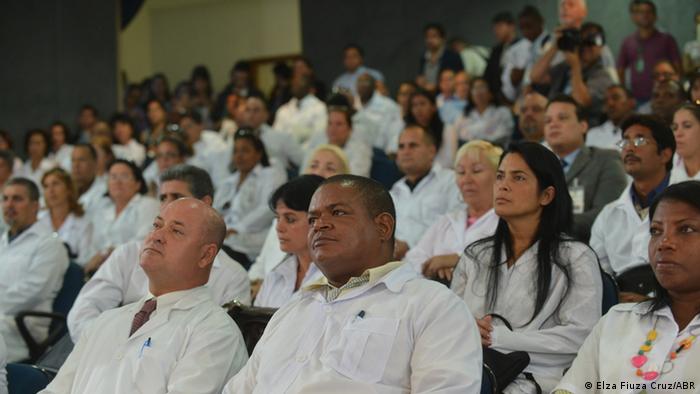 It is not exactly what Ramona Rodriguez had expected: In October of last year the Cuban doctor arrived in Brazil, a country with a severe shortage of physicians, to work in the far northeast state of Para, on the border to Suriname and Guyana.

There are very few doctors in this region of Brazil. Statistically, there is less than one physician for every 1,000 inhabitants. By comparison, Germany has a ratio of 1 to 233.

Rodriguez came to Brazil as part of the 'Mais Medicos' program (More Doctors); a program introduced by the Brazilian government last year to combat the shortage of trained medical personnel in the more remote regions of the country. 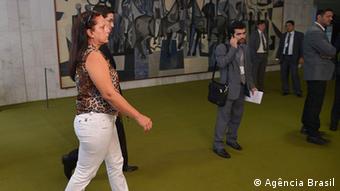 Ramona Rodriguez's asylum application has stirred a lot of controversy

About 6,500 doctors have taken advantage of the offer, and of these, some 5,400 come from Cuba. A special arrangement between Havana and Brasilia, however, stipulates that the salaries of the Cuban doctors be directly transferred back home.

The Cuban government, in return, only pays its doctors working in Brazil $400 a month. Another $600 for each month spent in Brazil is handed over to the Cuban doctors when they return home. The rest - more than $3,000 - is kept by the state - about 75 percent of each doctor's salary.

The Mais Medicos program has been a boon for Brazil; so much so, in fact, that President Dilma Rousseff was hoping it would give her a big boost in her election campaign for the 2014 presidential elections.

But all that has changed. The Mais Medico program is now more of a millstone around the president's neck than something to brag about - thanks to Ramona Rodriguez.

When Rodriguez came to Brazil she was aware of the financial conditions under which she and her fellow Cuban doctors were to work, but not those of her colleagues from elsewhere.

It wasn't until she arrived in Para that she discovered other foreign doctors were earning 10 times the salary the Cubans were getting.

Rodriguez felt robbed and betrayed - and applied for asylum in Brazil. In a number of interviews she described the situation of the Cuban doctors working in Brazil - a situation, it seemed, which the Brazilian government appeared all too willing to accept.

She said she did not talk about the salary question to her Cuban colleagues because they would have reported it to their Cuban superiors. Her daughter is contacted every day by the Cuban authorities who ask a lot of questions. She also has stopped meeting with Cuban colleagues. "If I called them, they would get in trouble for talking with a deserter, a traitor," she said. 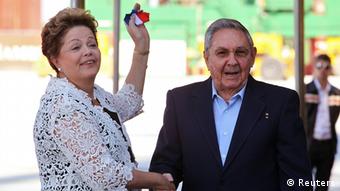 Now that a second Cuban physician has left the program, the Brazilian government is confronted with the very delicate issue of what decision to take in the Rodriguez asylum case. If the government were to grant her asylum, it would be an open invitation to all the other Cuban doctors to ask for asylum.

"Brazil is not likely to grant asylum to Rodriguez," says Luiz Fernando Martins Kuyven, a professor of international law at Mackenzie University in Sao Paolo. "Such a decision would not only endanger the Mais Medicos program, but also relations in general between the two countries." 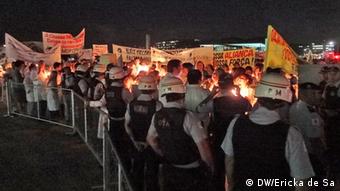 Brazilian doctors have protested against the 'import' of foreign doctors

It is also unclear how to handle Rodriguez's asylum application from a legal standpoint. Brazilian law recognizes individuals as refugees based on their nationality, ethnicity, religion, social group, or if their political convictions could result in persecution.

For Pietro Alarcon, a law professor at the University of Sao Paolo, these criteria do not apply to Rodriguez, and therefore, the National Committee for Refugees cannot grant her asylum, he says.

The committee could, however, decide otherwise, stresses Kuyven from Mackenzie University. If it came to the conclusion that Rodriguez could face political persecution, or even bodily harm, were she to return to Cuba, then it could grant her asylum, he notes. "In my estimation, Brazil should offer her asylum because, after all that has happened, she and her family will no longer be able to lead a normal life."

Brazil, meanwhile, is looking for a more pragmatic solution. It wants to renegotiate its Mais Medicos agreement with Cuba to boost the salaries of Cuban doctors. If the salaries were higher, it figures, there would be less interest in seeking asylum.

Over a million people have signed an online petition to grant asylum to former NSA contractor Edward Snowden in Brazil. However, experts doubt that the country will give in to this demand. (01.02.2014)

The Brazilian and US economies are closely linked, but with the cancellation of a state visit by President Rousseff to Washington, due to the NSA scandal, the relationship has noticeably cooled. (23.10.2013)

Brazil's reform movement has stalled since the mass protests in June. But activists plan to hit the streets again on September 7, the country's independence day, in a new drive for change. (06.09.2013)

Cuba has accused the United States of encouraging such an attack through "calls for violence." Washington earlier urged Cuba to release detained protesters.