Canada used to be hailed globally, especially vis-à-vis the US, for its progressive environment and social policies. But under the conservative government a drastic rollback has taken place, say green and rights groups. 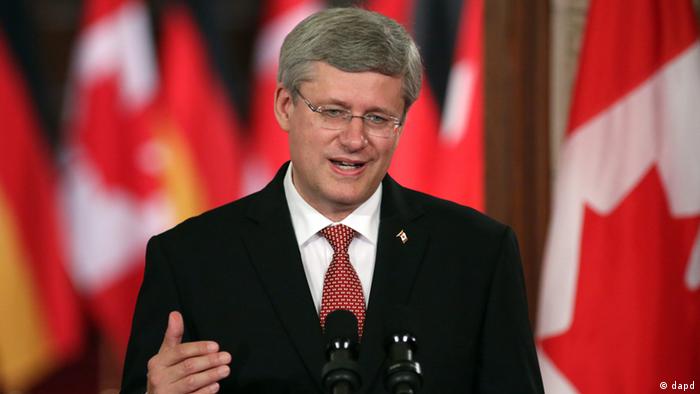 As Canadian Prime Minister Stephen Harper on Thursday will receive the annual "World Statesman" award from the Appeal of Conscience Foundation, launched in 1965 by a New York rabbi, for his work as a "champion of democracy, freedom and human rights" his approval ratings at home are plummeting.

According to a recent poll conducted by an Ottawa-based research firm, 50 percent of Canadians disapprove of their leader and nearly that many of his Conservative Party. The country is headed in the wrong direction say 45 percent of respondents.

Linda Luneau, a 73-year-old artist, is one of these Canadians. On 17 September she participated in a protest on the steps of Parliament, as session opened, and just days after the award to Harper was announced, to voice her distaste with his government and its cuts to social programs.

"I'm here today because I'm watching one program after another being destroyed. There's just so many things and now they want to introduce another bill and how much are we going to loose again?" 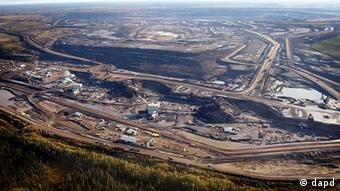 The list of their grievances with the direction Prime Minister Harper has taken the country is long. Internationally, it was Canada's withdrawal from the Kyoto Protocol last year – the first country to do so – that caused the biggest headlines.

But other controversial decisions taken by the government are less known outside of the country.

Since taking office in 2006, Harper and his Conservative Party have shut down the International Centre for Human Rights and Democratic Development, a think tank that promoted democracy and monitored human rights around the world and the Court Challenges Program, a program that helped fund court challenges to discriminatory laws on behalf of women, immigrants and gays and lesbians.

Environmental programs have also been on the chopping block. The most recent budget bill cut funds to Environment Canada for conservation programs, such as fisheries protection, and introduced limitations on the types of environment assessments of large-scale natural resource projects that can be undertaken.

The government argues the change in policy and procedure will promote economic growth.

Lana Goldberg, a member of Occupy Toronto and political science student at York University, asks: at what cost?

"This man [Harper] is changing the face of Canada and taking it in an extreme right wing direction. This regime has been approving pipelines and other mining projects with complete disregard for indigenous communities. It is just atrocious what is happening right now."

In response to the government's actions several indigenous groups are filing court challenges to the proposed pipelines that would carry bitumen from Alberta's tar sands through the British Columbia wilderness and indigenous land to the Pacific Coast. 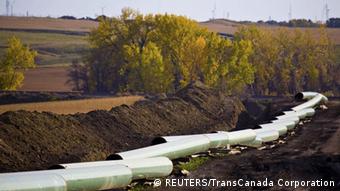 Tony Clarke, the executive director of the Polaris Institute, a social justice group, argues the pipelines would threaten "some of the most precious wilderness and examples of nature in the country." He adds, "for people who believe that the land is life, which is the case with First Nations' people, it's like taking a knife across the Mona Lisa. It's like completely destroying the work of art that nature's given us."

The construction of the pipelines from the tar sands to the West Coast and to the United States is a priority for Harper who sees the exploitation of Canada's oil and natural gas reserves as vital to its prosperity.

Not any more, adds Clark: "Most of that has been turned upside down. We have a government in power now that is a champion of the oil sands or tar sands, the largest industrial project of its kind anywhere in the world and arguably the most environmentally damaging industrial project on the face of the planet."

Harper's regressive environmental record has not gone unnoticed internationally. This year global civil society and international diplomats singled Canada out for its disruptive behavior and destructive policies on energy and extraction at the Earth Summit in Rio de Janeiro. It also rebuked Ottawa for its withdrawal from the Kyoto Protocol.

Once a strong proponent of multilateral agreements and negotiations, Canada is no longer. Kathryn White, President and CEO of the United Nations Association of Canada fears "we've [Canada's] left the building." 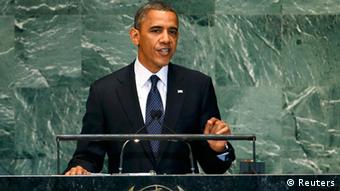 Unlike Obama, Harper chose not attend the UN General Assembly

Canadians would like their country to be a constructive multilateral partner. A survey conducted by the United Nations Association of Canada on the perceptions of Canadians toward the United Nations found that 88 percent of respondents felt that Ottawa should take a leading role in global security. And 72 percent “strongly agreed” that Canada should actively support United Nations initiatives that address environmental problems.

Stephen Harper apparently has a different view of Canada's relationship with the United Nations. He has decided to skip the UN General Assembly in New York in favor of being recognized as "World Statesman" of the year at the Waldorf Astoria hotel just a few blocks away.

Separatists in Canada's French-speaking Quebec get ready to take over the provincial government. But a surprisingly narrow victory in elections means the Parti Quebecois faces major obstacles in achieving its goals. (07.09.2012)

German Chancellor Angela Merkel has wound up a trip to Ottawa by calling for completion of negotiations on a free trade pact between Canada and the European Union. She said it would help reinvigorate the global economy. (16.08.2012)

After her summer break, Angela Merkel made her first bilateral visit to Canada. Ties between Berlin and Ottawa are robust, but the relationship could change from one of benign neglect to a more troubled friendship. (15.08.2012)