After hundreds of proposals and years of debate, a design for Berlin's newest monument has been selected. But it has drawn harsh criticism from those who say it symbolizes all the wrong things. 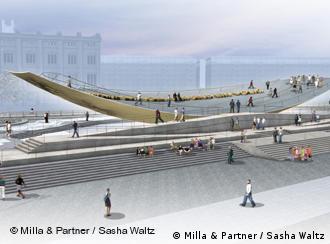 The reunification monument is set to occupy a central spot in the city, across from the Berlin City Palace, which is also slated to be rebuilt. But the design, titled "Citizens in Motion," by Stuttgart-based firm Milla & Partner has met with confusion and rejection - as well as enthusiasm.

Two different commissions reviewed designs for the project over the course of several years. Some 500 proposals were submitted from all segments of society, but the jury couldn't agree on any of them. That's when they changed the application process: only designated artists were invited to submit proposals. The second attempt drew 300 suggestions.

The event planning firm Milla & Partner won with their design of an enormous scale curving toward the sky that sinks and rises depending on where the monument's visitors stand.

The work is technically complicated and brings a number of security questions with it. At 55 meters (180 feet) wide and 20 meters deep, the structure reminds critics of a "swing."

The monument is planned to bear the inscription, "We are the people. We are one people."

One of Germany's most successful architects, Meinhard von Gerkan, had nothing positive to say about the design, describing it as "counterproductive" and suggestive of a state fair:

"The symbolism in this design is so superficial and unclear," he said. "On the one hand, you could say the swing tends toward the side where the majority stands. But it could just as well give expression to how easily the majority can manipulate others - that decisions are met quickly, like in a game, without weighing things effectively."

For many, the question is whether Germany needs such a monument at all. Are there not already enough structures that embody the country's unity? Germany's minister for culture, Bernd Neumann, is an energetic supporter of the design, but is also aware of the complex dimensions of the debate.

In "Citizens in Motion," Neumann sees a monument to happiness in light of the success of efforts to reunify the country:

"There are two ways to think about it. Some say, 'We don't need the monument at all - isn't the Brandenburg Gate enough?' And if that's your opinion, then I have to accept it, but the German parliament took a different stance, and it's my job as culture minister to implement their decision," he said.

"That's where the second problem emerges: Is the monument too folksy? Is it a bit like an amusement park attraction? But all I can say is, thank God we don't have a classical monument that - in the best case scenario - people will look at from a distance and honor. Instead, we have a monument that will invite people to enter it," Neumann added.

Neumann stresses how difficult it can be in a democratic society to decide on a monument with historically and politically symbolic dimensions. Discussions about the Holocaust memorial and others have caused just as much debate.

But ultimately the culture minister views Berlin as the winner. He's convinced the 10-million-euro investment will prove to be a magnet for the public.

"When the monument's up, it'll become a further attraction for our city. What more could you want?" he remarked.

Whether "Citizens in Motion" will be admired by more than just some playful elementary school groups won't be certain for at least another two years, when construction is complete.

Berlin is seen as the epitome of cool, urban grittiness. But insiders know it as one of the most nature-filled cities in Europe. Between green space and water, nearly half the capital belongs to Mother Nature. (12.04.2011)

Berliners disagree on how best to remember President Reagan

Former US President Reagan would have turned 100 last Sunday - an occasion which has unleashed a strong political debate in Berlin about how best to commemorate Reagan and his role in reuniting the once-divided city. (11.02.2011)