Israel has led the world in its vaccination drive. As it moves forward, the country is also debating what to do with people who don't want to get the precious jab. 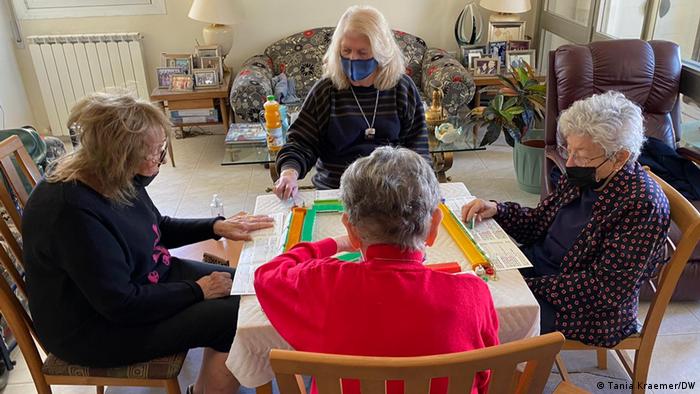 For over a decade, every Tuesday, the long-time friends met to play Mahjong, a Chinese board game. Throughout 2020, they played online because of the pandemic.

"It's really the first time we've met since March. It's very amazing, it's gratifying," says Ruth Rogers, an Israeli-American hosting her friends in her flat in Jerusalem. "It's very nice that everybody is ok and remained pretty healthy throughout the year, but it was also pretty lonely. And we didn't forget how we look, but we all need a haircut," says the 88-year old, laughing. They missed sitting together around a table after a year of forced solitude at home. "I feel like at this point I am free. Just to be able to talk to people is wonderful", adds Esther Taragin.

Aged between 84 and 95, Ruth and her friends were part of the first group to receive the BioNTech-Pfizer vaccine after Israel's vaccination drive began in December. So far, over 90% of their age group has been vaccinated.

"Thank God my husband and I stayed safe and healthy, we both got the vaccinations and we are proud owners of 'Green Passes,' but nowhere to go (with it) for now", says Judy Feld, referring to her immunization certificate issued by the Ministry of Health. It is expected to allow less restricted access to vaccinated people or to those who have recovered from COVID-19.

Debate over benefits and measures 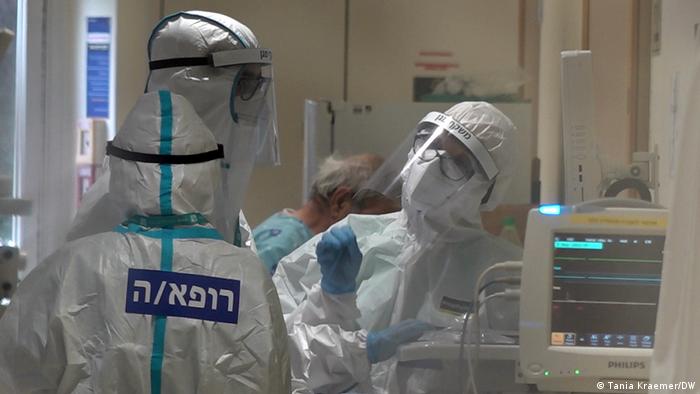 Israel's infection rates are falling steadily, however the hospitals are still full with seriously ill patients

As its vaccination drive continues, the Israeli government has started to ease restrictions after a third prolonged lock-down. The country of nine million people has been applauded for its rapid vaccination and its data-sharing to study the vaccine almost in real-time. Persistently high infections rates have started to drop slowly. However, the number of hospitalized seriously-ill patients remains high.

Now, the public debate has shifted to the government's measures to reopen the economy and to the benefits and rights of the vaccinated and those who may not want to. In recent days, health officials voiced concerns that the vaccination drive has slightly  dipped (from 200,000 per day at peak times in January).

Prime Minister Benjamin Nethanyahu, who's made the vaccination campaign a major election issue, warned that more than half a million Israelis over the age of 50 have still not gone to get their jab. "I remind you of the most dramatic piece of data," he said this week. "97% of deaths and 93% of severe cases are in this group." Since the start of the pandemic over 5,400 people have died of COVID-19.

Overall, four million Israelis have been vaccinated so far, and about 2,6 million of them have received both shots. Since February, everybody aged over 16 has been called upon to get their shot. "We are trying to see what are the attitudes of people towards the vaccine. There is a tremendous amount of fake news in the public," says Dr. Boaz Lev, head of the vaccine task force at the Ministry of Health in Jerusalem. "This is worrisome, but it will take a while to know what the compliance is."

The Ministry of Health set up a task force to combat false claims and conspiracy theories on social media platforms about vaccination. Other information campaigns target the Arab-Israeli and Jewish ultra-orthodox communities which have been more reluctant to get vaccinated for different reasons. "Recently, I spoke to rabbis who head religious schools to explain more about the vaccine, its safety and its efficacy. And we also spoke about fake news concerning fertility and other issues," says Dr. Lev. 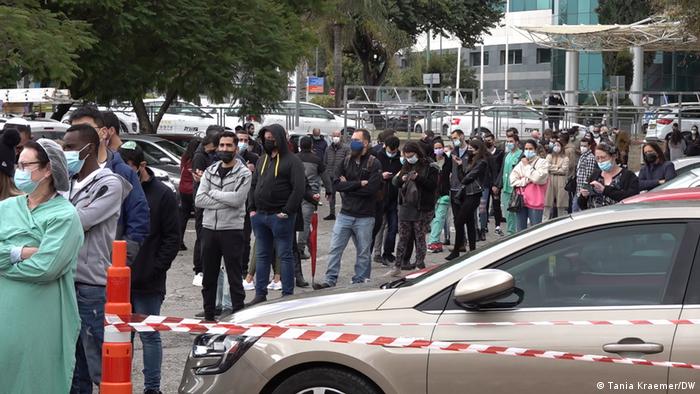 Although Israel has been hailed for its vaccination drive, there is still a significant number of Israelis who have doubts about the jab

But there are also skeptics among secular, younger Israelis. Michal, a mother of two, receives frequent text messages from her health care provider inviting her to one of its vaccination centers.

"I just feel it should be a personal choice. I am happy that there is a vaccination," she says. "I just don't think it is necessary for me. I am young, I am 41-years old, I am healthy." She says she doesn't adhere to any conspiracy theories but just follows a different approach to medicine. Her family and friends, who were all vaccinated, are not happy with her decision. "It feels like now, in Israel, there is pressure from everywhere to get vaccinated," Michal acknowledges. She doesn't exclude that she might get vaccinated in the near future after all.

Much will depend on what approach the government and healthcare providers take to convince those who are still hesitant to get their jab. This week, the government announced that as of Sunday museums, malls, libraries and street stores will be re-opened to all. But gyms, pools, cultural and sport events are expected to be made accessible to "Green Pass" holders only.

International travel could also be connected to the pass. Israel's main airport is currently closed except for few repatriation flights for Israeli nationals. Additionally, the government is reportedly looking into the possibility of legally enforcing vaccinations for certain professions, like teachers or bus drivers or subjecting them to testing every 48 hours.

For now, the official tone is to appeal to people's sense of awareness and solidarity. "You will decide whether you want to be part of celebrations or left behind," Health Minister Yuli Edelstein wrote in recent tweet. "Just lend the vaccine a shoulder."

Myanmar: Is the EU doing enough to support the resistance?