Could expat votes potentially tip US election? | World | Breaking news and perspectives from around the globe | DW | 08.11.2016

If the 2016 presidential vote is close, Americans living abroad might decide the winner. In Germany, for instance, non-military expatriates overwelmingly favor Hillary Clinton. But will their votes make any difference? 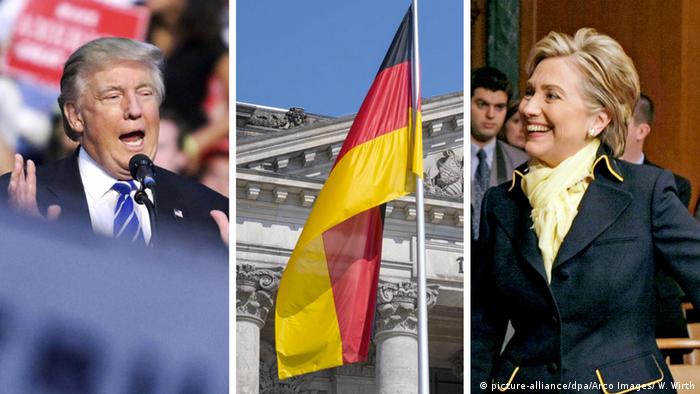 One of the novel aspects of a campaign that has been full of firsts is the amount of effort one side - the Democratic Party - has put into wooing voters who permanently reside outside the United States. The US State Department estimates that some nine million American live outside the country, and prominent Democrats like Elizabeth Warren and Howard Dean have directly courted them via organizations like Democrats Abroad.

Germany has been one focal point of these efforts. Along with London, Berlin was one of the places where the Avvaz organization chose to launch a voter registration app explicitly aimed at stopping Republican candidate Donald Trump. Expat Democratic activists are confident that this year American voices will be heard from abroad.

"Now more than ever is a time when the votes of Americans living abroad like myself - and we're nearly nine million at the moment - are going to make a difference in this election," the head of the Berlin chapter of Democrats Abroad, Gwendolyn Lynch, told Deutsche Welle at the height of the campaign. "Even those who maybe didn't vote Democratic in years past, this year is really quite a special election. I think people are coming out and making a smart choice with their votes."

The Federal Voter Assistance Program estimates the number of Americans who are eligible to vote and who live abroad at 5.7 million - more than the residents of all but 20 American states. That has led activists and some journalists to call them the "51st state."

But those expats' votes are spread across all fifty of the actual United States, so their political clout in general is limited. That, of course, is true as well for the 111,000 Americans who lived in Germany in 2015.

"Overseas votes are too small in number to influence the presidential vote outcome in all but the most close elections," Mark Kayser, a professor of political science at the Hertie School of Governance in Berlin, told Deutsche Welle.

But this election has been unusual in a number of respects. And one example from recent history suggests that ballots cast from abroad could help determine the next US president. 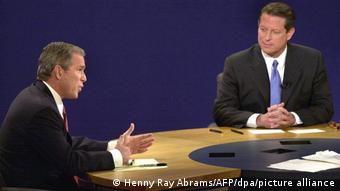 Foreign votes tipped the balance between Bush and Gore in 2000

One thing votes from Americans abroad in general could do is offset votes from American military personnel serving abroad, who in the past have had an easier time casting ballots. That group did, in fact, make a key difference in the presidential election 16 years ago.

"The vote in Florida in the 2000 presidential election was a rare case where they did matter," Kayser said. "Since a large proportion of overseas votes are from the military who lean, on average, Republican, the overseas votes helped George W. Bush."

Bush won the state of Florida by only 537 votes over Al Gore, propelling him to Electoral College victory even though he lost the popular vote. The New York Times newspaper later concluded that ballots cast from overseas made the difference in that result.

In the last US election, only 12 percent of expats cast their ballots, and an increase in overseas participation could be decisive, even if the raw numbers it yielded are small. That is one lesson from 2000.

"When an election is so close, everything matters and a strong argument can be made that the intervention by the US Supreme Court to stop the recount, combined with a flawed Democratic recount strategy and the third party candidacy of [Ralph] Nader, were the most proximate causes of Gore's loss in Florida," Kayser explained. "A later review by the New York Times showed that a full recount of all counties (not just the ones that the Democrats had demanded) would have resulted in a narrow victory for Gore."

As voting opened around the US, the Real Clear Politics aggregate of polls gave Hillary Clinton a roughly 3 percent lead in the popular vote, but only a razor-thin 6 vote advantage in the Electoral College, which actually elects the US president. 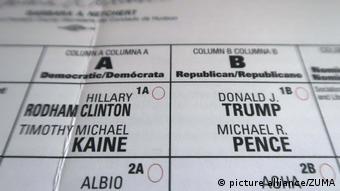 "If, as several commentators have suggested, 2016 ends up as close and contested an election as 2000, overseas voters may find themselves playing as decisive a role as they did in Florida 16 years ago," the University of Oxford's Rothermere American Institute wrote in a report published last month.

The first results from abroad

To judge from the size and number of election parties being held in cities from Berlin to Melbourne, Australia, the Democrats have a clear advantage among non-military Americans living overseas. The numbers of members of Democrats Abroad dwarf those of the corresponding conservative organization Republicans Overseas. Tellingly, on election day, the homepage of Republicans Overseas in Germany listed: "No events yet."

It won't be until well after the election, if at all, that we know whether the Democrats' efforts to get out the global vote made a difference in electing the next US President.

There were, however, some numbers coming out of Israel on the morning of November 8. The iVote organization, which did an "exit poll" of expat Americans in that country, concluded that they voted for Trump by a margin of 49 percent to 44 percent for Clinton.

That is actually bad news for Trump since American expats in Israel are traditionally quite conservative. Trump's two predecessors as Republican nominee, John McCain and Mitt Romney, took 76 and 85 percent of the vote respectively.

'I was always a Merkel person,' says US presidential candidate Donald Trump

Contradicting his previous comments, US presidential candidate Donald Trump has hailed German Chancellor Angela Merkel as a model leader. In the past he said Merkel was ruining Germany with her refugee policy. (30.09.2016)

What Germans hope and expect from the US election

A whopping 86 percent of Germans would vote for Hillary Clinton for US president and only 4 percent would choose Donald Trump, a recent poll showed. DW spoke to five very different Germans about the election. (01.11.2016)

The Midwestern state was the first to head to the polls on abortion since the Supreme Court ended the national right to the procedure. With unusually high voter turnout, the state chose to preserve the right to choose.