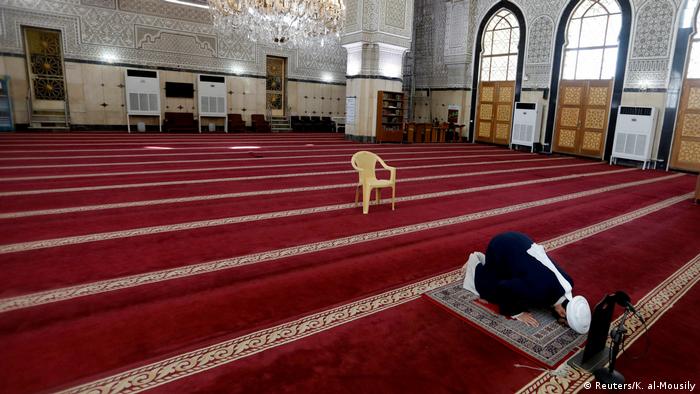 As public health authorities struggle to contain a devastating pandemic, religious leaders and state institutions across the Middle East have taken extraordinary steps to guide the faithful through uncertain times and prevent the spread of the novel coronavirus.

In Kuwait, the call to prayer was changed to urge believers to pray from home, a historical practice reserved for only the rarest occasions.

Although civil and religious authorities have taken varying measures to curb the outbreak, the message has nearly always been the same: Stay at home, avoid contact and wash your hands regularly.

"Muslims are no different than anyone else," said Rose Aslan, assistant professor of religion at California Lutheran University. "Most Muslims in the world are practical and are staying at home like everyone else."

'Cleanliness is part of Islam's teachings'

For many authorities in region, the pandemic has been an exercise in coupling religious edicts with sound public health advice.

For example, in the United Arab Emirates, the council in charge of religious affairs issued a fatwa — a legal opinion on Islamic jurisprudence — that equated adherence to public health directives to religious duty.

"It is a religious obligation for all segments of society to strictly adhere to all public health directives and regulations provided by the dedicated state agencies as well as to take all necessary measures to prevent the transmission and spread of the illness," said the fatwa. That includes "frequently washing hands with soap and water, for cleanliness is part of the teachings of Islam.

Drawing from the past

Although religious leaders have provided guidance to face the difficult circumstances brought on by the pandemic, the closure of mosques — the center of community for Muslims — has, for many, amounted to the most challenging part of coping with the outbreak.

But there has been precedent. By drawing on the intellectual heritage of Sunni Muslim scholars, religious leaders have offered historical perspective to justify the closure of mosques.

"Because we're in a very critical situation, they've drawn upon previous Muslim scholars who spoke about what Muslims have done during times of plague in the past," said Aslan. "They're going back to that scholarship to see how scholars reacted and coupling that with public health knowledge."

In many ways, by situating such decisions within historical perspective, it has provided comfort for the faithful who view with reverence their obligation to partake in congregational prayer on Friday.

Read more: Germany to push for imams to be trained locally, not abroad

Preparing for the future

But other challenges remain. With Ramadan, Islam's holiest month, set to begin in April, it is unclear how Muslim communities across the region will cope with the restrictions. But preliminary discussions have churned out innovative ideas to deal with the times, including breaking fast virtually.

"This is a really important time of the year for Muslims — to eat together, to break bread together with other people and to pray together in really intense and emotional prayer sessions," said Aslan.

"So it's going to be strange to break bread virtually with other people. Some people are lucky enough to be quarantined with large families, while other people are all alone, but it's really going to differ from home to home this year."