Coronavirus: No fathers allowed in delivery rooms | Germany | News and in-depth reporting from Berlin and beyond | DW | 23.03.2020

Among other things, the coronavirus is enforcing changes to German obstetrics. Pregnant women must be prepared to give birth without their partner there to support them — a situation many find very frightening. 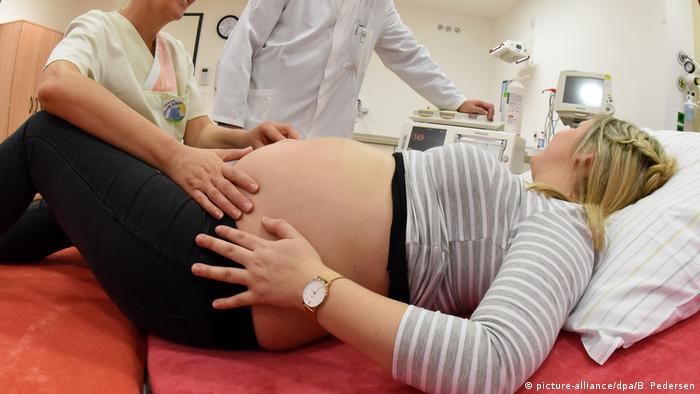 Romina is heavily pregnant. When she called her hospital in the western German city of Bonn a few weeks before her due date, she was flabbergasted to find out, by chance, that in order to minimize the risk of coronavirus infection at the hospital, her husband probably wouldn't be allowed to be present at the birth — not in the delivery room, and not on the maternity ward, either.

So far, the data available suggests that pregnant women and newborns are not at higher risk from coronavirus. However, hospital employees and other patients must, of course, be protected. This is why the only people currently allowed to enter the clinic are expectant mothers themselves.

"I wasn't aware of this rule until then; it was never communicated directly," says 35-year-old Romina. In principle, she understands why the hospital is concerned: "We need the midwives. It's very important that they stay healthy." But Romina is finding all the uncertainty difficult. "I don't understand why the hospitals are all taking different approaches," she says.

Her husband is sad as well. He wants to support his wife during the pain of the contractions, and not to have to wait until days after the birth before he can see his child. "He's just as much a part of this as I am," says Romina.

Just one week ago, the German federal and state governments decided to impose severe restrictions on hospital visitors to try and stem the spread of the coronavirus. The exact implementation of this is determined by the German states, and they in turn are often all too happy to let hospitals themselves decide the details of putting the restrictions in place.

Some hospitals are allowing people to attend births, while some are not, and the situation keeps changing by the hour. Some clinics are even rescinding the ban under pressure from parents. "I've now been told to call and ask just beforehand," says Romina.

The situation is hard for her and for the whole family. Not only does she need to be able to prepare for the birth; she also has to find someone to look after her daughter if her husband is allowed to join her in the delivery room after all.

"It seems that hospitals are being allowed to make their own decisions," says Katharina Desery from Mother Hood, a German parental initiative that supports mothers and children. "We see this as highly problematic, because heavily pregnant women all over Germany are now having to contact their hospitals every day. It also places huge strain on the midwives working in the delivery rooms, because they have to answer these enquiries as well as doing their normal job."

Since the first hospitals decided not to allow fathers into delivery rooms anymore, Mother Hood has been receiving a lot of desperate calls. "This is an absolute disaster for the mothers and fathers who are contacting us," says Desery. Many are frightened, some even in shock. Desery explains that the expectant mothers understood why fathers would not be allowed to visit them on the maternity ward and accepted this, but the thought of not having their partner with them during the birth was "unbearable" for the women — and also for the fathers-to-be. 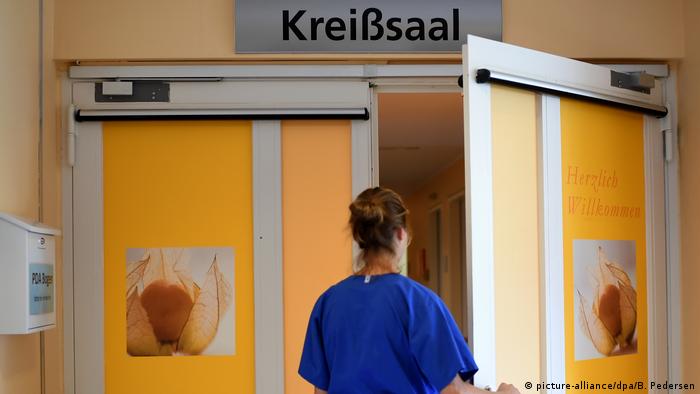 "Of course, we know that hospitals are in an extremely stressful situation right now," says Desery. But she simply doesn't understand why fathers are considered to be such a great risk during the birth. The explanation given is that the fewer people there are around in the hospital right now, the better. "But the father isn't just a visitor; he's also an emotional support for the mother, which means he's part of the birthing team if the mother wants him to be," Desery insists.

The World Health Organization (WHO) writes, somewhat vaguely, that women's reproductive rights must still be respected despite the coronavirus crisis, and Desery sees this as an indication that husbands must not be banned from accompanying their wives without a good reason.

Situation aggravated by a shortage of midwives

The mothers' situation is aggravated still further by the fact that there simply aren't enough midwives. The German Midwifery Association and the German Society of Gynecology and Obstetrics have been warning for some time that the shortage is causing a decline in obstetrics care. In so-called Level I hospitals, in particular, with large neonatal intensive care units attached to them, midwives often have to attend to several women all giving birth at the same time.

"That in itself is already a safety risk, and that risk will now be intensified if the women are completely on their own for long periods of time," says Desery. Support for expectant mothers is therefore not just a luxury; the lack of it is a problem.

The German Midwifery Association (DHV) is aware of the new difficult situation. "Unfortunately, we can't just conjure up more midwives and make them available to hospitals," says Andrea Ramsell, the DHV's employee adviser. "The personnel situation is a difficult one — we've been pointing this out for years." The DHV is therefore appealing to hospitals to reconsider when the family involved is not from a high-risk area. "It's important for both mother and child that the birth should be a positive experience. Good midwifery contributes to this, but so does a trusted partner."

Support from a trusted person

Romina from Bonn highlights another problem. "What happens if the birth doesn't go according to plan and the child has to be taken to a special clinic, for example? Who makes that decision?" The mother may be under anaesthetic and incapable of expressing her wishes. "Going into the delivery room without someone to support you, someone you trust 100%, that would be the worst, she says.

Because of the ban on visitors in delivery rooms and maternity wards, some of Romina's friends are now planning to have outpatient births. This means that the new mother goes home just a few hours afterwards — provided both she and the child are well. "The problem is that this is also hard to plan," says Romina.

Why the United States has a high rate of maternal mortality

Worldwide, far fewer women die from pregnancy-related complications than 25 years ago. In the US, however, the number has risen — and it's African-American women who are most affected. (29.09.2019)