An ongoing surge of infections in the Midwest has fueled the outbreak in the US, which has reported 6 million cases. Doctors in France have warned about the dangers of reopening schools. Follow DW for the latest. 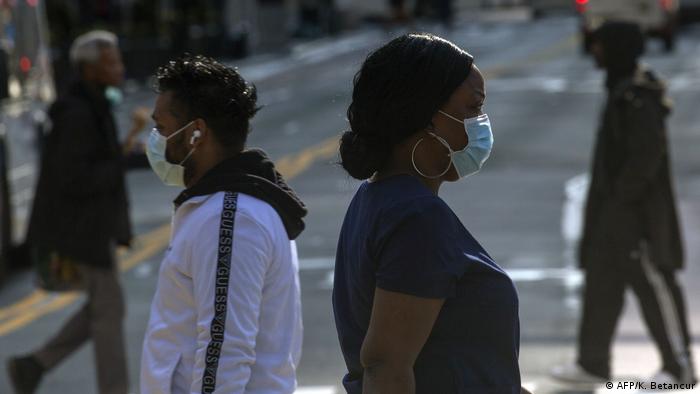 The United States has reported 6 million infections, nearly a quarter of all cases worldwide.

The head of the US Food and Drug Administration (USFDA) hinted in an interview that a future vaccine against the coronavirus might be given emergency approval before the end of trials, which are designed to ensure its safety and effectiveness.

Three Western drugmakers are well along with their Phase 3 clinical trials, involving tens of thousands of participants. The three are AstraZeneca, which is partnering with Oxford University in England; Moderna, collaborating with the US National Institutes of Health, and the Pfizer/BioNTech alliance.

Read more: COVID-19 vaccine: From the lab to your doorstep

Brazil registered more than 120,000 deaths and 3,846,153 infections from coronavirus, the Health Ministry said. Brazil is just the second country to surpass a death toll of 120,000 in the pandemic, after the United States, where the number killed is now more than 182,000.

The outbreak is advancing at a slow but devastating pace, said Christovam Barcellos, a researcher at the public health institute Fiocruz. "Brazil is unique in the world. Since the start of the pandemic, its curve has been different from other countries', much slower," he said. "It has stabilized now, but at a very dangerous level: nearly 1,000 deaths and 40,000 cases per day … And Brazil still isn't past the peak."

Venezuela ordered the country to lockdown for a full week, as the nation is gripped by the coronavirus pandemic. "Everybody be prepared for seven days of a really radical quarantine," President Nicolas Maduro said during a state television broadcast.

The country has been under lockdown measures since March and the government is now attempting to keep residents on a permanent alternating lockdown dubbed "7+7," with one week of total confinement followed by a week of reopening.

What happens in severe cases of COVID-19?

What happens in severe cases of COVID-19?

Doctors in France have expressed concern about students returning to school next, as the number of coronavirus cases in the country keeps surging. "The rules planned for the start of school on September 1 do not safeguard either staff or pupils and their families," doctors wrote in an open letter published in the daily Le Parisien on Sunday. The doctors called for a mandatory mask-wearing policy for everyone above the age of six, adding that established measures were not enough to halt the current rise in infections.

Germany's Bundestag will step up its coronavirus-related security measures after the summer break, in response to the country's increasing number of infections. Bundestag President Wolfgang Schäuble urgently recommended wearing a mask in all buildings of the Bundestag starting Monday.

"This urgent recommendation applies to all people and all traffic areas such as the corridors and stairwells, lounge areas, washrooms, dining areas (with the exception of people at tables) and the library, but also for boardrooms and meeting rooms," of the legislature.

How will the pandemic impact the global economy?

Romania's parliament is set to vote on a motion of no confidence against the government over its handling of the coronavirus pandemic. The motion was introduced by the PSD, the country's largest opposition party, which has accused the conservative minority government of using precautions against the pandemic to impose overreaching restrictions on personal freedoms.

UK Finance Minister Rishi Sunak urged diners to keep going out to eat, even as a popular government scheme offering half-price food in restaurants this month ended. The "Eat out to Help Out" initiative was meant to boost a hospitality sector that has been especially hard hit by the pandemic, by offering 50% off of the price of meals on the first three days of the week at participating restaurants, up to a maximum of 10 pounds ($13, €11).

South Korea has placed new limits on dining at restaurants and closed fitness centers and after-school academies in the greater capital area to slow the spread of the virus. The country has reported 299 new COVID-19 infections, the 17th consecutive day of triple-digit increases brought the national caseload to 19,699, including 323 deaths.

The Korea Centers for Disease Control and Prevention said 209 of the new cases came from the capital Seoul and nearby Gyeonggi province as well as Incheon, a region that had been at the center of a viral resurgence this month.

Australia has reported its most deadly day since the start of the pandemic, though the number of new infections in the country's virus epicenter fell to a near two-month low.

Victoria state said its COVID-19 death toll rose by 41, including 22 fatalities which came from aged care facilities in the weeks leading up to August 27. Some 73 new infections were registered in the past 24 hours, the lowest since July 3, as the state capital Melbourne is in its fourth week of a six-week lowdown.

Uighur residents of Xinjiang in northwestern China are being forced to take unproven traditional medicines, according to an Associated Press report. There is a lack of rigorous clinical data showing traditional Chinese medicine works against the virus, and one of the herbal remedies used in Xinjiang, Qingfei Paidu, includes ingredients banned in Germany, Switzerland, and the US.

In Auckland, New Zealand, schools and businesses reopened as the lockdown in the country's largest city was lifted following a resurgence in cases. The Pacific island nation has recorded 1,387 total confirmed cases and 22 deaths since the start of the pandemic.

Ghana is set to reopen air borders to international travel, starting September 1. The country's borders have remained closed since March to limit the spread of the coronavirus, President Nana Akufo-Addo said in a speech to the nation.

But the reopening will only apply to international arrivals by airplane only. Land and sea borders will remain closed, he said.

Is the pandemic good for the environment?

US election: Trump, Biden face off in Florida over coronavirus 3h ago

New Zealanders vote to legalize euthanasia but not cannabis 6h ago