Coronavirus digest: Next pandemic could come 'within a decade,' G20 panel says

A G20 expert panel has warned that the world is not ready for the next COVID-like health crisis. The WHO reported a possible link between mRNA vaccines and a rare heart inflammation. Follow DW for the latest. 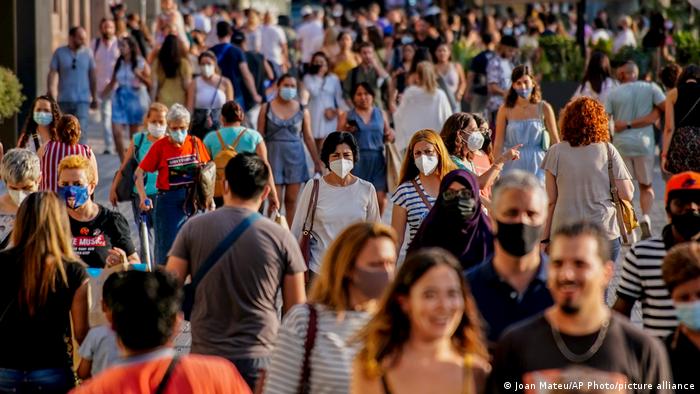 In the final communiqué of the G20 finance ministers and central bank governors' meeting in Venice, Italy, the monetary policy leaders expressed concerns about how the Delta variant first detected in India has overtaken nations like Brazil and South Africa and potentially threatens the global economic recovery.

The final communiqué opens, "the recovery is characterised by great divergences across and within countries and remains exposed to downside risks, in particular the spread of new variants of the COVID-19 virus and different paces of vaccination."

Earlier Saturday, a panel of experts convened by the G20 told the fiscal bosses the world needs to invest more to avoid a COVID pandemic-like situation in the future. They presented a report to G20 finance ministers during a summit in Venice, Italy.

"The world is far from equipped to prevent or stop the next pandemic. There is every likelihood that the next pandemic will come within a decade — arising from a novel influenza strain, another coronavirus, or one of several other dangerous pathogens," said the High Level Independent Panel in their report.

The panel recommended that nations collectively commit to increasing spending for prevention and preparedness by at least $75 billion (€63 billion) over the next five years.

Tracing the origins of COVID-19

Here's a rundown of the latest coronavirus news from around the world:

"The European Union has kept its word," von der Leyen said in a statement. "By tomorrow, some 500 million doses will have been distributed to all regions of Europe."

"COVID-19 is not yet defeated. But we are prepared to continue supplying vaccines — also against new variants. Now the member states must do everything they can to ensure that vaccinations move forward. Only then will we all be safe."

German companies have asked the government to come up with a plan to avoid future lockdowns, even as cases are on the rise. They warned that blanket closures often have serious consequences.

Managing Director of the Federation of German Industries (BDI), Joachim Lang said, "With a high vaccination rate in Germany, incidence [of infections] alone should no longer be the measure of all things."

Germany recorded 952 new cases on Saturday, bringing the tally to 3,735,420. Data from the Robert Koch Institute, the country's health authority for infectious diseases, said the death toll rose by 35, coming up to 91,225.

Football fans will not be allowed to watch the Euro 2020 final between England and Italy at the Olympic stadium in Rome, the city announced.

The decision to ban public viewing of the event came amid concerns over a further spread of the coronavirus.

But unlike other Italian cities that banned public viewing altogether, fans in Rome can still gather to watch the match on large screens at the fan zone at the Colosseum and the fan village at the Piazza del Popolo.

Will Euro 2020 further entrench the pandemic?

Officials said 26 of the new cases had spent time in the community while being infectious.

"I think it is pretty clear that unless we reduce that level of people in the community that are infectious, we won't be able to turn things around as quickly as we can or as quickly as we should," said State Premier Gladys Berejiklian in an interview.

Health authorities said no fully vaccinated people have required hospital care and 79% of those admitted have received no vaccine doses.

Capital city Seoul and neighboring areas will be placed under strict restrictions starting Monday. South Korea has fully vaccinated about 11% of its population. The country aims to inoculate 70% of its people by September this year.

The White House slammed Republicans who have questioned the government's efforts to drive up vaccination rates.

"The failure to provide accurate public health information, including the efficacy of vaccines and the accessibility of them to people across the country, is literally killing people, so maybe they should consider that," said White House Press Secretary Jen Psaki. She was addressing South Carolina Governor Henry McMaster's attempts to block door-to-door efforts to provide vaccination.

Rio de Janeiro has allowed football fans to attend the Copa America final against Argentina, at the Maracana stadium. However, only up to 7,800 people, or 10% of the stadium's capacity will be allowed to attend.

Spectators will need to present a negative COVID test taken 48 hours in advance and will be asked to observe social distancing inside the venue.

Are the Euros 2020 a superspreader event?

Algeria's newly appointed prime minister Ayman Benabderrahmane is reportedly infected with COVID-19, according to state television. He will quarantine for seven days while performing his duties virtually.

The president of Algeria, Abdelmadjid Tebboune, has reimposed restrictions such as mask-wearing and social distancing Saturday to stem the spread of the virus in the country.

Senegal signed an agreement with the European Union, the US, some European nations and other partners to allow vaccine production at the Pasteur Institute in Dakar. A new plant, set to start construction this year, is expected to produce 25 million vaccine doses each month by the end of 2022.

The move comes as Africa battles a third wave of the virus and a shortage of vaccines. The new vaccine site will lay the foundation of "pharmaceutical and medical sovereignty, and also increase access to affordable vaccines in Africa, and enable vaccine production to rapidly respond to new pandemics," said Senegal's Economy Minister Amadou Hott.

The World Health Organization (WHO) said there was a possible link between coronavirus vaccines using mRNA technology and a rare heart inflammation.

"The reported cases have typically occurred within days of vaccination, more commonly among younger males and more often following the second dose the of COVID-19 mRNA vaccines," said a statement by the Global Advisory Committee on Vaccine Safety (GACVS). However, the committee maintained that the benefits of the vaccines outweighed the risks.