Madrid and the Basque Country were added to a list that includes the regions of Aragon, Catalonia and Navarra. Spain is again managing the worst infection rate in western Europe. 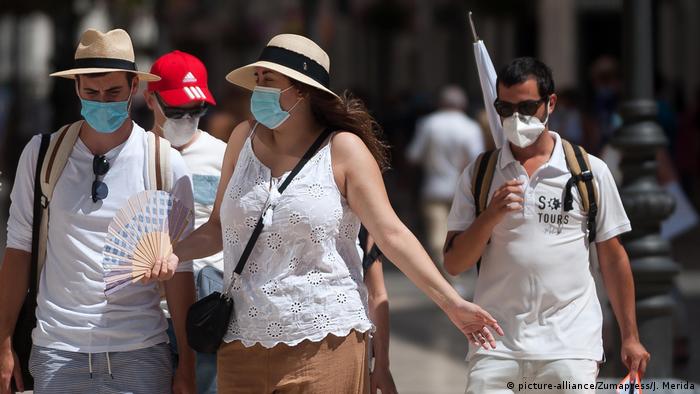 The German foreign ministry has extended its travel warning to two more regions in Spain due to rising infections.

Madrid and the Basque Country have been added to the Spanish regions of Aragon, Catalonia and Navarra, as places where unnecessary trips should be avoided.

The ministry justified the decision by saying the two areas were experiencing "high numbers of infections again."

Spain is again managing the worst infection rate in western Europe, with an average of 4,923 new daily cases reported over the past seven days.

That figure is higher than the average daily infection rate of Britain, France, Germany and Italy combined. Spain currently has 95 coronavirus cases per 100,000 people, compared with 24 in France, 17 in Britain, 13 in Germany and eight in Italy.

The number of confirmed cases in Germany increased by 1,226 to 218,519, according to data from the Robert Koch Institute for infectious diseases.

The death toll also rose by six to 9,207. Experts have warned that Germany is entering a second wave of the virus, with the daily number of new cases reaching figures not seen since April and May.

Germany's health minister urged people to stick to hygiene measures in the wake of the new figures. He also cast doubt over a reported new vaccine in Russia.

Meanwhile, the German government and tourism giant TUI have agreed to a second massive aid package, this time to the tune of €1.2 billion ($1.4 billion). The new funds come on top of April's €1.8 billion loan from Berlin.

Schoolchildren in North Rhine-Westphalia (NRW) have returned to the classroom after a six-and-a-half week break. New measures are in place, including mandatory face masks for secondary school students in order to prevent coronavirus outbreaks.

Switzerland will allow events with more than 1,000 people as of October 1, provided organizers agree to strict hygiene measures and have authorization from regional authorities, the government has announced.

Singapore said most foreign workers can now resume work as their crowded dormitories have been cleared of COVID-19 after months of lockdown and testing.

In a statement, the Ministry of Manpower said that all but 17 dormitories have been cleared, which now serve as quarantine facilities.

Foreign workers living in the dormitories made up the bulk of Singapore's 55,353 COVID-19 cases.

According to the ministry, all the residents have either recovered or tested negative, except for 22,500 workers in quarantine.

Most of them can now return to work, including 81% of the 387,000 workers in the construction and processing industries.

Indian authorities say the country's fatality rate has dropped below 2% for the first time. India reported 834 coronavirus deaths on Wednesday for a total of 46,091.The country's coronavirus caseload topped 2.3 million after 60,963 infections were recorded in the last 24 hours.

US President Donald Trump announced that the US has reached an agreement with drug company Moderna to provide 100 million doses of a coronavirus vaccine candidate. The US has recorded over 5 million cases of the virus and nearly 165,000 deaths.

Meanwhile, the World Health Organization (WHO) said that routine, non-essential dental work should be delayed until COVID-19 transmission rates drop sufficiently. The WHO said check-ups, dental cleanings and preventive care could be postponed, and released guidance for dentists on how to minimize the risk of transmission.

"WHO advises that routine non-essential oral health care  which usually includes oral health check-ups, dental cleanings and preventive care — be delayed until there has been sufficient reduction in COVID-19 transmission rates from community transmission to cluster cases," the guidance says.

"The same applies to aesthetic dental treatments. However, urgent or emergency oral health care interventions that are vital for preserving a person's oral functioning, managing severe pain or securing quality of life should be provided."

Prime Minister Jacinda Ardern announced that she was shutting down the city after four new cases of COVID-19 were detected within the same family, despite international borders being closed to foreigners and returning New Zealanders being put into mandatory quarantine.

The restrictions, which prevent people from going to work and school and gathering in groups of more than 10, will be in effect for three days, until Friday.