Germany's health officials are expecting a sharp rise in coronavirus cases around the New Year. Meanwhile, China has placed the city of Xi'an and its 13 million residents under lockdown. Follow DW for more. 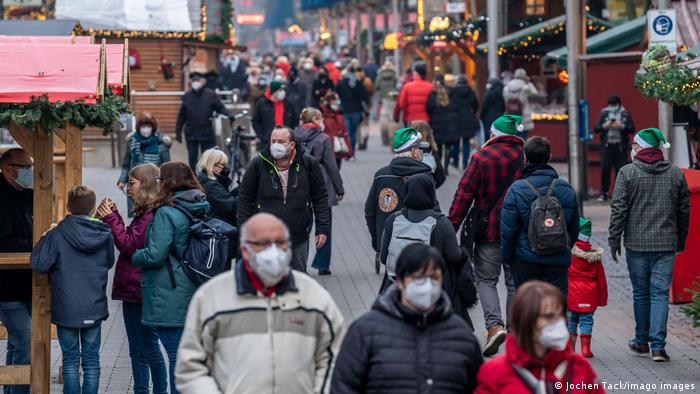 Shoppers in the German city of Duisburg, where masks must be worn in densely packed urban spaces

German Health Minister Karl Lauterbach on Thursday said he expected a rapid increase in the number of infections of COVID-19 around the New Year period.

Lauterbach, himself a trained epidemiologist, told public broadcaster WDR2 that, unlike some other European countries, Germany had not yet seen a large and sudden wave from the omicron virus strain.

"That will change around New Year and in the first week of January," Lauterbach said.

The German government is urging people to limit their contacts over the holiday period and to get vaccinated. That includes booster shots for those who have already had their initial vaccines.

Germany is set to introduce contact restrictions between Christmas and New Year aimed at flattening the curve of new infections.

Just over 70.7% of Germany's population has received a full initial course of COVID-19 vaccination, while 35% have had boosters.

Meanwhile, thousands of people demonstrated against coronavirus measures in the southern German city of Munich on Wednesday, with police reporting that many participants displayed aggressive behavior toward officers.

Altogether 11 people were arrested, and 14 criminal incidents were reported, including the display of insignia from unconstitutional organizations and violent resistance. At least one officer was badly injured.

Germany will also add the US, Spain and Portugal to a list of high-risk countries, with incoming travelers asked to fill out a form and upload proof of vaccination or negative test result.

China placed the city of Xi'an and its 13 million residents under lockdown on Thursday, following a recent surge in cases. The city is 1,000 kilometers away from Beijing, which is due to host the Winter Olympics in a few weeks.

As per the rules in Xi'an, only one person per household can leave the house every two days to buy necessities, while nonessential businesses are closed.

The lockdowns in those states, with a combined population of nearly 16 million people, are a stumbling block along the country's plans to reopen permanently after strict lockdowns for the past two years.

Australia reported more than 8,200 new cases on Thursday, by far its biggest daily rise since the pandemic began.

A record number of 109 people died in South Korea in the last 24 hours, as officials warned that the omicron could soon become the dominant strain.

The country has been grappling with a rise in infections and deaths as it eased restrictions in November in an effort to return to normalcy.

Authorities in Japan said they are not considering any changes to current restrictions as of now, a day after community transmission of the omicron variant was detected in the country.

"Now that the omicron strain has been confirmed as a community-acquired infection, there are concerns that it may spread further, so please be cautious when holding year-end or New Year's parties," Shigeru Omi, the nation's top health advisor, said at a press conference.

California Governor Gavin Newsom said the state's 2.5 million health care workers had until February 1 to get a vaccine booster shot. If they failed to do so, they could lose their jobs, he added.

California was the first state to require health care workers to be vaccinated.

In Greece, Christmas concerts and other events have been canceled as part of new restrictions that include a mask requirement outdoors and in all public areas.

Incoming travelers must also take COVID-19 tests on the second and fourth days after they arrive.

"Due to the large amount of Christmas activity and crowded conditions that it creates, the mandatory use of masks is fully justified,'' Health Minister Thanos Plevris said during a live-streamed presentation of the measures.

In France, President Emmanuel Macron on Thursday wished the nation a happy Christmas season — but warned people to take precautions to avoid catching the coronavirus.

"Let's take care of each other," he wrote in a tweet, calling on people to observe social-distancing guidance and take an at-home test before attending gatherings.

France has seen a dramatic rise in COVID-19 infections in recent weeks. Most recently, the seven-day average of cases per 100,000 people stood at about 550.

Denmark and Sweden will require tests from incoming all incoming travelers starting later this month, with the rule also applying to vaccinated people.

Italy is expected to introduce new restrictions, such as making outdoor mask-wearing compulsory. Rome is also looking closing down clubs and discos until New Year's Eve.

Italy may also reduce the validity of its COVID-19 health pass from nine months to six months.

Morocco has extended its nationwide health state of emergency until January 31. The move allows the Moroccan government to impose measures such as restrictions and curfews as needed to curb the spread of the virus.

Citing an Oxford University study, AstraZeneca said a third dose of its vaccine could provide protection from the omicron variant. The study is yet to be published by a peer-reviewed medical journal.

The study on AstraZeneca's vaccine, Vaxzevria, showed that after a three-dose course, neutralizing levels against omicron were similar to those against the delta variant after two doses.

A South African study says chances of severe illness and hospitalization due to infection with the omicron variant were low compared to the delta variant. The authors of the study said this was likely because of mass immunity that is now present in the population.

Yet the Africa Centres for Disease Control (CDC) says the data from the South African study can not be extrapolated to all countries, noting that South Africa has a young population.

"We should interpret the data from South Africa with a lot of caution," Africa CDC director John Nkengasong said.

Research by Imperial College London also said that the risk of hospitalization with the omicron variant is 40% to 45% lower compared to delta.

Vaccine justice – why is it so important?