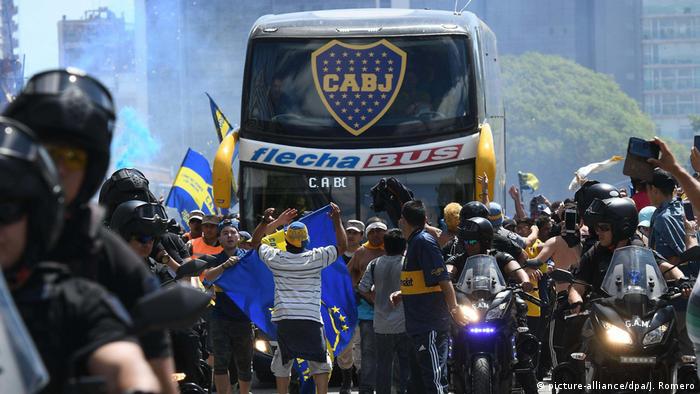 The second leg of the Copa Libertadores final in Argentina has been postponed to Sunday after River Plate fans attacked and injured Boca Juniors players hours before kickoff.

The head of the South American Football Confederation (CONMEBOL), Alejandro Dominguez, announced the delay after meeting with the directors of both clubs and FIFA President Gianni Infantino.

"This is football, not war," Dominguez said. "Neither team wants to play because this match would be unnatural."

Some Boca players had arm and eye injuries and others complained of breathing difficulties after tear gas and pepper spray used by police to stop the attack wafted in through shattered windows.

"They attacked us from everywhere," said Boca captain Pablo Perez.

The game was initially delayed by an hour and then another two hours before it was finally postponed to Sunday.

CONMEBOL doctors had said there was no reason to suspend the match from a "medical point of view." But Dominguez said both clubs came to a "gentleman's agreement" after separately requesting the game's postponement.

The first leg of the "superclasico" ended 2-2 three weeks ago.

It's the first time the rival Argentinian teams have met in the Copa Libertadores final, South America's equivalent to Europe's Champions League final.

Two of Argentina's biggest football clubs have been named in child abuse allegations made by a local NGO. Former youth players from River Plate and Independiente have reported a child prostitution ring. (05.04.2018)

Football is worshiped by millions in Germany, and some of the sport's more passionate followers have a reputation for stirring up trouble. Still, Germany has found a way to embrace true fans and push against hooligans. (10.11.2016)