The first three games of the World Cup in Brazil had one thing in common - controversial refereeing decisions that cost, or awarded one side a goal. Croatia's coach called it "a shame." 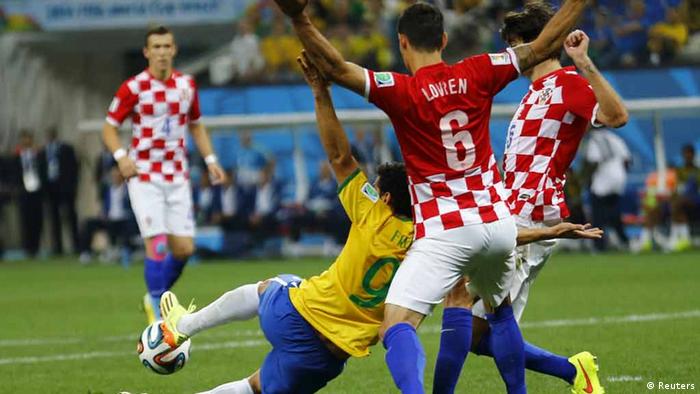 Following Croatia's 3-1 defeat to hosts Brazil on the opening night of the World Cup, Croatia coach Niko Kovac's vitriol was directed at one person - the referee. The Brazilians were controversially awarded a penalty after conceding an own goal early on, while star striker Neymar was lucky to escape a red card for a high elbow.

Kovac called the decision by Japanese referee Yuichi Nishimura "ridiculous," saying the World Cup would be a "circus" if such officiating persisted.

The divisive call came when Fred went down in the box, after Croatia's Dejan Lovran appeared to put his arms on the Brazilian striker's shoulders. 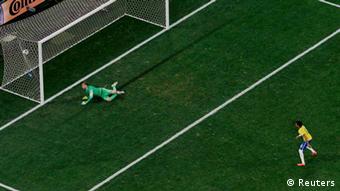 "If that's a penalty, we don't need to play football anymore. Let's play basketball instead, it's a shame," said Kovac. "If you continue in this vein then there will be 100 penalties during this World Cup."

Lovran, who Nishimura judged to have been at fault for the penalty, was even more incensed, saying the referee "didn't deserve to be here."

"Two billion people I think saw that it was not a penalty. I didn't touch him," he said. "We're really disappointed but what can you do against 12 players? You can't do anything."

"I'm sad, that's it, because we played a good match and the referee - it wasn't a mistake, it was a scandal. It's a scandal for everyone, it's a scandal for FIFA. I think this referee shouldn't be at this World Cup," Lovran added.

Perhaps even more shocking was the decision by Italian referee Niccola Rizzoli to award Spain a penalty in their World Cup opener against the Netherlands. Near the half hour mark, Dutch defender Stefan de Vrij slid into the box and appeared to clip Diego Costa's heel while going for the tackle. But replays showed a different picture, with Costa clearly play acting. 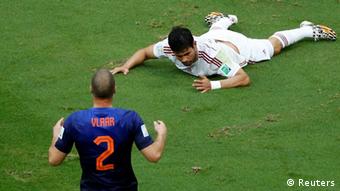 The penalty stood regardless, and Xabi Alonso converted. It might have been a bigger story than the injustice experienced by Croatia had the Netherlands not gone on to turn the match around and win 5-1.

Mexico were unlucky not to have had two more goals in their 1-0 win over Cameroon in a rainy match in Natal. Attacker Giovanni Dos Santos had two goals disallowed for offside calls by Colombian official Wilmar Alexander Roldan Perez.

While the first decision could've gone either way, the second was a clear mistake. Dos Santos finished off a corner at the far post that had been flicked on by Cameroon's Eric-Maxim Choupo-Moting. The referee though, thought another Mexico player had touched the ball, and erroneously ruled the goal offside.

"We could have scored more, but unfortunately we're not used to these conditions," said head coach Miguel Herrera. "Frankly, the refereeing took away two clear goals, but at the end of the day you've got to work for it, and we get to the next match with three points and very high spirits." 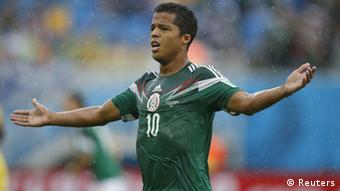 Afterwards, Herrera warned that his team "wasn't thinking of the referee," and that "people make mistakes."

Mistakes they were. The World Cup's fourth match - Australia's 3-1 loss to Chile - also had its share of disallowed goals, but fortunately lacked the glaring controversy of the first three games.

In Uruguay's shock defeat to Costa Rica, there was an obvious handball by Uruguay captain Diego Lugano - an observation missed by German referee Felix Brych.

Amidst a number of poor decisions, American referee Mark Geiger's refereeing performance in Colombia's comfortable win over Greece was refreshingly good. Geiger controlled the game throughout and was showered with positive praise afterwards.

FIFA has taken steps to make sure the officiating in Brazil is top notch - introducing goal line technology for the first time ever at the world's biggest sporting event - but with such major blunders, one must hope the officiating thus far proves to be an anomaly, rather than the norm.

Referee Felix Brych is due to officiate his first World Cup game on Saturday, when Uruguay take on Costa Rica. The German will hope he doesn't have to deal with a ghost goal, like last season in the Bundesliga. (14.06.2014)