The 32-year-old Dublin native was forced to retire after falling on his ankle at the end of the first round against Poirier. It was the third, much-hyped meeting between the two fighters. 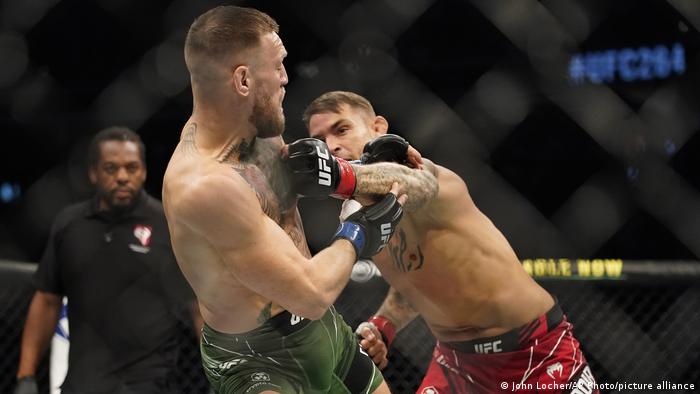 McGregor was forced to retire hurt with a broken leg

The Irish superstar retired hurt with a broken leg in the final seconds of the first round after being put to the ground by a kick from Poirier.

The Louisiana-based fighter had been in control through the first five minutes of the bout, blocking McGregor's kicks and landing several strikes before grappling with the 32-year-old.

Poirier landed a series of punches and elbows on his opponent before knocking him down.

The Dublin native's ankle was visibly bent as he fell.

What is the extent of McGregor's injury?

Medics were immediately called into the octagon to assess McGregor's condition.

When it was clear that he could not continue, referee Herb Dean declared a stop to the bout on the instructions of the doctor.

Poirier, also 32, claimed that his opponent's leg was broken prior to him falling to the ground. 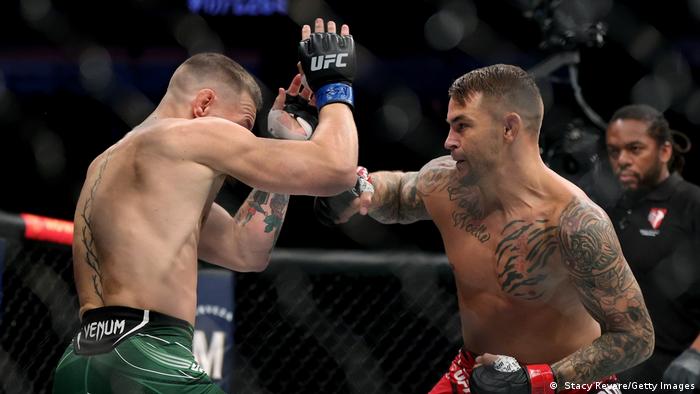 Poirier claimed he had broken his opponent's leg with one of his kicks.

"I felt something, for sure,'' he said. "He fractured it on one of the kicks at the beginning of the fight, and then he broke it.''

The Irishman was then carried out of the octagon on a stretcher to receive treatment at a local Las Vegas hospital.

UFC president Dana White later said that McGregor had broken "the lower tibia in his left shin," and was expected to undergo surgery.

What is next for McGregor?

The much-hyped fight was the third meeting between the pair after American Poirier avenged his 2014 loss back in January. 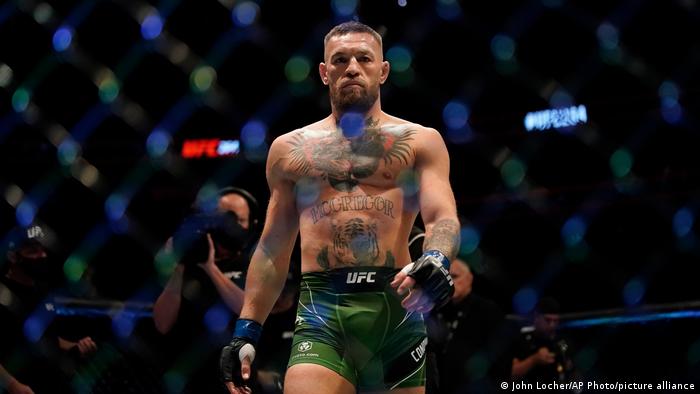 McGregor had been eyeing a return to boxing, but questions remain about whether he has a long-term future in UFC

McGregor had been eyeing a boxing fight against Manny Pacquiao at the time, but the Filipino's interest has cooled in the months following McGregor's previous defeat in Abu Dhabi.

The 32-year-old Irishman lost to Floyd Mayweather in a similar bout back in 2017.

Some commentators were already speculating on Sunday whether this latest loss could spell the end of McGregor's UFC career.

But UFC boss Dana White moved to downplay claims that he might retire, suggesting that another rematch between the two men could still happen.

"It sucks, it's brutal, it's not the way you want to see fights end. Dustin Poirier will fight for the title and when Conor is healed and ready to go, you do the rematch, I guess," he told a news conference.

Why is McGregor famous?

Known for his aggressive public persona outside the ring, McGregor beat Jose Aldo for the UFC featherweight title in 2015 in just 13 seconds, which is the fastest victory in UFC title fight history.

He then claimed the lightweight title in a 2016 fight against American Eddie Alvarez, becoming the first UFC fighter to hold titles in two weight divisions simultaneously.

But McGregor lost his lightweight belt to Russian national Khabib Nurmagomedov in 2018.

Nurmagomedov, who is now retired and was once a bitter rival of McGregor, took to Twitter to congratulate Poirier on his victory, writing that "good always defeats evil."

The pair clashed on the social media site in 2019 after the Irishman made a racial slur about Nurmagomedov's wife; the couple are both observant Muslims.

The latest fight against Poirer was only the fourth time McGregor's has competed in mixed martial arts in almost five years since winning the title.

What was Poirier's reaction?

Although less famous, Poirier has been more successful than his Irish rival in recent years, marking only one significant loss — against Nurmagomedov in 2019.

Following the match on Sunday, Poirier said McGregor's defeat was "karma," pointing to McGregor's verbal threats against himself and insults against his wife.

"This guy was saying he was going to murder me and kill me. I am going to leave here in a coffin," said Poirier. "
Murder is something you don't clown around with. I hope this guy gets home safe to his beautiful family."

"This guy is a dirt bag," Poirier said. "Sometimes these things happen."