Under pressure from his Conservatives, Prime Minister David Cameron has brought forward a draft motion pledging a UK referendum on EU membership. The bill would only count in 2017 and only if Cameron wins re-election. 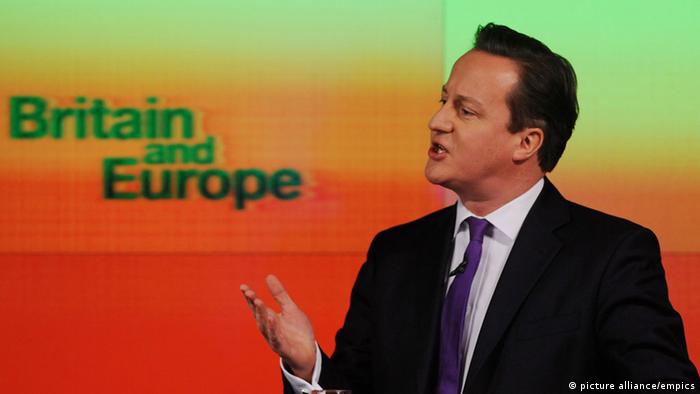 The ruling Conservative Party on Tuesday published a draft bill outlining its plans for an "in/out" referendum on EU membership after Britain's next general election, if the Tories win again.

"Do you think that the United Kingdom should remain a member of the European Union?" is the proposed question that could be put to British voters four years from now.

Cameron first announced his plans for a referendum in a speech this January where he said he would first seek alterations to the bloc's treaties to make it function better. The prime minister says he favors continued EU membership, albeit with revisions, a position that puts him at odds with a sizeable faction within his own party.

The bill is very unlikely to pass, owing to opposition from some conservatives, the opposition Labour Party and Cameron's junior coalition partners, the Liberal Democrats. Because of Liberal Democrat opposition, the paper has not been put forward as a government proposal, meaning it will have to take an unusual route to the debating floor via an individual Tory MP filing a private members' bill.

Threat of a fractured right

Cameron defended the decision on a string of British news channels from Washington, as fallout from recent municipal elections followed him across the Atlantic.

"I think when all the dust has settled people will be able to see the substance of the issue," Cameron told Sky News. "That is that one party, the Conservatives, has a clear agenda: renegotiate, change Europe, have a referendum on it - the other parties don't take that approach."

US President Barack Obama had made his first comments on the issue during Cameron's visit, seemingly siding with a policy of alteration not cancellation.

"I will say this, that David's basic point that you probably want to see if your can fix what's broken in a very important relationship before you break it off makes some sense to me," Obama said on the matter.

As well as the fissures within his own party, Cameron's Conservatives face growing opposition from the United Kingdom Independence Party (UKIP), a group centered around a demand to exit the EU. UKIP secured around one quarter of the vote in the wards where it stood in local elections this month, gaining 16 seats in the Lincolnshire county council and costing the Tories their majority in the council.

The Conservatives used to be the only serious right-of-center player in British politics, and the prospect of UKIP taking a slice of its vote is a cause for Tory concern.

Britain's next general election is currently scheduled for May 7, 2015, but could take place earlier in exceptional circumstances.

The back benches have been restless over the European issue in recent weeks, with another parliamentary bill up for discussion targeting the Queen's symbolic speech to open parliament. Supporters of the motion say the issue of EU treaty renegotiation or a referendum should have been included in the Queen's brief overview of parliament's agenda for the year.

Cameron said that while he had asked his cabinet members to either abstain or reject the motion suggesting an addition to the speech's transcript, other Conservatives could vote as they pleased.