An investigative committee in the German parliament is aiming to explain why the Euro Hawk drone, after years in the making and investments of more than 600 million euros, can't receive flight permission. 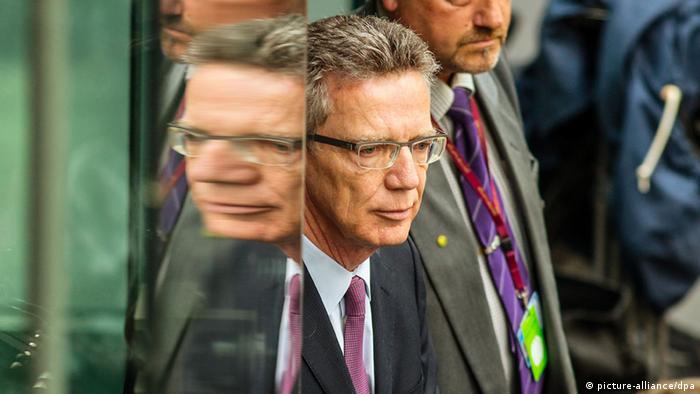 If you ask someone to explain the role of parliamentary investigative committees in Germany, expect to hear some martial arts language. These committees are often called "the opposition's sharpest swords" because opposition parties are able to push through such committees with just a quarter of the votes in parliament and can flex their muscles in public.

And it so happens that a battle is already underway in Germany - namely, the battle for federal elections in September. That explains why the investigative committee looking into the Euro Hawk drone issue is meeting regularly despite the parliamentary summer break – eight sessions in one month, to be exact. The opposition's aim is to weaken the standing of Defense Minister Thomas de Maizière as much as possible and to put government parties on the defensive. 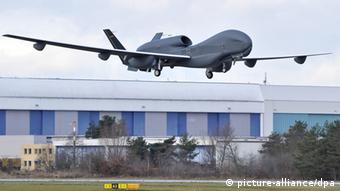 The Euro Hawk turned out to be a money sink

In a sense, an investigative committee is like a court case. Evidence needs to be collected and witnesses interviewed. In the committee looking into the drone issue, a point that needs an explanation is why the development of the unmanned Euro Hawk drone was stopped in May. At the time, it was clear that permission for the drone to take up regular flight operations was not realistic in the foreseeable future – after 600 million euros ($800 million) had already been invested.

There is no official defendant, but there is an issue of central interest to the investigative committee: the responsibility of the Defense Minister de Maizière, a member of the Christian Democratic Union (CDU) and a close confidant of Chancellor Angela Merkel. If found guilty, he could put the entire government in a tight spot.

As in court, there are prosecution witnesses or people whom the opposition would like to cross-examine, and then there are defense witnesses whom de Maizière's party allies believe could help the minister. The biggest coup for the government camp would be to pin blame on a former defense minster from the opposition.

In that case, a likely candidate would be Rudolf Scharping, a member of the Social Democratic Party (SPD) who served as defense minister from 1998 to 2002. "The SPD and the Greens kicked off the Euro Hawk, making important decisions while they had the majority," said Thomas Grübel, a CDU representative in the investigative committee. Scharping was invited to comment on his involvement at the beginning of the investigation. If the government parties had been able to prove that the project was Sharping's "birth defect," they could have taken the heat off de Maizière.

But Scharping had an answer. "You can't be in office for several years and then discover a birth defect," the former defense minster said of his successor. And Scharping also disagreed with de Maizière's argument that that the minister wasn't adequately informed by his staff. "You have to ask questions," Scharping said, adding that he was always successful in getting answers, whether on business trips or over a "glass of red wine."

Wolfgang Schneiderhahn, a longtime inspector general, also refused to accept de Maizière's statement that defense ministers have “traditionally” been poorly informed by staff. "If something was burning under my fingernails, then I got my time to speak with the minster,” he said.

The opposition stepped up its pressure on the defense minister early into the meetings. "De Maizière is the problem bear of this government," said Green parliamentarian Omid Nouripour after the second session. 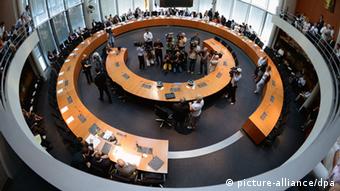 The opposition's key witness is Angelika Bauch. She is an examiner with the German Federal Court of Auditors and, in her role as financial controller, examined the ministry's operations. She told the investigative committee that the defense industry had a naive trust in the industry and that problems weren't spotted and risks underestimated. "The checks didn't function," Bauch said. Asked about de Maizière specifically, she said the minster failed his duty to seek information.

But de Maizière's close ministerial aides have helped take some of the pressure off the minister. State Secretary Stéphane Beemelmans admitted to not providing the minister with timely information about problems with the drone project. "I take full responsibility," he said.

Harald Stein, president of the agency responsible for procuring equipment for the German armed forces, said the minister chose the right time to exit the project. It was important, he said, to complete the Euro Hawk test phase.

A reconnaissance unit, according to Stein, was built especially for the Euro Hawk, which is identical to a drone used by the US Army. This system, which can take pictures from the air, consumed more than half the budget. But it works, Stein noted, and can be used in other aircraft. "If we had dropped out of the program sooner, we would have had nothing," he said.

In the end, de Maizière will need to face the investigative commission himself. It will be the showdown, the most important event in the process. Whether or not the minister in the end will be pinned down as the culprit will depend largely on his performance at the meeting.

But that's where the parallels to a court case end. The committee submits a final report but can make no decision over consequences. Only the minister can do that or his boss, Angela Merkel, who has made it clear that she fully supports her defense minister.

The German parliament has taken on the task of conducting a rapid-fire investigation into the Euro Hawk drone debacle. With elections looming, the defense minister's testimony could prove politically explosive. (22.07.2013)