Surgeons in Arauca, in the eastern part of the country, have taken out a live grenade lodged in a soldier's face. But the man will need extensive reconstructive surgery. 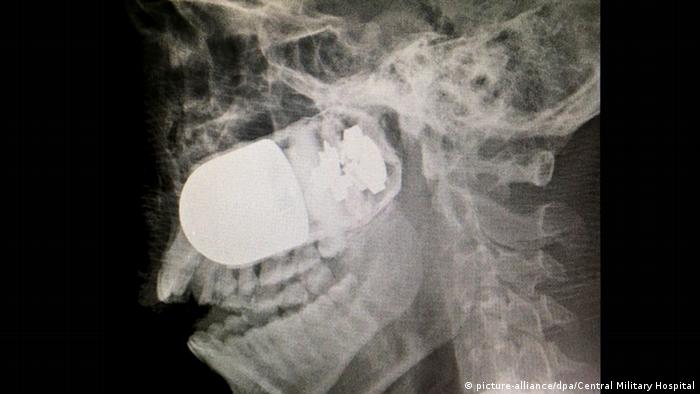 An X-ray shows the grenade lodged in the soldier's face

The soldier, Leandro Jose Luna, was patrolling in Arauca, when his colleague accidentally fired a grenade launcher and the projectile lodged itself in Luna's head.

Taking him by helicopter was too dangerous, so an ambulance transported the soldier to the capital, Bogota, a journey of eight hours.

Doctors in the capital built an improvised operation theater in a car park because of the danger of the grenade exploding. But they managed to remove the weapon.

"Five minutes were decisive," the soldier's surgeon William Sanchez Maldonaldo told reporters. "If the grenade had exploded, there would have been a tragedy."

Meanwhile, the soldier's condition was described as stable, but doctors said he would need several rounds of surgery to get his face back to normal shape.

A grenade is defined as a small missile that contains an explosive or a chemical agent (tear gas, a flame or smoke producer). It can be thrown by hand or fired from a rifle or a launcher.

World's most complex face transplant performed on volunteer US firefighter

A medical center in New York says it successfully performed the world's most extensive face transplant in August on a volunteer firefighter. (17.11.2015)

Doctors in Switzerland say they have successfully carried out an operation to separate eight-day-old conjoined twins. The sisters are believed to be the youngest patients to have undergone such a procedure. (31.01.2016)

The benefits and risks of artificial joints

Dr. Thilo John tells us what to take into account, if we're planning to have an artificial joint. He works at a certified center for joint replacement surgery where only durable articifical joints are implanted. (02.06.2016)