Doctors in Switzerland say they have successfully carried out an operation to separate eight-day-old conjoined twins. The sisters are believed to be the youngest patients to have undergone such a procedure. 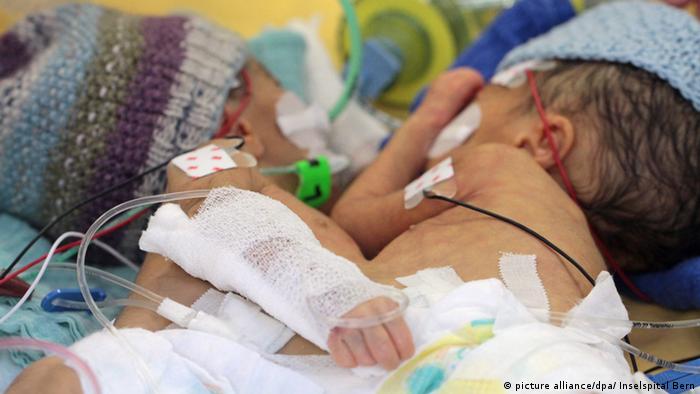 The girls were born two months premature and joined at the chest and liver. The two also have a triplet sister, Kamilla, who was born healthy.

Doctors had planned to separate the girls a few months after birth, but after just one week the babies' situation began to deteriorate. Both developed life-threatening complications caused by the joined liver, forcing the doctors to attempt surgery.

"We were prepared for the death of both babies, it was so extreme," Barbara Wildhaber, who led the team that carried out the surgery, told Swiss paper "Le Matin Dimanche."

Five surgeons, supported by a team of nurses and anesthesiologists, carried out the procedure on the girls on December 10. At the time, the babies weighed a total of 2.2 kilograms (4.8 pounds). According to Swiss media, it was the first time the surgery had been attempted on such young infants.

"It was magnificent! I will remember it my entire career," Wildhaber said.

Since their surgery, Maya and Lydia have put on weight and are recovering well, "Le Matin Dimanche" reported.

The pair is among only about 200 separated conjoined twins currently alive around the globe, it said.

A family in Cameroon is asking for assistance to transfer their conjoined twins to the US for specialized surgery. So-called Siamese twins are considered evil in rural Cameroon and some of them end up being killed. (07.05.2015)

World's most complex face transplant performed on volunteer US firefighter

A medical center in New York says it successfully performed the world's most extensive face transplant in August on a volunteer firefighter. (17.11.2015)

Testing for Down syndrome remains controversial in Germany

In recent years, blood tests for Down syndrome have been introduced, but they are still controversial in Germany. And the decision whether or not to terminate a pregnancy remains a tough one. A family tells their story. (17.11.2015)