As the Colombian military is deployed to quell an ongoing anti-government protest movement, Human Rights Watch told DW that security forces have a "poor record" on the judicious use of force. 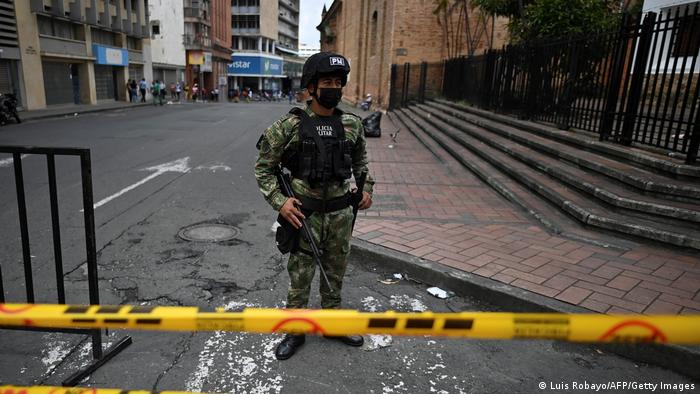 Human Rights Watch (HRW) has warned the military deployment to counter ongoing protests in Colombia could increase "unrest and human rights violations" in the country.

The protests began earlier in May as opposition to a now-rescinded tax reform proposal,but have since expanded into a larger mobilization against the government of President Ivan Duque.

President Duque has ordered nearly 7,000 soldiers to support the local police forces and help clear and patrol blockaded roads in 10 departments across the country.

Around 1,400 of these troops have been deployed to Cali, a city in the western province of Valle del Cauca, and the epicenter of the nationwide protests. President Duque has been in Cali since Friday.

Cali Mayor Jorge Ivan Ospina said that 13 people were killed in Cali on Friday, and Colombian officials say at least 59 people have been killed since the protests began earlier this month.

Jose Miguel Vivanco , HRW's executive director for the Americas, told DW that the situation in Cali could deteriorate further as the military cracks down on the protests. HRW has put the death toll from the protests at 63, citing "credible reports" that it is higher than the official version.

Colombian security forces have "a very poor record with regard to the use of force," Vivanco said.

"We are collecting credible information that shows the use of firearms, live ammunition against demonstrators by members of the security forces as well as civilians who are working together with security forces in different locations in the country," he added

Dialogue needed between protesters and government

Vivanco said Colombia's security crisis is wrapped up in complex political, social and economic issues. Across the country, poverty and the coronavirus pandemic have unleashed widespread anger against the government. Deescalation, said Vivanco, therefore requires more than brute force.

"The solution to this problem is a political one, not a military or a police one," Vivanco said. "That means to initiate a credible process of dialogue with multiple forces who are demonstrating on the streets across the country to create a space to build some trust with the leaders of the opposition," he added.