Former Colombian rebels attended Congress for the first time under a 2016 peace accord that allocates their party 10 seats. The peace deal has divided Colombia, with some saying it is too soft on the former rebels. 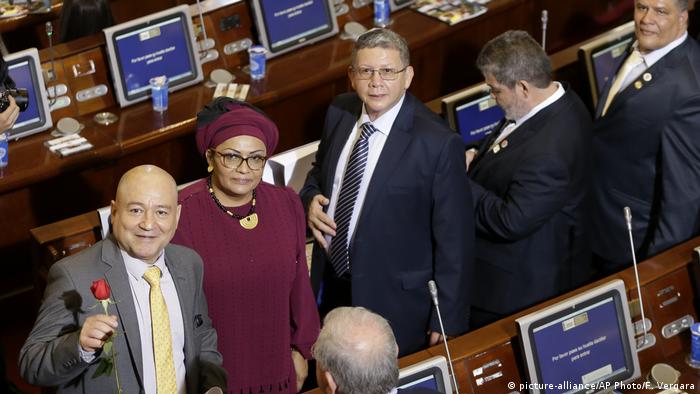 Ex-rebels from Colombia's former leftist guerrilla movement the Revolutionary Armed Forces of Colombia (FARC) took their seats in the country's new Congress on Friday, as it held its first session.

Outgoing President Jose Manuel Santos presided over a ceremony in which all new lawmakers elected in the May elections took up their seats, welcoming them to "this temple of democracy."

Read more: Colombia's peace deal: Where is the peace?

"Here they are, for the first time, five senators and five representatives of Common Alternative Revolutionary Force, born of the demobilization and disarmament of the FARC," Santos said, alluding to the name of the FARC political party, which has the same acronym in Spanish as the rebel army.

Under a 2016 peace accord that ended a 50-year civil war and saw Santos awarded the Nobel Peace Prize, five seats in both the upper and lower chambers have been set aside for members of the FARC, despite the political party only winning 1 percent of votes.

Only eight of the former rebels took their seats on Friday, with one of the FARC senators, Seuxis Hernandez alias Jesus Santrich, unable to take his seat because the US is seeking his extradition over charges of drug trafficking.

Another FARC senator, Luciano Marin alias Ivan Marquez, renounced his seat in protest against the "judicial hoax" that he said had been run against Santrich by the government and the United States. Marquez's seat was given to Israel Zuniga, alias Benkos Bioho.

The peace accord has caused a rift in Colombia, with conservatives saying it goes too easy on the former rebels.

In the May election Santos, who was not allowed seek another term, was succeeded by right-wing politician Ivan Duque,  who has vowed to amend the accord, calling it too lenient. He is due to take office on August 7.

"Many won't like seeing FARC members at this scene," but "it fills me with satisfaction" because people "who fought the state and its institutions with weapons for half a century ... submit to Colombian laws," said Santos.

The leader of Duque's Democratic Center party, former President Alvaro Uribe, has been a tough critic of the outgoing president and the peace accord.

"Congress with people convicted of atrocious crimes, without paying reparations, without fulfilling symbolic sanctions," Uribe said in a tweet posted as Santos was speaking.

"In Colombia, growing crime and criminal reorganization of FARC. Peace in appearance only," he added.

The peace accord was agreed on following four years of negotiations in Cuba. The FARC were Latin America's last major rebel group.

The peace deal saw the demobilization of about 7,000 of its fighters, but some 1,200 dissidents from the group, as well as the smaller rebel force National Liberation Army and criminal groups continue to be active in the countryside.

Colombian guerrilla group the ELN and the country's armed forces have begun a ceasefire after five decades of violence. The truce is the result of ongoing peace talks with the government. (01.10.2017)

Colombians need to participate in a reconciliation process after years of conflict, Pope Francis told a million believers at a Mass in Medellin. Jesus' way of life calls for a path of love and non-violence, he said. (10.09.2017)

Colombia: What impact will the historic ceasefire have on the media?

Latin America's longest-running armed conflict has effectively come to an end. The goal now is to prepare Colombians for a post-war era. DW Akademie is supporting local media in areas most affected by the conflict. (29.06.2016)