Alberto Carrasquilla has resigned a day after Colombia's president withdrew a controversial tax reform proposal. Protests against the bill have left at least 19 dead. 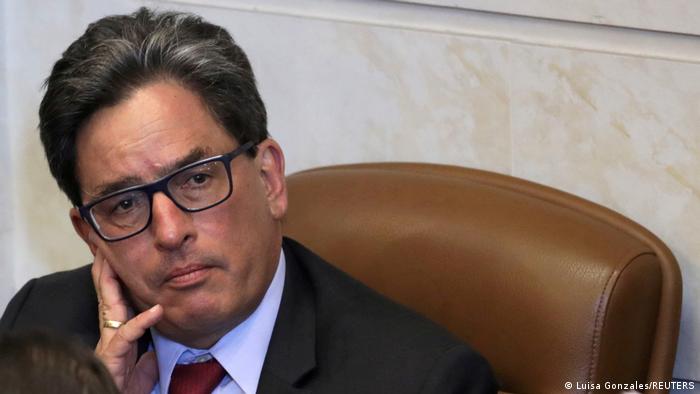 Colombian Finance Minister Alberto Carrasquilla resigned on Monday after multiple days of protests over a tax reform proposal that left at least 19 dead.

"I have accepted the resignation of Dr. Alberto Carrasquilla," President Ivan Duque said on Twitter. He also expressed his "gratitude and respect" for the minister’s contribution at the helm of his economic team.

Duque's government introduced the bill on April 15 in the hopes of financing public spending and revamping the economy. The proposed tax plan was met with widespread protests, including riots and violent clashes with police.

More than 800 were wounded in clashes during five days of demonstrations. Authorities also detained 431 people, with the military being deployed in the worst-affected cities. Some NGOs have also accused the police of firing at civilians.

Defense Minister Diego Molano said the violence was "premeditated, organized, financed by FARC dissidents" and members of the ELN, referring to leftist rebels who signed a deal with the government in 2016 and the country’s last operational guerrilla group.

In a televised statement, Duque said his government would create new proposals and seek consensus with other parties and organizations.

Notably, Duque said the government would abandon an increase in VAT on goods and services, and an expansion of the taxpayer base.

Reporter - Colombia: An Airlift against COVID-19

The leader had previously said tax rises were necessary to overcome Colombia's public finance gaps generated by the pandemic.

The Latin American country has seen its worst recession in half a century, with its GDP dropping 6.8% in 2020 compared to the previous year.

Protesters said the tax changes, including an expansion of income tax, would make them poorer amid the pandemic.