Long controversial for his use of plastinated corpses in exhibits, Gunther von Hagens is now under fire for using them to show what he says is a natural part of the human condition - sex. 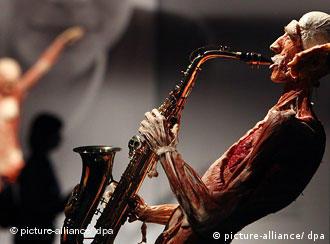 Cologne says "Body Worlds" has gone too far in its latest attempt to be true to life.

Cologne is the latest city to put restrictions on a traveling exhibition that depicts preserved bodies positioned as though they are having sexual intercourse.

Cologne's Health and Safety Department has barred the "Body Worlds: Cycle of Life" exhibition, which opens Saturday, from including the controversial works or showing them in videos or photographs. It also stipulates that visitors under 16 must be accompanied by an adult.

On Friday, "Body Worlds" creator, Gunther von Hagens called the ban inexplicable. He said it indicated "a pathetic, poor understanding of democracy" and accused city authorities of imposing their will upon the people.

The work includes four "consenting donors," and von Hagens has said that their depiction is intended to give "a deep understanding of the human body, the biology of reproduction, and the nature of sexuality."

The exhibit has faced particular criticism from the city's religious community. The Catholic Church has condemned it as a desecration of the human body. 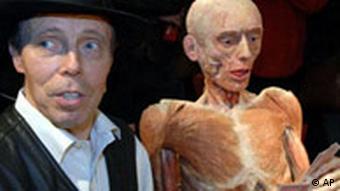 "They are literally displayed as objects," said Christoph Heckeley, a spokesman for Cologne's archbishop, Cardinal Joachim Meisner. "By doing so, voyeurism is given a veneer of scientific interest."

The Association of Protestant Churches for the Cologne area said in a statement that von Hagens' work takes the human body, "severs it from its soul, and turns it into something for show-and-tell."

This isn't the first time that von Hagens' latest creations have faced controversy. The copulating corpses were also banned in Augsburg and Zürich. And "Body Worlds" has had to defend itself from past allegations that it may have used the corpses of executed prisoners from China for its exhibits. Von Hagen has maintained that all of his specimens came from people who voluntarily donated their bodies for educational and scientific purposes.

The bodies are preserved using a process, designed by von Hagens, in which a synthetic polymer replaces the fats and fluids in the human body.

A struggling eastern German town is now home to the "Plastinarium," a workshop set up by the controversial anatomist behind the "Body World" exhibitions, where dissected human corpses were displayed in lifelike poses. (20.11.2006)

A controversial German artist who works with cadavers faces new controversy after trying to expand to Poland, where his father, who leads the project, allegedly served with the SS. (15.03.2005)