For a long time, German authorities turned a blind eye to neo-Nazi assaults – but not anymore. The Freital group is being tried for terrorism and could act as a precedent for such trials. 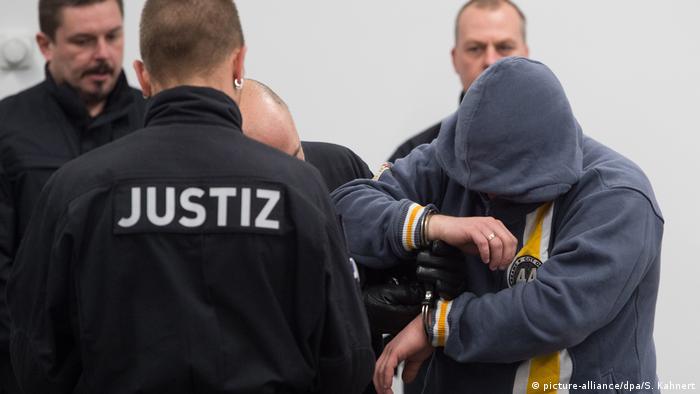 Defendant Mike S. is brought to a Dresden regional court hearing by bailiffs

Nearly three years ago, a now 19-year-old man named "Romeo" fled to Germany from Ghana as an unaccompanied minor. Ines Kummer took him under her wing. Ever since then, he has been calling her "mommy." The 54-year-old member of Freital's city council, in the Eastern German state of Saxony, talks to Romeo on a regular basis. But now, the communication is limited to phone conversations as Romeo left Freital – involuntarily. Since autumn, he has been living five hundred kilometers away in the city of Rheine in the western German state of North Rhine–Westphalia. He was evacuated from his shelter as black Africans were often the target of attacks, says Ines Kummer. Neo-Nazis suddenly crashed a garden party at the shelter. The neo-Nazis took chalk and scrawled "everyone out" and "NS" [ed.: a German acronym for Nazis] on the street. It was then that Romeo knew that he had to leave Freital.

Timo S. was apparently one of the perpetrators. He and seven other right-wing extremists are now on trial in the regional court in Dresden, where they face charges of attempted murder, grievous bodily harm, carrying out bomb attacks and forming a terrorist organization. Timo S. is considered to be the group's leader. The 28-year-old bus driver has been living in Freital since 2014 and professes to be a right-wing extremist. In 2015, when the first refugees arrived and were put up in Hotel Leonardo in Freital, he led a self-described "civil defense" group. They met at the local "Aral" gas station every Friday night; there was nothing very conspiratorial. "Nothing was hidden," says Ines Kummer. "It was announced terror."

This is where they planned "who is next." They targeted refugee helpers and left-wing politicians. In the Czech Republic, they acquired explosives 130 times more powerful than the largest fireworks allowed in Germany. The group used the code name "fruit" for the explosives. In June 2015, they used baseball bats to smash a car. The passengers - two young people - were still inside.

One of them was Martin Dulig, the son of the Social Democratic (SPD) deputy premier of Saxony. Suddenly, public interest in the right-wing scene grew. The group kept a low profile for a while. Months later, Timo S. and his "civil defense" group stuck explosives on the windows of a refugee shelter. Federal prosecutors later deemed this to be an act of terror. Indeed, all these crimes could have exposed and made known much sooner; everyone in Freital knew what the neo-Nazis were up to. Only the police claim that they did not see or hear of any attacks.

The police, your friend and helper

Yet the police station is just across the street from the "Aral" gas station, the headquarters of Timo S. and his gang. When a refugee helper went to the police to ask for protection because her mailbox had been blown up, they told her they would never have time to do their work if everyone who felt threatened went to them with their problems. It is a refrain Ines Kummer often hears - she herself is the target of massive telephone threats. Anonymous callers don't mince words, leveling threats such as: "You'll end up in the gasser."

Recorded telephone calls suggest that Saxon police were aware of the plans and motives of the Freital plotters. The role of a secret witness who may have been an undercover investigator, however, has not yet been explained. All of these clues point to the fact that the police may have known much more about the terror cell.

The federal prosecutor's office deserves credit for the fact the Freital group's crimes are now being processed in a major trial. Federal prosecutors took control of the case to prevent Saxony's regional authorities from further disgracing themselves. The trial sends out a signal to the right-wing extremist scene, which has often been trivialized by local authorities. The 62 days set for the trial now include a third right-wing terrorist cell in Germany. A verdict has not been passed in the most well-known neo-Nazi trial for the NSU, the National Socialist Underground organization, which is being charged for ten counts of murder and 15 counts of robbery over several years. Legal and administrative failures have had a lasting, negative effect on this case. That is why the federal prosecutor's office has taken over the Freital group case and decided that the Freital group should be charged for forming a terrorist group.

The city, the terror and the silence

On April 19 when the special task force of the federal police known as the "GSG9" exposed the Freital group and arrested several of its members, the political parties in Freital's city council were busy arguing about who had known the longest about the neo-Nazi terror and had turned a blind eye to it.

According to Ines Kummer, there is a unique situation in the city of 40,000 inhabitants. She says, "There is a majority that cares about others and the minority is neo-Nazi." However, the problem lies in the people in between who choose to be silent. "They do nothing."

Eight German nationals have been formally charged with forming a far-right terrorist organization. They are also charged with carrying out five xenophobic or politically motivated attacks in Saxony. (15.11.2016)

For the first time in postwar Germany, the military and police have conducted joint counterterrorism exercises at home. Constitutional law expert Joachim Wieland explains why the Bundeswehr is seldom deployed in Germany. (10.03.2017)

German police are hunting for hundreds of neo-Nazis. The Interior Ministry says there was a significant jump in outstanding arrest warrants in 2016. Experts believe that right-wing terrorist networks pose a threat. (09.01.2017)