Zimbabwe now has two new deputy vice presidents, but their powers are limited. They were appointed by President Robert Mugabe after he had sacked vice president Joice Mujuru and ten ministers. 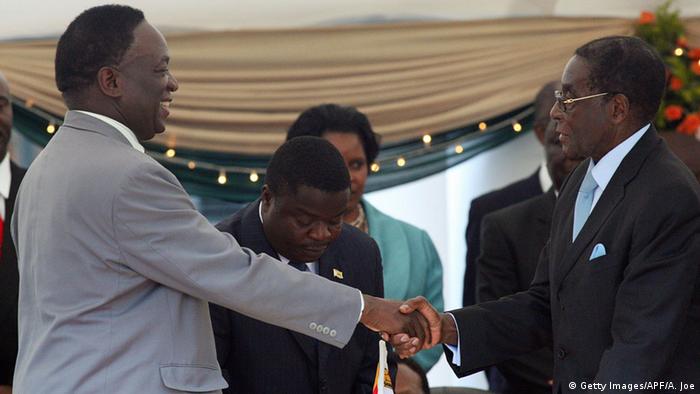 Zimbabwe's elderly leader, President Robert Mugabe, had postponed the announcement of a new deputy several times, prompting cartoonists to describe him as a "master of suspense."

On Wednesday (10.12.2014), Mugabe put an end to the speculation by naming Justice Minister Emmerson Mnangagwa as his deputy. The decision was hardly a surprise. The 68-year-old has been a close ally of Mugabe since the struggle for independence in the 1970s, and has been widely tipped as a successor to the 90-year leader.

"In Zimbabwe, the vice-president has never had a substantive role to play," Zimabwean author and economist Vincent Musewe told DW. "Mugabe is not somebody who likes to delegate - but given his age and the way he acts, it's about time he retired, so we are expecting that at least more work will be given to the younger Mnangagwa," he said.

Mnangagwa is well versed in economic issues and analysts believe that his appointment is part of the aging president's strategy to surround himself with politicians whose loyalty to him is beyond doubt. The second vice president will be Phelekezela Mphoko, a former Zimbabwean ambassador to South Africa. But this post is largely symbolic - even more so than the post of first vice president. The aim is to maintain parity between the various factions that were engaged in the struggle for independence. 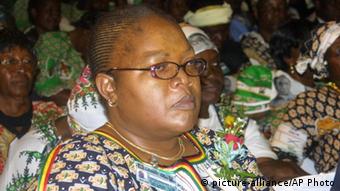 On Tuesday Mugabe fired vice president Joice Mujuru and ten ministers. According to the official explanation, Mujuru's "conduct in the discharge of her duties had become inconsistent with the expected standard." There were "conflicts between official responsibilities and private interests."

Mujuru, too, was once tipped as a possible successor to Mugabe, but her fortunes have been in steep decline in recent months. Grace Mugabe, the president's wife, accused her of being "incompetent" and of misappropriating public funds. The state media reported that Mujuru and her allies were engaged in a plot to assassinate the president and she was stopped from contesting a seat on the central committee of ZANU-PF, the ruling party.

Mujuru vehemently rejects the allegations and speaks of "a well-orchestrated smear campaign." On the day before her dismissal, she released a detailed statement to the Zimbabwean media. She described the allegations that she was involved in a plot to kill Mugabe as ridiculous. "As a law abiding citizen of Zimbabwe, I abhor the very notion that an elected president or government of the day can be removed from office through wrongful or unlawful means," she said. 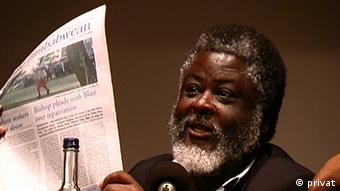 Wilf Mbanga suspects Mujuru could be put on trial shortly

Mujuru also said she was "bewildered" by the allegations of incompetence as she had spent the last ten years working as vice president.

Mnangagwa was tipped for the post of vice president back in 2004. But he faced accusations of plotting against Mugabe, similar to those now being hurled at Mujuru. As the years passed, Mnangagwa's star rose again and he returned to favor alongside Mujuru.

A rift has developed in ZANU-PF, splitting it between Mnangagwa's and Mujuru's respective supporters. Mugabe dismissed not only Mujuru, but also ministers loyal to her who were responsible for security, energy, and communications.

Wilf Mbanga, editor-in-chief of the newspaper The Zimbabwean, believes this does not augur well for ZANU-PF. "There was still the hope that Mugabe would not go to this extent, but would try to accoommodate that camp," he told DW. "I would not be surprised if she [Mujuru] was hauled before the courts and tried for all sorts of treason, corruption and so on," he added.

But Mnangagwa's future also harbors an element of doubt. ZANU-PF's candidate for presidency in 2018 is still Robert Mugabe. That was what the party congress decided last week. Whether - at the age of 95 - he will be a position to stand for election - is as yet unclear. But Musewe said Mugabe still has the power according to the constitution to nominate a successor for Zimbabwe who will not be elected. "So for all intents and purposes he could nominate Grace to succeed him and Mnangagwa stays a VP [vice president]. So there could have been a deal that Mnangagwa comes in now, but Grace must be elevated," he said.

Zimbabwean President Robert Mugabe has purged his one-time most likely successor, denouncing her at a party congress. The veteran leader is expected to nominate several loyalists, including his wife, to key positions. (05.12.2014)

Zimbabwe's main opposition party MDC-T is about to hold an elective congress. Party leader Morgan Tsvangirai, recently the target of an internal, abortive coup, has told DW he will be standing for re-election. (30.10.2014)