One day before the big military parade in Moscow, it is raining. Meteorologists have also predicted snow and rain for Tuesday. Nonetheless, the sun is likely to shine. How is that possible? 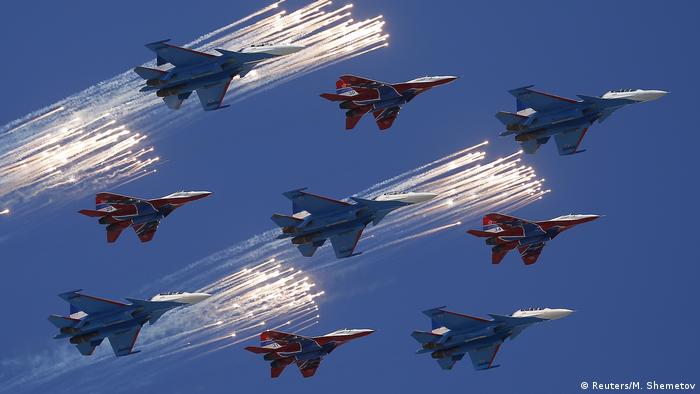 That's how the sky over Moscow looked at the rehearsal on Sunday. Was it purely left to chance?

On Tuesday May 9, Russia celebrates its victory over Nazi Germany with a large parade in Moscow. In recent years, it was always sunny, regardless of meteorological predictions.

The predictions for Tuesday aren't the best. Our Moscow correspondent reports that the weathermen have predicted continuous snow and rain. Nonetheless, he is expecting sunny weather - at least for the time of the parade.

It is known that the Russian airforce has repeatedly conducted so called cloud seeding in the past. The purpose of the exercise is to let the rain fall before it reaches the city center and to create a gap in the cloud cover for the time of the military parade.

During the rehearsal on Sunday, the skies opened up and the sun came out, our Moscow correspondent reports. The rain stopped just for the time necessary for the parade rehearsal. This suggests the technology is working well. But not everyone thinks that.

Meteorologists are disagreeing over theeffectiveness of cloud seeding. Published studies conclude that the possibility to influence the weather is rather limited.

No doubt, the effectiveness of cloud seeding depends to a large degree on the effort one puts into it. It seems clear, however, that even in the best case scenario the technology will have an effect merely in a limited local area, certainly.

Previous attempts to let it rain where rain was needed for agriculture have proven ineffective. Also, attempts to reduce the size of hailstones by triggering an early cloud burst have been marginal at best. 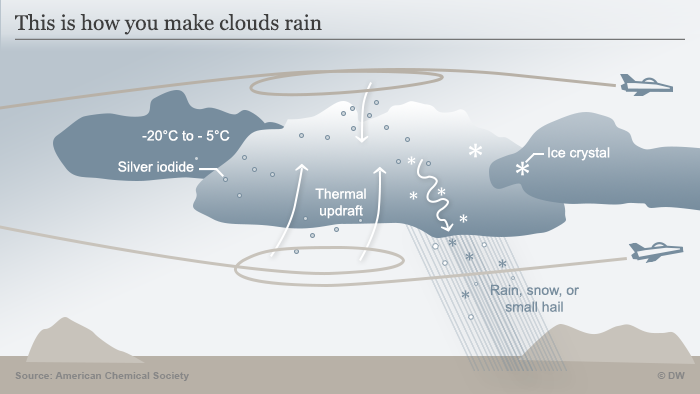 Silver iodide as a condensation nucleus

Regardless of whether the purpose is to make nice weather or to help agriculture avoid hail damage, the principle at work is the same: Artificial condensation nuclei are inserted into a storm cloud. Then vapor condenses at those nuclei creating tiny ice crystals.

Not only the Russian military uses the chemical. German winegrowers have experimented with silver iodide dissolved in acetone to prevent hail damage.

Most effective is spraying the solution from an airplane. The plane can either fly above or below the storm cloud. The droplets are so tiny that they will not fall back to the ground; applied under the cloud, the draft of the thermals will carry them up - right into the cloud.

There the water vapor will condense at the silver iodide particles and form ice crystals due to the low temperatures in the upper atmosphere. The tiny ice particles grow fast until they reach the size of small hailstones that can, when falling to the ground, turn into rain again.

No problem for the environment - no guarantee for the viewers

Spraying the atmosphere with silver iodide is usuallly not going to harm the environment. Despite being considered hazardous by the EU Dangerous Substances Directive, the amounts of silver iodide that will hit the ground will have been diluted to negligible levels, such that it will be difficult to detect the molecules.

However, spectators of the parade will only know afterwards whether it rained or not. Especially when talking about a small geographic space and a limited time frame, meteorologists find it almost impossible to make absolutely certain predictions.

In the final analysis, weather and currents are unpredictable.