The heat is on in Africa. Temperatures are rising, leading to droughts, floods and food insecurity. Find out what you can do against it! 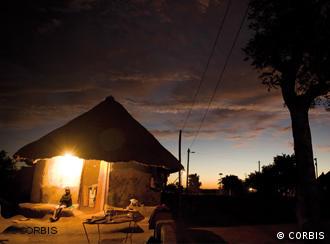 Africans consume little electricity compared to other parts of the world, but will be hit hard by climate change.

It isn't your fault, but you are going to suffer the effects. The African continent will be hardest hit by climate change, even though Europeans and Americans blow far more carbon dioxide into the atmosphere - the gas that is one of the causes of rising temperatures across the globe.

Yet Africa is particularly vulnerable, because the continent heavily depends on agriculture. Many regions of the continent already have to grapple with droughts, heatwaves and irregular rainy seasons that make it almost impossible to grow anything in the fields.

How can you join the people across the globe who are starting to fight climate change and what can you do in your own village or town? That's what Joshua, Carol, Lorna and Alex wonder about in Learning by Ear's radio drama about climate change. They are four teenagers who decide to take direct action when they hear that a new power plant is to be be built in their village. And, along the way, they learn some shocking facts about climate change.