Scattered scraggy palm trees blow in the sea breeze, and stone ruins rise from the sand, the last remnants of a village besieged by the sea. The coastal village of Fuveme, in Ghana's Volta region, could soon disappear — forever.

The small village in the Keta lagoon has already been transformed into an island, forcing many families to move inland.

Knowledge Dewornu stands stunned in front of his former house. The roof was torn away by sea floods. In November last year, huge waves from the Gulf of Guinea hit the thin sandbank where the last inhabitants of the village lived.

Dewornu is devastated by the sight of what used to be his home.

"This disaster is happening in all places along the coast, but it is most difficult here in Fuveme because we share the boundary with the Volta River," Dewornu told DW. He urged the government to support them.

"Otherwise, we will die." 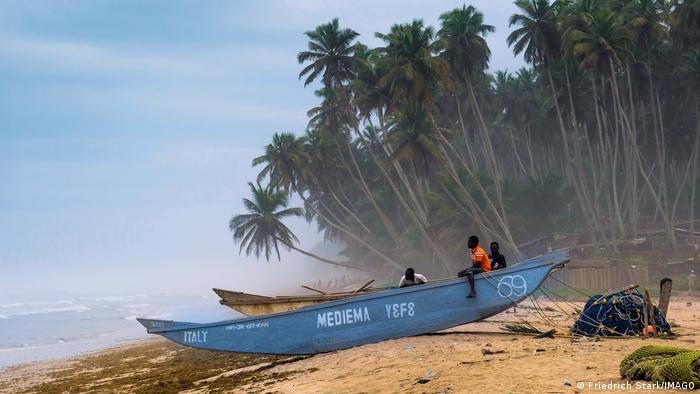 Many small fishing villages on the Ghanaian coast are below sea level. Joel Deque, an environmentalist, believes that climate change has contributed significantly to rising waters along the coast.

"The space between the lagoon and the sea is being narrowed. The sea is about to enter," Deque said. "The last tidal wave that occurred, the sea went into the lagoon, a sign that the sea could take over these places in a few years," the environment expert said, adding that they're in great danger.

Climate change experts, such as Kwasi Appeaning Addo, of the University of Ghana in Accra, say there is evidence that rising sea levels are threatening people's livelihoods.

"The intensity of storm surges has increased recently, which is due to climate change. There are higher waves, sea levels are risinng — these are natural factors driven by climate change that increase erosion," Addo told DW. 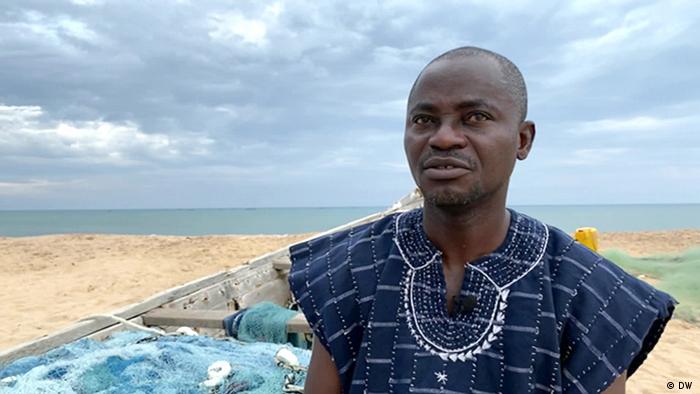 It's not just nature that contributes to erosion but humans as well. For example, sand mining on beaches is illegal, but authorities hardly enforce the ban, Addo said.

Another problem is the destruction of coastal vegetation, which is essential for combating erosion.

So how is Ghana's government remedying the situation? "They are trying to fight erosion through hard structures like breakwaters and seawalls," Addo said, adding that such measures are not sustainable. "We need to rethink how we learn to deal with erosion instead of fighting it."

In West Africa, the sea is chipping into the interior particularly fast.

"About 56% of the coastline in Benin, Ivory Coast, Senegal and Togo is exposed to an average erosion of two meters per year, which has a huge impact," Maria Sarraf,  the World Bank's practice manager for the Environment, Natural Resources and the Blue Economy in West Africa, said in a DW interview.

She also stressed that more needs to be done. Governments need to issue more warnings when flooding is imminent so residents can leave the area in time, Sarraf said.

To protect the threatened coastal regions of West Africa at least a little, the World Bank has launched a $220 million (€215 million) project that is currently benefiting six countries in the region. The money is being used to build dams and coastal fortifications, restore wetlands, and fill in beaches.

But the investment, though critical, is only a fraction of what is needed. According to World Bank estimates, erosion, flooding and pollution cause $3.8 billion in damage annually in Benin, Ivory Coast, Senegal and Togo alone.

Not only western Africa but also other regions, such as the Nile Delta in Egypt, coasts in Kenya and East Africa, and even South African coastal towns such as Cape Town are exposed to rising sea levels and thus destructive floods.

According to the Intergovernmental Panel on Climate Change, sea levels around Africa have risen faster than the global average over the past 30 years. 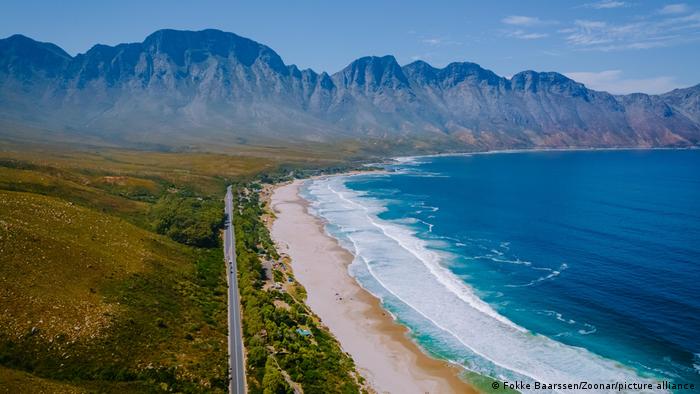 "Sea levels are now higher than ever before," explained Callum Munday, a climate scientist at the University of Oxford.

"This is caused by the warming of the planet and the melting of more land ice. As water warms, it also expands, which contributes to the high sea levels," he told DW. "From a scientific point of view, however, we are only at the beginning of understanding the climate hazards in detail."

Munday said that Africa has been dealing with droughts and rainfall shortages for centuries, but global warming means there are now more fluctuations.

"We need to learn more about these weather systems so we can take more concrete steps for the future," Munday stressed.

That would include more Western responsibility and investment in climate change adaptation. Among other things, money should flow to the Global South via a climate reparation fund — this is anchored in the 2015 Paris climate agreement but has yet to be substantiated at a subsequent annual world climate summit.

Munday stressed that the window of time for change is closing — fast: "By 2050, the seas are supposed to rise by half a meter. That sounds like there's still time, but it's a fallacy."

Isaac Kaledzi contributed to this article. This article was translated from German.

Bangladesh is one of the countries most vulnerable to climate catastrophes. But, there are several initiatives to help local communities, particularly women, overcome the effects of climate-related problems.