A museum cleaning lady has managed to remove what she saw as a pesky beige stain lining a plastic tub in an art installation. But the museum says that now the piece, worth 800,000 euros, is ruined. 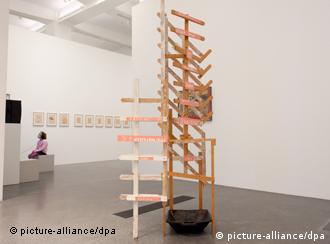 The cleaning lady cleaned the piece a little too well

The cleaning lady at a museum in the German city of Dortmund thought she was just doing her job when she managed to scrub away the thin layer of beige lining the bottom of a plastic tub in one of the installations being shown. Instead, she ruined the valuable artwork, according to a city spokeswoman, Dagmar Papajewski.

"It is now impossible to return it to its original state," she said.

The installation, "When it Starts Dripping From the Ceiling," was created by the late Martin Kippenberger in 1987. A tower of slats stands over the tub. A layer of beige paint inside the tub was meant to represent dried rain water.

The piece was valued at 800,000 euros ($1.1 million) and had been on loan to the museum from a private collection since the beginning of the year.

According to Papajewski, cleaning crews were required to stay 20 centimeters (8 inches) away from all artworks. This woman, however, worked for external company, and it was not clear if she had been told of the rule.

Kippenberger was born in Dortmund in 1953. He died of liver cancer in Vienna in 1997.

He isn't the only artist in Germany whose works have been cleaned up beyond recognition. In 1986 a 400,000-euro grease stain by Josef Beuys was simply mopped up in Duesseldorf. In 1973 two women cleaned up a baby bathtub Beuys had wrapped in gauze and bandages so they could use the container to wash dishes after an event.

The German painter Gerhard Richter has long been considered one of the most significant contemporary artists in the world. A new documentary film offers a rare glimpse of the artist at work in his studio. (08.09.2011)

Susan Philipsz stirred controversy last year when her sound installation won the prestigious Turner Prize. Now her largest installation to date is on show at the Ludwig Forum in Aachen. (11.07.2011)