Civilian casualties in Afghanistan have reached a record high in the first half of this year, the United Nations says. Children are paying a heavy price as insurgent groups launch indiscriminate attacks. 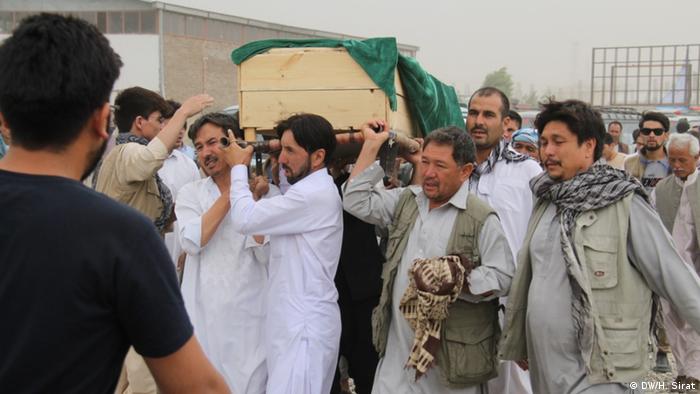 Civilians are being killed and wounded in record numbers in Afghanistan, a new UN report released Monday. The release of the report comes just two days after twin blasts killed at least 80 people and injured more than 230, most of them civilians, at a peaceful political rally in Kabul.

Those casualties - claimed by the self-styled "Islamic State" - were not part of the UN's latest tally.

The report found that, between January and June, the UN documented 1,601 civilian deaths and 3,565 injured civilians. This represents an increase of 4 percent in the total number of casualties compared to the same period last year, the UN Assistance Mission in Afghanistan said.

"Every civilian casualty represents a failure of commitment and should be a call to action for parties to the conflict to take meaningful, concrete steps to reduce civilians' suffering and increase protection," Tadamichi Yamamoto, the top UN official in Afghanistan, said in the report.

Anti-government groups - the largest being the Taliban - accounted for at least 60 percent of non-combatants killed and wounded. The Taliban, the report said, "continued using indiscriminate tactics, including carrying out devastating complex and suicide attacks in civilian areas".

But Afghan forces were responsible for more than 20 percent of casualties overall, and the international troops remaining in the country caused 2 percent, while 17 percent of deaths could not be attributed to any specific side.

For the first time, the Afghan air force killed or wounded more civilians than did air strikes carried out by international forces, the UN said.

UN officials said they had heard more commitments by both sides, but few effective actions to improve protection of civilians.

"Platitudes not backed by meaningful action ring hollow over time. History and the collective memory of the Afghan people will judge leaders of all parties to this conflict by their actual conduct," Yamamoto said.

More than 1,500 children were killed and wounded by the war, in the highest toll ever recorded in Afghanistan in a six-month period by the United Nations.

Most civilians were caught up in ground clashes between the two sides as the Taliban increasingly threatened population centers and government troops went on the offensive following the withdrawal of most international combat troops in 2014.

Casualties caused by roadside bombs decreased dramatically, by 21 percent, a drop the UN attributed to the evolving nature of the conflict, as well as better bomb-detection by the government.

Air strikes by international forces, comprised mostly of US warplanes, caused 38 deaths and 12 injuries among civilians, the UN reported.

Ash Carter: More powers for US military commanders in Afghanistan

US commanders in Afghanistan will have more authority to strike the Taliban, the US defense secretary has said. Ash Carter, who is on a surprise visit to Kabul, urged NATO to expand support in the war against extremists. (12.07.2016)